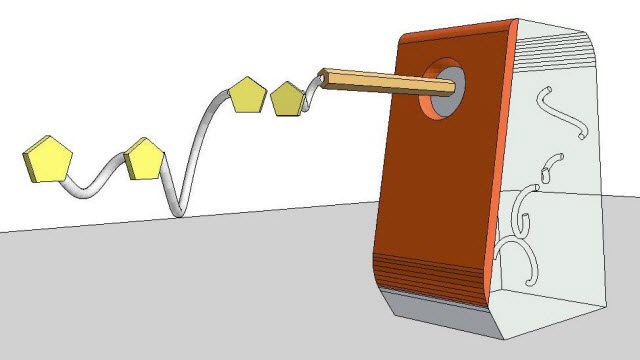 In this depiction of a "molecular pencil sharpener," the pentagons are chemicals that make a "warhead" toxic once it is "sharpened" by Tld—bacterial proteins. The proteins are inactive until a "leader"—the pencil wood surrounding the graphite in this portrayal—is removed. The wood shavings inside the sharpener are the remains of the leader being chopped up by the proteins, releasing a powerful antibiotic that kills E. coli bacteria.Image credit: Dmitry Ghilarov and David Lawson

Picture a brand-new, unsharpened pencil. The graphite at its core can’t be used for writing until a pencil sharpener chews away its wooden tip.

Now picture microcin B17, an antibiotic that kills E. coli bacteria. Before being activated, it lies embedded in a structure called a prodrug, like the core of an unsharpened “molecular pencil.”

Now, for the first time, scientists at Rutgers University–New Brunswick and other institutions have discovered a “molecular pencil sharpener” that chews away its outer coating to release the powerful antibiotic. Their discovery opens the door to finding new antibacterial agents and drugs to fight toxins.

“We think this may be a gizmo that bacteria use to activate processes which are dormant until the moment is right, when the pencil sharpener gets turned on and releases antibiotics,” said Konstantin Severinov, senior author of a new study and principal investigator in the Waksman Institute of Microbiology at Rutgers University-New Brunswick.

The scientists, whose discovery was published in the journal Structure, studied TldD and TldE bacterial proteins involved in making microcin B17.

“It’s like a future drug and when the need arises and when the going gets tough, the drug is activated and it’s like a toxic warhead that gets exported outside the cell and kills its harmful neighbors,” he said.

The prodrug examined by the scientists is like a stick with two parts, he said. The core part is the toxic warhead. A “leader” is on the other end and prevents the warhead from functioning until the right time.

“TldD, the protein we studied, has a hole in it just like in an old pencil sharpener, where the prodrug is fed into,” Severinov said. “The sharpener adds the last finishing touch, chewing the leader, activating the toxic warhead and kicking it out of the cell. So it’s almost like having an ability to produce toxic compounds, including antibiotics, a la carte when you need them.”

Tld genes are common in bacteria, suggesting that they play an important function in bacterial physiology, the study says. That might include a role in protein quality control and activating different natural products including antibiotics, such as microcin B17.

“Every bacterial genome sequenced to date has Tld genes,” Severinov said. “Nobody knew what they do, and now we know what they do in one case, and we think that similar functions activate the production of bioactive compounds used by other bacteria as antibiotics or toxins.”

Some toxins could be used in a beneficial way, he noted. For example, people have been using bacterial toxins to kill insects for decades. And when bacteria produce toxins that harm humans, drugs that inhibit Tld and fight such bacteria could be developed.

The scientists speculate that their findings could lead to future applications in the protein engineering and synthetic biology fields.