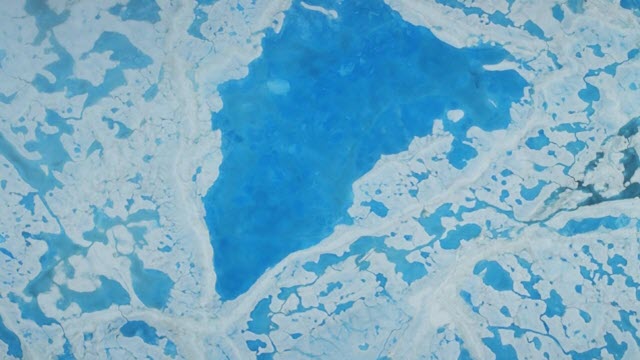 A large pool of meltwater over sea ice in the Beaufort SeaCredit: NASA/Operation IceBridge

The Beaufort Gyre is an enormous, 600-mile-wide pool of swirling cold, fresh water in the Arctic Ocean, just north of Alaska and Canada. In the winter, this current is covered by a thick cap of ice. Each summer, as the ice melts away, the exposed gyre gathers up sea ice and river runoff, and draws it down to create a huge reservoir of frigid fresh water, equal to the volume of all the Great Lakes combined.

Scientists at MIT have now identified a key mechanism, which they call the "ice-ocean governor," that controls how fast the Beaufort Gyre spins and how much fresh water it stores. In a paper published today in Geophysical Research Letters, the researchers report that the Arctic's ice cover essentially sets a speed limit on the gyre's spin.

In the past two decades, as temperatures have risen globally, the Arctic's summer ice has progressively shrunk in size. The team has observed that, with less ice available to control the Beaufort Gyre's spin, the current has sped up in recent years, gathering up more sea ice and expanding in both volume and depth.

If global temperatures continue to climb, the researchers expect that the mechanism governing the gyre's spin will diminish. With no governor to limit its speed, the researchers say the gyre will likely transition into "a new regime" and eventually spill over, like an overflowing bathtub, releasing huge volumes of cold, fresh water into the North Atlantic, which could affect the global climate and ocean circulation.

"This changing ice cover in the Arctic is changing the system which is driving the Beaufort Gyre, and changing its stability and intensity," says Gianluca Meneghello, a research scientist in MIT's Department of Earth, Atmospheric and Planetary Sciences. "If all this fresh water is released, it will affect the circulation of the Atlantic."

Meneghello is a co-author of the paper, along with John Marshall, the Cecil and Ida Green Professor of Oceanography, Jean-Michel Campin and Edward Doddridge of MIT, and Mary-Louise Timmermans of Yale University.

There have been a handful of times in the recorded past when the Beaufort Gyre has spilled over, beginning with the Great Salinity Anomaly in the late 1960s, when the gyre sent a surge of cold, fresh water southward. Fresh water has the potential to dampen the ocean's overturning circulation, affecting surface temperatures and perhaps storminess and climate.

Similar events could transpire if the Arctic ice controlling the Beaufort Gyre's spin continues to recede each year.

"If this ice-ocean governor goes away, then we will end up with basically a new Arctic ocean," Marshall says.

"Nature has a natural governor"

The researchers began looking into the dynamics of the Beaufort Gyre several years ago. At that time, they used measurements taken by satellites between 2003 and 2014, to track the movement of the Arctic ice cover, along with the speed of the Arctic wind. They used these measurements of ice and wind speed to estimate how fast the Beaufort Gyre must be downwelling, or spinning down beneath the ice. But the number they came up with was much smaller than what they expected.

"We thought there was a coding error," Marshall recalls. "But it turns out there was something else kicking back." In other words, there must be some other mechanism that was limiting, or slowing down, the gyre's spin.

The team recalculated the gyre's speed, this time by including estimates of ocean current activity in and around the gyre, which they inferred from satellite measurements of sea surface heights. The new estimate, Meneghello says, was "much more reasonable."

In this new paper, the researchers studied the interplay of ice, wind, and ocean currents in more depth, using a high-resolution, idealized representation of ocean circulation based on the MIT General Circulation Model, built by Marshall's group. They used this model to simulate the seasonal activity of the Beaufort Gyre as the Arctic ice expands and recedes each year.

They found that in the spring, as the Arctic ice melts away, the gyre is exposed to the wind, which acts to whip up the ocean current, causing it to spin faster and draw down more fresh water from the Arctic's river runoff and melting ice. In the winter, as the Arctic ice sheet expands, the ice acts as a lid, shielding the gyre from the fast-moving winds. As a result, the gyre spins against the underside of the ice and eventually slows down.

"The ice moves much slower than wind, and when the gyre reaches the velocity of the ice, at this point, there is no friction—they're rotating together, and there's nothing applying a stress [to speed up the gyre]," Meneghello says. "This is the mechanism that governs the gyre's speed."

"In mechanical systems, the governor, or limiter, kicks in when things are going too fast," Marshall adds. "We found nature has a natural governor in the Arctic."

"In a warming world"

Marshall and Meneghello note that, as Arctic temperatures have risen in the last two decades, and summertime ice has shrunk with each year, the speed of the Beaufort Gyre has increased. Its currents have become more variable and unpredictable, and are only slightly slowed by the return of ice in the winter.

"At some point, if this trend continues, the gyre can't swallow all this fresh water that it's drawing down," Marshall says. Eventually, the levee will likely break and the gyre will burst, releasing hundreds of billions of gallons of cold, fresh water into the North Atlantic.

An increasingly unstable Beaufort Gyre could also disrupt the Arctic's halocline—the layer of ocean water underlying the gyre's cold freshwater, that insulates it from much deeper, warmer, and saltier water. If the halocline is somehow weakened by a more instable gyre, this could encourage warmer waters to rise up, further melting the Arctic ice.

"This is part of what we're seeing in a warming world," Marshall says. "We know the global mean temperatures are going up, but the Arctic tempertures are going up even more. So the Arctic is very vulnerable to climate change. And we're going to live through a period where the governor goes away, essentially."