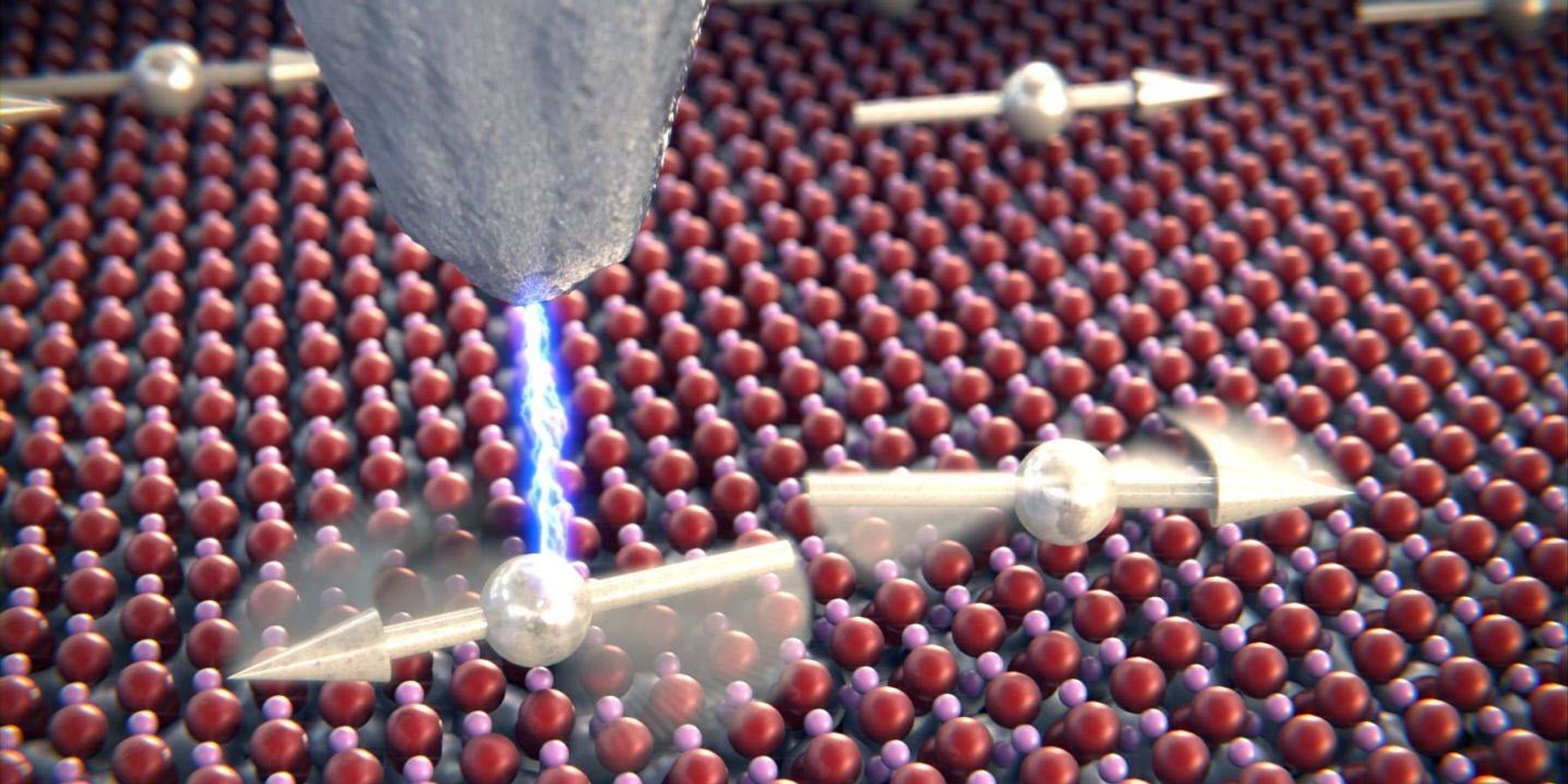 Quantum systems are considered extremely fragile. Even the smallest interactions with the environment can result in the loss of sensitive quantum effects. In the journal Science, however, researchers from Delft University of Technology  (TU Delft), RWTH Aachen University, and Forschungszentrum Jülich (Jülich Research Center) now present an experiment in which a quantum system consisting of two coupled atoms behaves surprisingly stable under electron bombardment. The experiment indicates that special quantum states might be realized in a quantum computer more easily than previously thought.

The so-called decoherence is one of the greatest enemies of the quantum physicist. Experts understand by this the decay of quantum states. This inevitably occurs when the system interacts with its environment. In the macroscopic world, this exchange is unavoidable, which is why quantum effects rarely occur in daily life. The quantum systems used in research, such as individual atoms, electrons or photons, are better shielded, but are fundamentally similarly sensitive.

"Systems subject to quantum physics, unlike classical objects, are not sharply defined in all their properties. Instead, they can occupy several states at once. This is called superposition," Markus Ternes explains. "A famous example is Schrödinger's thought experiment with the cat, which is temporarily dead and alive at the same time. However, the superposition breaks down as soon as the system is disturbed or measured. What is left then is only a single state, which is the measured value," says the quantum physicist from Forschungszentrum Jülich and RWTH Aachen University.

Given this context, the experiment that researchers at TU Delft have now carried out seems all the more astonishing. Using a new method, they succeeded for the first time in real-time observing how two coupled atoms freely exchange quantum information, switching back and forth between different states in a flip-flop interaction.

"Each atom carries a small magnetic moment called spin. These spins influence each other, like compass needles do when you bring them close. If you give one of them a push, they will start moving together in a very specific way," explains Sander Otte, head of the Delft team that performed the experiment.

On a large scale, this kind of information exchange between atoms can lead to fascinating phenomena. Various forms of quantum technologies are based on these. A classical example is superconductivity: the effect where some materials lose all electrical resistivity below a critical temperature.

To observe this interaction between atoms, Otte and his team chose a rather direct way: Using a scanning tunneling microscope, they placed two titanium atoms next to each other at a distance of just over one nanometer—one millionth of a millimeter. At that distance, the atoms are just able to feel each other's spin. If you ere to then twist one of the two spins, the conversation will start by itself.

Usually, this twist is performed by sending very precise radio signals to the atoms. This so-called spin resonance technique—which is quite reminiscent of the working principle of an MRI scanner found in hospitals—is used successfully in research on quantum bits. Among other things, quantum bits in certain types of quantum computers are programmed in such a way. However, the method has a disadvantage. "It is simply too slow," says PhD student Lukas Veldman, lead author on the Science publication. "You have barely started twisting the one spin before the other starts to rotate along. This way you can never investigate what happens upon placing the two spins in opposite directions." 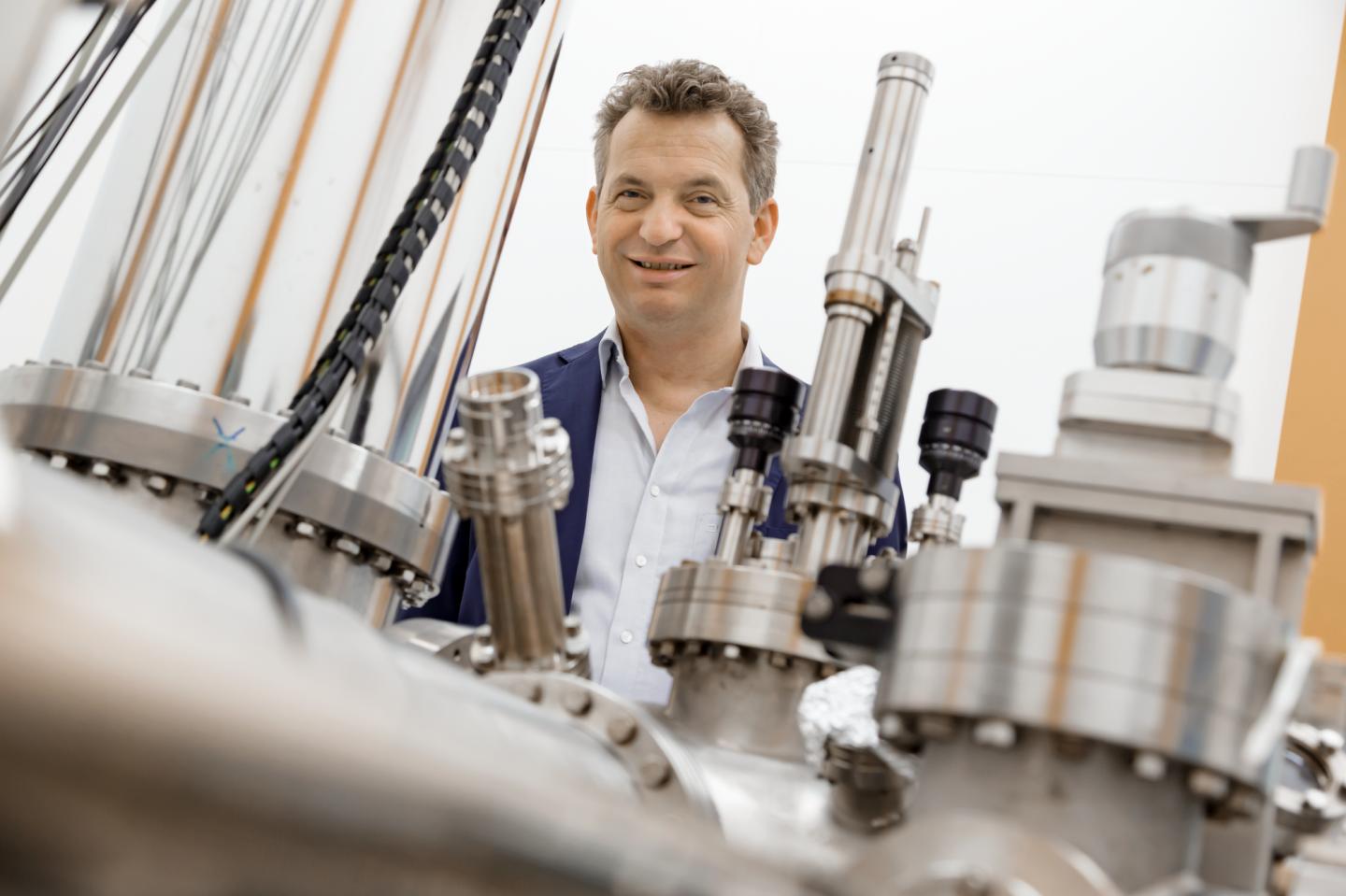 So the researchers tried something unorthodox: they rapidly inverted the spin of one of the two atoms with a sudden burst of electric current. To their surprise, this drastic approach resulted in a beautiful quantum interaction, exactly by the book. During the pulse, electrons collide with the atom, causing its spin to rotate. Otte: "But we always assumed that during this process, the delicate quantum information—the so-called coherence—was lost. After all, the electrons that you send are incoherent: the history of each electron prior to the collision is slightly different and this chaos is transferred to the atom's spin, destroying any coherence."

The fact that this now seems not to be true was cause for some debate. Apparently, each random electron, regardless of its past, can initiate a superposition: a specific combination of elementary quantum states which is fully known and which forms the basis for almost any form of quantum technology. The aspect that these electrons are still connected to their environment via their history is obviously irrelevant. What is at stake here, then, is the violation of a principle of quantum physics, according to which every measurement irretrievably destroys the superposition of quantum states.

"The crux is that it depends on the perspective," argues Markus Ternes, co-author of the Science paper. "The electron inverts the spin of one atom causing it to point, say, to the left. You could view this as a measurement, erasing all quantum memory. But from the point of view of the combined system comprising both atoms, the resulting situation is not so mundane at all. For the two atoms together, the new state constitutes a perfect superposition, enabling the exchange of information between them. Crucially for this to happen is that both spins become entangled: a particular quantum state in which they share more information about each other than classically possible."

The discovery could have far-reaching consequences for the development of quantum computers, whose function is based on the entanglement and superposition of quantum states. If one follows the findings, one could get away with being slightly less careful when initializing quantum states than previously thought. For Otte and his team at TU Delft, however, the result is above all the starting point of further exciting experiments. Veldman: "Here we used two atoms, but what happens if you use three? Or 10, or a thousand? Nobody can predict that, because the computing power [for simulating such] numbers is not sufficient."

- This press release was originally published on the Forschungszentrum Jülich website. It has been edited for style