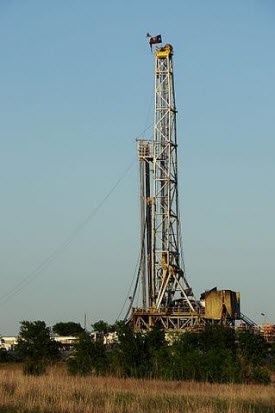 The findings appear in the journal Geochimica et Cosmochimica Acta. The research extends an earlier study by the Dartmouth team. Both PDFs are available on request.

Water injected into shale formations in hydraulic fracturing returns with extraordinarily high total-dissolved-solids and high concentrations of the toxic metal barium. The hazardous wastewater is assumed to be partly due to chemicals introduced into injected freshwater when it mixes with highly saline brine naturally present in the rock. But in their earlier study, the researchers found that chemical reactions between injected freshwater and the fractured shale itself caused barium to leach directly from the fractured rock.

In the new study, the researchers addressed the basic question of when, why, and how the Marcellus Shale became enriched in barium in the first place. They studied in detail the chemistry, mineralogy, and sulfur isotope composition of a two-inch thick core. It was a special sample as it contains about 5,000 micrograms of barium per gram of rock. Such samples are concentrated only at a few depth intervals in the Marcellus Shale. The sample provided the researchers with insight into how, when and where a barium bearing mineral (barite) altered into iron sulfide (pyrite) during the transformation of organic rich marine sediment into shale in Devonian times.

The researchers discovered barite grains being "bitten" by pyrite as the latter replaced the former through a complex set of reactions that could occur only at a very specific depth interval where both sulfate (barite) and sulfide (pyrite) are present. This interval is called the sulfate-methane transition zone, which has been identified in relatively recent sediments but not in 400 million year old sediments.

"Our new study provides insights into the generalized nature of barium mobilization as barite is dissolved in organic rich sediments and its redistribution in clay minerals," says senior author Mukul Sharma, a professor of earth sciences.