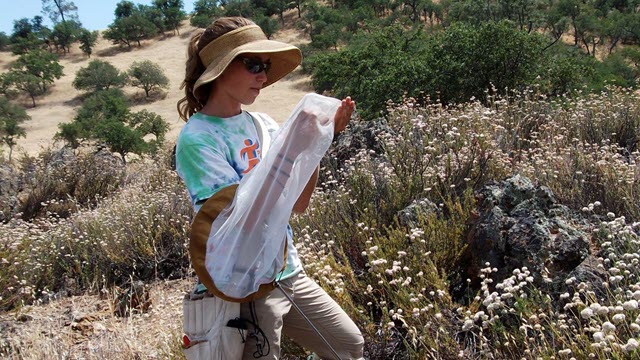 Declines in native bee populations are widely reported, but can existing data really analyze these trends? In the Jan. 17, 2019, online edition of PLOS One, Utah State University and USDA researchers report findings about pollinator biodiversity in California's Pinnacles National Park derived from data collected from three separate surveys spanning 17 years. Their results documented 450 species of wild, native bees at Pinnacles, including 48 new to the area since 2002, and 95 detected at the site in the 1990s, but now missing.

"This number of species marks the park as a national biodiversity hotspot for bees," says lead author Joan Meiners, who completed a master's degree from Utah State in 2016.

In drafting the report, Meiners and co-researchers Terry Griswold, USDA-ARS entomologist and USU adjunct faculty member and USU alum Olivia Messinger Carril, an independent scientist, who conducted the original bee surveys at Pinnacles in the 1990s, also completed a literature review of similar studies. Their efforts were supported by the National Park Service and USDA-ARS.

"We found that only 23 natural areas across the country have been systematically and exhaustively surveyed for bee biodiversity, and no others have been later replicated to compare changes over time," says Meiners, currently a doctoral student at the University of Florida-Gainesville.

She says many estimations of bee biodiversity may not be reliable given limited records from source habitats and the inherently high natural variability of wild bee species across space and time. Over seven years of collecting, no two years had more than 81 percent of species in common, suggesting limited occurrence or detectability of species year-to-year, even in the best of collecting circumstances.

Accurate inventory is critical, she says, as native bees are important agricultural pollinators, contributing some $3 billion to pollination services in the U.S. each year.

"Increased land conservation and systematic, replicated monitoring efforts, similar to those we present from Pinnacles, will be essential to accurately track the extent and nature of widespread declines in our most important pollinators," Meiners says.