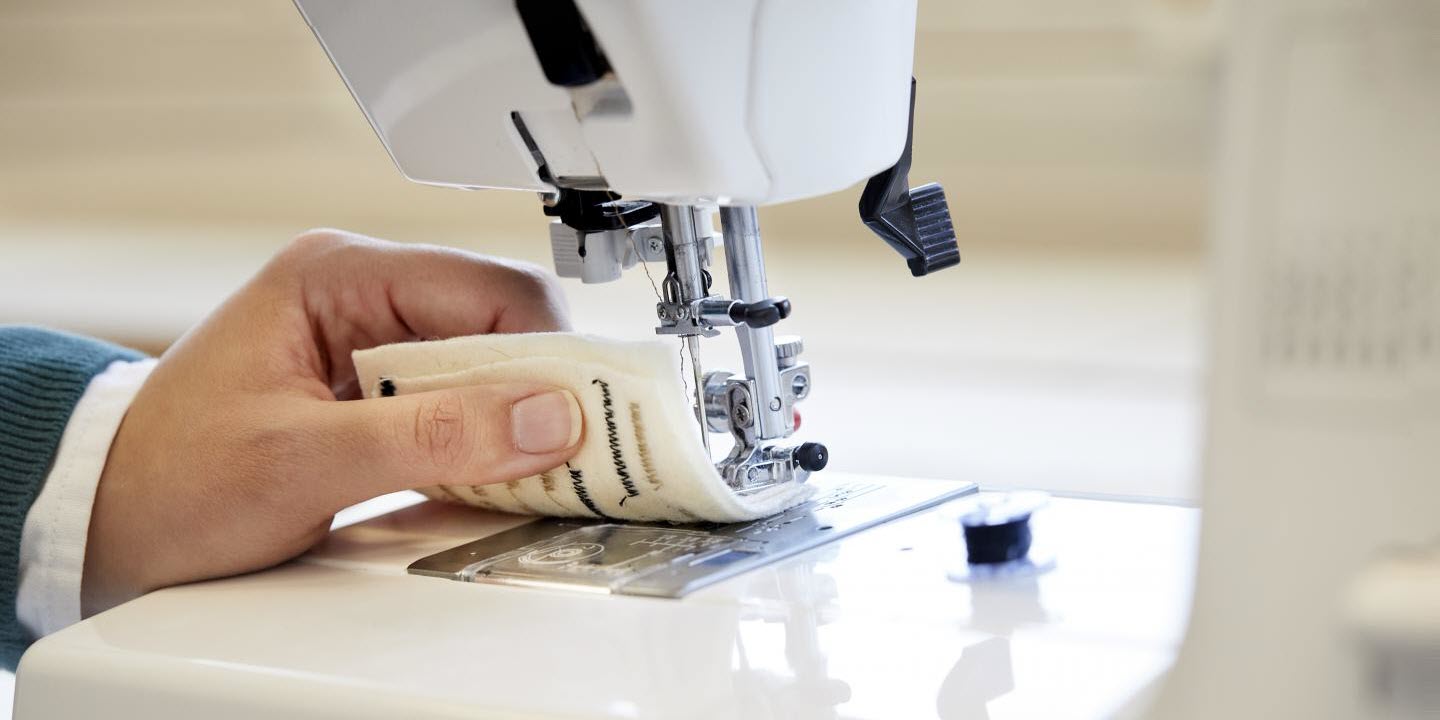 The cellulose yarn, which the researchers present in the article, is practical to work with and could be used to make clothing with smart functions. Using a standard household sewing machine, researchers have sewn the electrically conductive cellulose yarn into a fabric and succeeded in producing a thermoelectronic textile, which can produce a small amount of electricity when the textile is heated on one side, for example by a person's body heat—typically 0.2 microwatt at a temperature difference of 37 degrees Celsius.
Anna-Lena Lundqvist/Chalmers University of Technology

Electronic textiles offer revolutionary new opportunities in various fields, in particular healthcare. But to be sustainable, they need to be made of renewable materials. A research team led by Chalmers University of Technology, Sweden, now presents a thread made of conductive cellulose, which offers fascinating and practical possibilities for electronic textiles.

"Miniature, wearable, electronic gadgets are ever more common in our daily lives. But currently, they are often dependent on rare, or in some cases toxic, materials. They are also leading to a gradual build-up of great mountains of electronic waste. There is a real need for organic, renewable materials for use in electronic textiles," says Sozan Darabi, doctoral student at the Department of Chemistry and Chemical Engineering at Chalmers University of Technology and the Wallenberg Wood Science Center, and lead author of the scientific article which was recently published in ASC Applied Materials & Interfaces.

Together with Anja Lund, researcher in the same group, Sozan Darabi has been working with electrically conductive fibers for electronic textiles for several years. The focus was previously on silk, but now the discoveries have been taken further through the use of cellulose.

The results now presented by the researchers show how cellulose thread offers huge potential as a material for electronic textiles and can be used in many different ways.

Sewing the electrically conductive cellulose threads into a fabric using a standard household sewing machine, the researchers have now succeeded in producing a thermoelectric textile that produces a small amount of electricity when it is heated on one side—for example, by a person's body heat. At a temperature difference of 37 degrees Celsius, the textile can generate around 0.2 microwatts of electricity.

"This cellulose thread could lead to garments with built-in electronic, smart functions, made from non-toxic, renewable and natural materials," says Darabi. 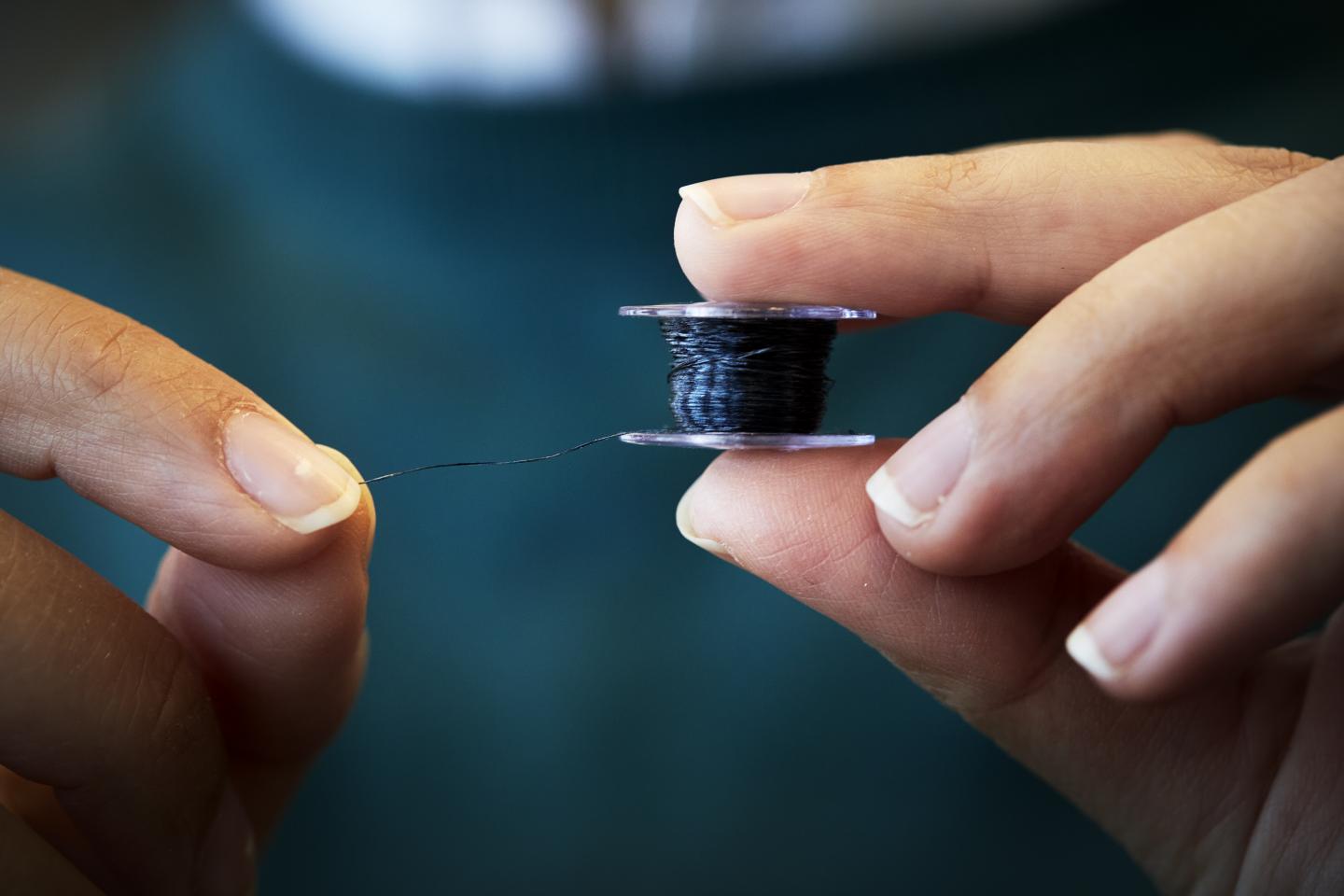 The cellulose thread is a renewable and non-toxic electrically conductive material for electronic textiles that can be sewn in an ordinary household sewing machine. It has a record-high conductivity for cellulose yarn and can handle at least five washes without losing its conductivity.
Anna-Lena Lundqvist/Chalmers University of Technology

The production process for the cellulose thread has been developed by co-authors from Aalto University in Finland. In a subsequent process, the Chalmers researchers made the thread conductive through dyeing it with an electrically conductive polymeric material. The researchers' measurements show that the dyeing process gives the cellulose thread a record-high conductivity—which can be increased even further through the addition of silver nanowires. In tests, the conductivity was maintained after several washes.

Electronic textiles could improve our lives in several ways. One important area is healthcare, where functions such as regulating, monitoring, and measuring various health metrics could be hugely beneficial.

In the wider textile industry, where conversion to sustainable raw materials is a vital ongoing question, natural materials and fibers have become an increasingly common choice to replace synthetics. Electrically conductive cellulose threads could have a significant role to play here too, the researchers say.

"Cellulose is a fantastic material that can be sustainably extracted and recycled, and we will see it used more and more in the future. And when products are made of uniform material, or as few materials as possible, the recycling process becomes much easier and more effective. This is another perspective from which cellulose thread is very promising for the development of e-textiles," says Christian Müller, research leader for the study and a professor at the Department of Chemistry and Chemical Engineering at Chalmers University of Technology.

This work of the research team from Chalmers is performed within the national research center Wallenberg Wood Science Center, in cooperation with colleagues in Sweden, Finland, and South Korea.

Both Sozan Darabi and Christian Müller believe the research has resulted in much more than just the latest scientific publication. Sozan Darabi has developed from a student into a foremost expert in electrically conductive fiber materials, something Müller views as very rewarding, and a great strength for their research team. 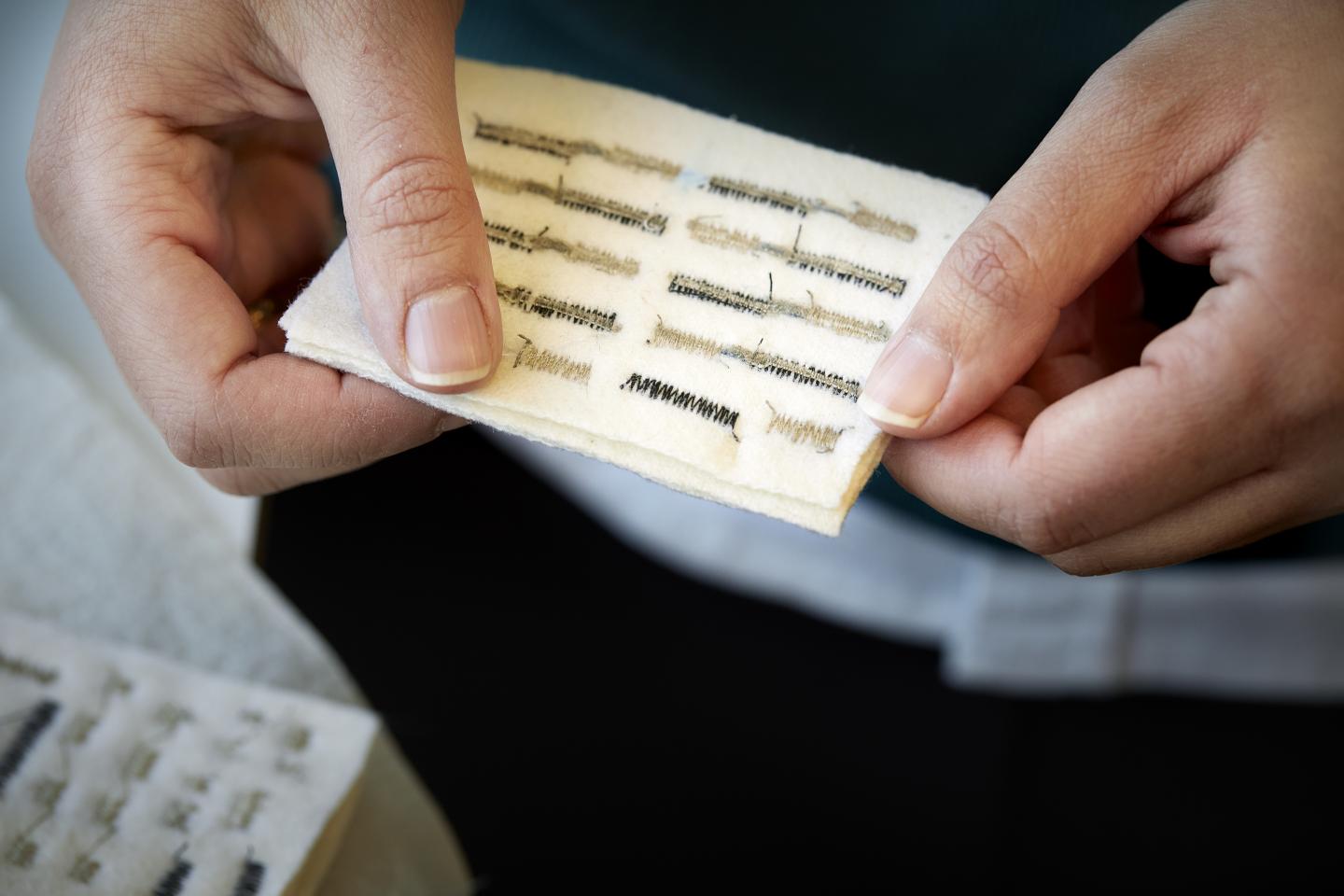 The dark yarn is the cellulose yarn and the lighter one is a commercially available silver-plated yarn, both of which are electrically conductive. The researchers have sewn the two threads separately into the fabric, in a special way that gives the fabric its thermoelectronic properties.
Anna-Lena Lundqvist/Chalmers University of Technology

Through the national Swedish research center Wallenberg Wood Science Center, a group from Stockholm's Royal Institute of Technology (KTH) has also been involved in the research and publication of the study. The KTH researchers focus on the electrochemical aspects of the fibers. Together with this group from KTH, the Chalmers research team is now planning ways to take the ideas to the next level.

The electrically conductive yarn is produced in a "layer-on-layer" coating process with an ink based on the biocompatible polymer "polyelectrolyte complex poly(3,4-ethylenedioxythiophene):poly(styrene sulfonate) (PEDOT: PSS)." The e-textile thread developed by the researchers measures a record-high conductivity for cellulose thread in relation to volume of 36 S/cm-, which can be increased to 181 S/cm by adding silver nanowires. The thread coated with PEDOT: PSS can handle at least five machine washes without losing its conductivity. By integrating the cellulose yarn into an electrochemical transistor, the researchers have also been able to demonstrate its electrochemical function.

More about: textiles from nature and fashion industry interest

Throughout human history, textiles have been made from natural fiber and cellulose. But since the middle of the 20th century, synthetic fibers have become more common in our clothing, particularly in the fashion industry. With the greater focus and awareness now on sustainable alternatives, interest in natural fibers and textiles is returning and growing. Large Swedish chains such as H&M and Lindex have set high goals for increasing the proportion of garments produced from more sustainable materials.

The cellulose fiber that the researchers have used is of the Ioncell® type, developed by the Finnish group, led by professor and co-author Herbert Sixta.

- This press release was originally published on the Chalmers University of Technology website. It has been edited for style