Society of Environmental Toxicology and Chemistry 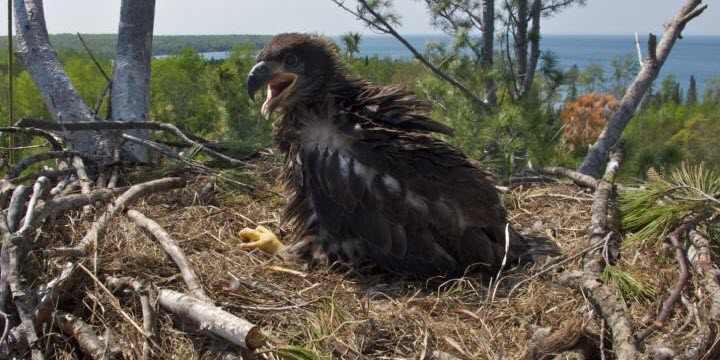 Eight-week-old bald eagle nestling in its nest overlooking Lake Superior from Apostle Islands National Lakeshore. The study targeted five- to eight-week-old nestlings because they can thermoregulate at that age without a parent and they are unlikely to take a risky flight from the nest when the climber approaches.
Jim Campbell-Spickler

Research published in Environmental Toxicology and Chemistry shows that the presence of polybrominated diphenyl ethers (PBDEs) in bald eagle populations is slowly declining. Bald eagles are apex predators that nest and, more importantly, feed along water bodies, making them excellent bioindicators of environmental contaminants that bioaccumulate up the aquatic food web. The findings are both good news for eagles and instructive for regulators tasked with managing surface water quality by setting protective levels for wildlife, as well as fish consumption advisories for humans.

Lead author Bill Route from the National Park Service Great Lakes Inventory and Monitoring Network, explained, "Bald eagles are similar to humans in that both are tertiary predators in aquatic systems. The patterns we observed in nestlings may be indicative of those in humans who consume fish from the same water bodies."

Introduced in the 1970s, PBDEs were designed as flame retardants and come in three primary formulations: penta-BDE, used primarily in furniture and cars; octa-BDE, used mainly in the electronics industry; and deca-BDE, used in a variety of appliances. Penta- and octa-BDE were phased out of use in the early 2000s and banned internationally in 2009 under the Stockholm Convention. Deca-BDEs were reduced and ultimately eliminated from manufacturing by 2013. Despite the regulations, PBDEs are still present in many products and continue to find their way into the environment. These chemical compounds are hydrophobic, which means they do not dissolve in water; instead, they stick to particles and settle at the bottom of rivers and lakes, where they are ingested by animals. Since they don't easily dissolve in water, they tend to sequester and accumulate in fatty tissue and subsequently get passed up the food chain.

Route and his co-authors assessed patterns and trends in PBDE concentrations in 492 bald eagle nestlings' blood samples from 241 territories across 12 study areas in Minnesota and Wisconsin. This work built upon previous studies in the same region, which enabled the authors to reveal trends. Perhaps unsurprisingly, the highest levels of PBDEs were found in urban areas, such as Minneapolis-St. Paul, and the lowest concentrations were in sparsely populated areas. However, overall, the research shows a sustained 3.8 percent annual rate of decline in the concentrations of five primary PBDEs in the samples collected across the region since PBDE production was reduced.

- This press release was supplied by the Society of Environmental Toxicology and Chemistry. It has been edited for style