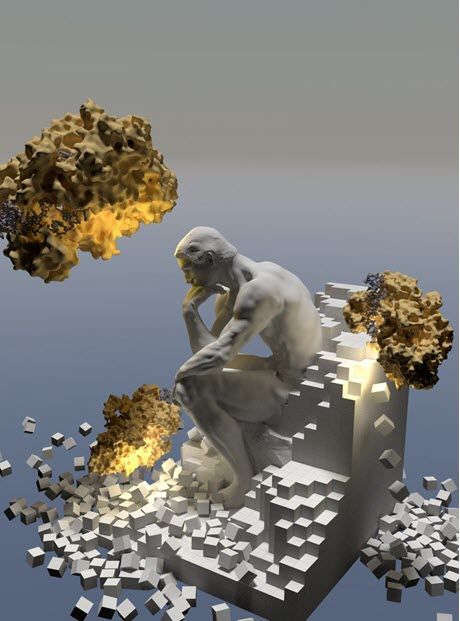 Reminiscent of Auguste Rodin's credo 'I choose a block of marble and chop off whatever I don't need,' the Wyss Institute and MIT team used the CRISPR-Cas system (yellow-brownish structures) to alter biomaterials by selective removal of single-stranded DNA cross-linkers that are attached to hydrogels or hold them together. This approach enables the stimulus-specific release of chemical compounds, active enzymes, nanoparticles and cells, as well as materials that can convert biological into electric information.Credit: Peter Q. Nguyen/Wyss Institute at Harvard University(BOSTON) — The CRISPR-Cas system has become the go-to tool for researchers who study genes in an ever-growing list of organisms, and is being used to develop new gene therapies that potentially can correct a defect at a single nucleotide position of the vast reaches of the genome. It is also being harnessed in ongoing diagnostic approaches for the detection of pathogens and disease-causing mutations in patients.

Now, reporting in Science, a research team at Harvard's Wyss Institute for Biologically Inspired Engineering and the Massachusetts Institute of Technology (MIT) demonstrates the use of CRISPR as a control element in a new type of stimuli-responsive "smart" materials. Upon activation by specific natural or user-defined DNA stimuli, a CRISPR-Cas enzyme enables a variety of smart materials to release bound cargo such as fluorescent dyes and active enzymes, change their structures to deploy encapsulated nanoparticles and live cells, or regulate electric circuits thereby converting biological into electric signals.

"Our study shows that the power of CRISPR can be harnessed outside of the laboratory for controlling the behavior of DNA-responsive materials. We developed a range of materials with very different capabilities that highlight the breadth of applications enabled by programmable CRISPR-responsive smart materials," said Wyss Institute Founding Core Faculty member James Collins, PhD, who led the study and is a leader of the Institute's Living Cellular Devices platform. "These applications include novel theranostic strategies, point-of-care diagnostics, and the regional monitoring of epidemic outbreaks and environmental hazards." Collins also is the Termeer Professor of Medical Engineering & Science and a Professor of Biological Engineering at MIT.

The CRISPR-Cas system has gained its fame because of its ability to find almost any target sequence in the genome with the help of a short complementary guide-RNA (gRNA), and to cut and repair the DNA double strand with surgical precision. In the present study, the team leveraged a Cas enzyme variant known as Cas12a from a Lachnospiraceae bacterium that has the same ability to recognize and cut specific DNA sequences but, activated by this event, importantly, carries on to non-specifically cleave single-stranded DNA in its vicinity at a rate of about 1250 turnovers per second.

"We incorporated single-stranded target DNA sequences into polymeric materials, either as anchors for pendant cargos, or as structural elements that maintain the materials' basic integrity, and can control different material behaviors just by providing Cas12a together with a specific gRNA as a stimulus," said co-first author Max English, who is an MIT graduate student working with Collins.

In one variation of their concept, the researchers attached different payloads via double-stranded DNA anchor sequences to a so-called poly(ethylene glycol) hydrogel material. "The anchor sequences are targeted by nearby Cas12a enzymes in the presence of complementary gRNAs, and are then degraded," said co-first author Helena de Puig, PhD, a post-doctoral researcher on Collins' team. "As a result, we can release payloads like fluorescent molecules and enzymes at rates that depend on the relative affinities of gRNA/target DNA pairs, as well as properties hard-coded into the gels, such as their pore sizes, and the densities of targeted anchor sequences cross-linked to the gel material." The authors think that this approach could be used, for example, to develop materials with diagnostic capabilities and for environmental monitoring.

At larger scales, the team investigated their approach for prompting structural changes in polyacrylamide hydrogels (PA) that encapsulated nanoparticles and live cells. "Here, we used Cas12a target sequences to cross-link PA strands to each other and thus to function as structural elements. Removing the cross-linkers by triggering Cas12a activity stimulates mechanical changes throughout the entire gel matrix, which allowed gold nanoparticles and human primary cells to be released," said Raphael Gayet, another co-first author and graduate student in Collins group. "This approach could be utilized to release cells into tissue scaffolds."

On yet a different avenue, Collins and his team engineered CRISPR-responsive smart materials that can act as electric fuses and controllable valves regulating the passage of fluids. The researchers covered electrodes with a mixture of nanoparticles made of carbon black, a good conductor of electricity, and random single-stranded DNA fragments, and surrounded the electrodes with a solution containing Cas12a and a specific double-stranded target DNA. "The material by itself enabled an electric current to run between the electrodes. However, when we triggered Cas12a-dependent degradation of the embedded DNA, the material became disrupted and the current interrupted," said co-author Nicolaas Angenent-Mari from Collins' team.

In paper-based microfluidic devices, the team assembled a stack of folded micro-pads that each carried out a specific function. They pre-reacted a DNA cross-linked PA gel with Cas12a in the absence or presence of a Cas12a-specific double-stranded DNA trigger and covered a middle pad with it. However, the gel formed only in the absence of a Cas12a-triggering DNA, and when applied to the pad, clogged its pores. This in turn blocked the flow of a buffer carrying electrolytes from the top to the bottom of the stack where an electrode was located. In contrast, the presence of a Cas12a-triggering DNA prevented the gel to be cross-linked and thus enabled the buffer to flow and cause a current across the electrode, essentially acting as a resistor. "With this approach, we coupled the detection of DNA corresponding to ebola virus-specific RNA with an electric signal and even transmit the signal with a coupled RFID antenna in real time," said Luis Soenksen, also a co-first author on the study.

"This breakthrough study by James Collins and his team in the Wyss Institute's Living Cellular Devices platform demonstrates the value of CRISPR technology for entirely new fields, ranging from diagnostics and theragnostics to bioelectronics, and marks yet another inspiring inflection point for biomedical developments enabled by this bioinspired technology," said Wyss Institute Founding Director Donald Ingber, MD, PhD, who is also the Judah Folkman Professor of Vascular Biology at HMS, the Vascular Biology Program at Boston Children's Hospital, and professor of bioengineering at Harvard's John A. Paulson School of Engineering and Applied Sciences (SEAS).