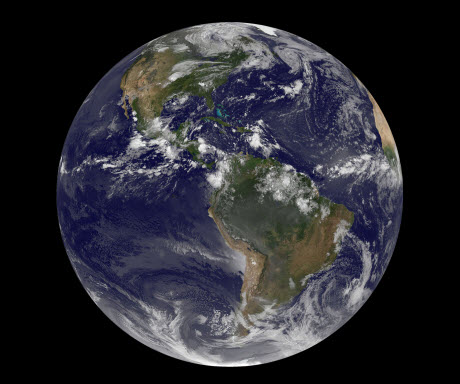 An analysis in the journal Science discusses the effects of measures under discussion to reduce greenhouse gas emissions.Image courtesy of NASACOLLEGE PARK, Md. – More than 190 countries are meeting in Paris this week to create a durable framework for addressing climate change and to implement a process to reduce greenhouse gases over time. A key part of this agreement would be the pledges made by individual countries to reduce their emissions.

A study published in Science on Nov. 26 shows that if implemented and followed by measures of equal or greater ambition, the Paris pledges have the potential to reduce the probability of the highest levels of warming, and increase the probability of limiting global warming to 2 degrees Celsius.

In the lead up to the Paris meetings, countries have announced the contributions that they are willing to make to combat global climate change, based on their own national circumstances. These Intended Nationally Determined Contributions, or INDCs, take many different forms and extend through 2025 or 2030.

Examples of these commitments include the United States' vow to reduce emissions in 2025 by 26-28 percent of 2005 levels and China's pledge to peak emissions by 2030 and increase its share of non-fossil fuels in primary energy consumption to around 20 percent. In the study, the scientists tallied up these INDCs and simulated the range of temperature outcomes the resulting emissions would bring in 2100 under different assumptions about possible emissions reductions beyond 2030.

"We wanted to know how the commitments would play out from a risk management perspective," said economist Allen Fawcett of the U.S. Environmental Protection Agency, the lead author of the study. "We analyzed not only what the commitments would achieve over the next ten to fifteen years, but also how they might lay a foundation for the future."

Although many researchers have focused on the importance of the 2 degree limit, Fawcett and colleagues assessed uncertainty in the climate change system from an overall risk management perspective. They analyzed the full range of temperatures the INDCs might attain, and determined the odds for achieving each of those temperatures. To determine odds, they modeled the future climate hundreds of times to find the range of temperatures these various conditions produce.

"It's not just about 2 degrees," said Gokul Iyer, the study's lead scientist at the Joint Global Change Research Institute, a collaboration between the Department of Energy's Pacific Northwest National Laboratory and the University of Maryland. "It is also important to understand what the INDCs imply for the worst levels of climate change."

In the study, the scientists compare the Paris commitments to a world in which countries don't act at all or start reducing greenhouse gas emissions only in 2030.

The team found that if countries do nothing to reduce emissions, the earth has almost no chance of staying under the 2 degree limit, and it is likely that the temperature increase would exceed 4 degrees. They went on to show that the INDCs and the future abatement enabled by Paris introduce a chance of meeting the 2 degree target, and greatly reduce the chance that warming exceeds 4 degrees. The extent to which the odds are improved depends on how much emissions limits are tightened in future pledges after 2030.

"Long-term temperature outcomes critically hinge on emissions reduction efforts beyond 2030," said Iyer. "If countries implement their INDCs through 2030 and ramp up efforts beyond 2030, we'll have a much better chance of avoiding extreme warming and keeping temperature change below 2 degrees Celsius. It's important to know that the INDCs are a stepping stone to what we can do in the future."

To perform the analysis, the team incorporated the INDCs along with assumptions about future emissions reductions into a global, technologically detailed model of the world called the Global Change Assessment Model or GCAM that includes energy, economy, agriculture and other systems. The GCAM model produced numbers for global greenhouse gas emissions, which the team then fed into a climate model called Model for the Assessment of Greenhouse-gas Induced Climate Change or MAGICC. Running the simulations for each scenario 600 times resulted in a range of temperatures for the year 2100, which the team converted into probabilities.

Iyer said the next thing to look at is the question of the kinds of policies and institutional frameworks that could pave the way for a robust process that enables emissions reduction efforts to progressively increase over time.

This work was supported by the Global Technology Strategy Program, the William and Flora Hewlett Foundation, the Department of State, and the Environmental Protection Agency.