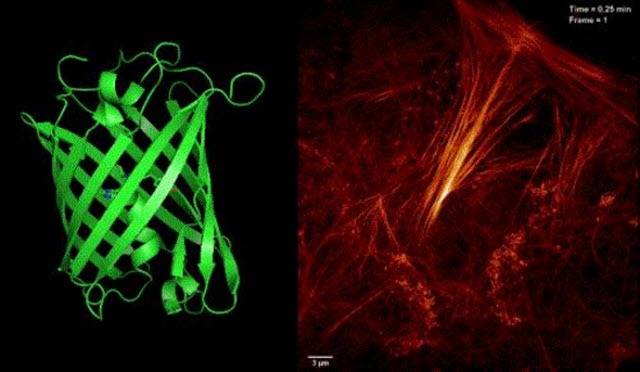 To understand the cell, it is necessary to study its dynamics at high resolution in space and time in a way that does not adversely affect it. Recently developed superresolution (SR) microscopy breaks the diffraction limit and offers the requisite spatial resolution but usually at the cost of slow imaging speed and excessive damage. Applying reversibly switchable fluorescent proteins (RSFPs) while using saturated depletion-based SR techniques, such as nonlinear structured illumination microscopy (SD NL-SIM) or reversible saturable optical fluorescence transition (RESOLFT) microscopy, greatly reduces the illumination intensity, thus enabling live-cell SR imaging.

However, one major challenge in live-cell SR is the absence of optimal fluorescent probes. Limited by the inherent optical properties of the existing switchable fluorescent proteins Dronpa and rsEGFP, such as the small number of switching cycles, low fluorescence signal, and poor contrast, it is difficult to achieve the desired resolution in live-cell SR imaging.

To circumvent the problem, Professor XU Pingyong at the Institute of Biophysics (IBP) of the Chinese Academy of Sciences recently developed a new type of monomer, RSFP Skylan-NS (sky lantern for nonlinear structured illumination).

PA NL-SIM is much more compatible with noninvasive live-cell imaging at a resolution below 100 nm than other SR modalities. This technique uses specific RSFPs, however, the properties that strongly influence their suitability for PA NL-SIM have not been enumerated, measured, and compared.

In their study, the researchers performed such a comparison, by evaluating the photophysical properties of Skylan-NS against two other RSFPs, i.e., rsEGFP2 and Dronpa, which have been used previously in the SR imaging modalities of RESOLFT and SD NL-SIM, respectively.

They further demonstrated the superiority of Skylan-NS for PA NL-SIM by comparing the imaging performance of all three RSFPs when applied to PA NL-SIM. For the first time, they achieved low-energy (100 W/cm2), high-sampling speed (sub-second level), high-resolution (~ 60 nm) and long-term (~30 point in time) super-resolution imaging in living cells. Due to its superiority in photostability, cycle numbers and signal-to-noise ratio, Skylan-NS is one of the best fluorescent proteins applicable to live-cell SR imaging.

The research work entitled Highly Photostable, Reversibly Photoswitchable Fluorescent Protein with High Contrast Ratio for Live-cell Superresolution Microscopy was published on line in the journal Proceedings of the National Academy of Sciences on August 23, 2016. The described fluorescent protein Skylan-NS enables substantial improvements in the speed, duration, and noninvasiveness of live-cell superresolution microscopy.