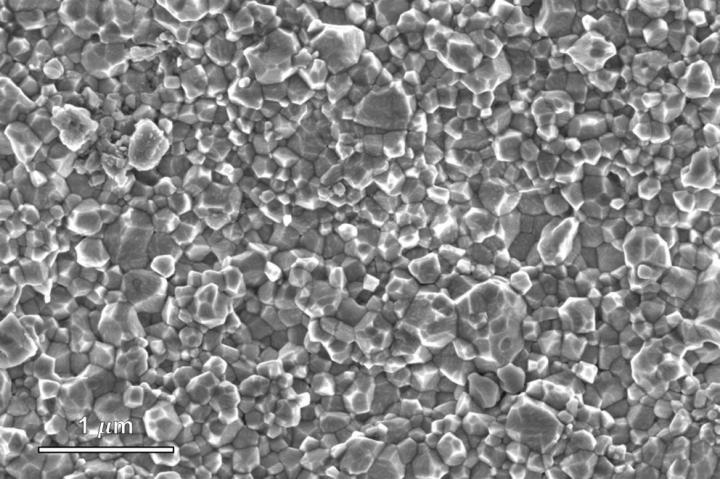 The dense microstructure of barium titanate as seen under a microscope.
Clive Randall, Penn State

Barium titanate is an important electroceramic material used in trillions of capacitors each year and found in most electronics. Penn State researchers have produced the material at record low temperatures, and the discovery could lead to more energy efficient manufacturing.

"Our work is the first example showing we can densify ferroelectric oxides in a single step," said Kosuke Tsuji, a doctoral candidate in the Department of Materials Science and Engineering at Penn State and lead author of the study. "It should open up the possibility to densify many more inorganic materials at low temperatures."

It is the first time researchers have densified barium titanate in a single step using cold sintering. Previous attempts required secondary heating to produce materials with useful dielectric properties, said the scientists, who reported their findings in the Journal of the European Ceramic Society.

Sintering is a commonly used process to compress fine powders into a solid mass of material using heat and pressure. The cold sintering process, developed by Penn State scientists, accomplishes this at much lower temperatures and in shorter times than conventional sintering. The emerging technology holds the potential to reduce the costs and environmental impacts of manufacturing a wide range of materials, according to the researchers.

"This research shows that materials that were previously difficult to sinter can now be done," said Clive Randall, professor of materials science and engineering at Penn State, who led the development of cold sintering. "It takes us to the dream that we can eventually find the right chemistry to allow all ceramic materials, and maybe even metal materials, to be cold sintered."

"These devices underpin the modern electronic world," said Randall, who also serves as director of Penn State's Materials Research Institute. "The implications of applying this technology to barium titanate are enormous. In your cell phone alone, you may have 1,000 components that are all made of barium titanate. It is ubiquitous to all electronics."

Lowering temperatures used in commercial manufacturing would not only be more energy efficient but could open the door to using less expensive metals and incorporating polymer composites into these capacitors, according to the researchers.

"This is very attractive to many of the leading capacitor companies, which are all working with these researchers through Penn State's Center for Dielectrics and Piezoelectrics (CDP)," Randall said.