Jun 23, 2021University of Illinois at Urbana-Champaign 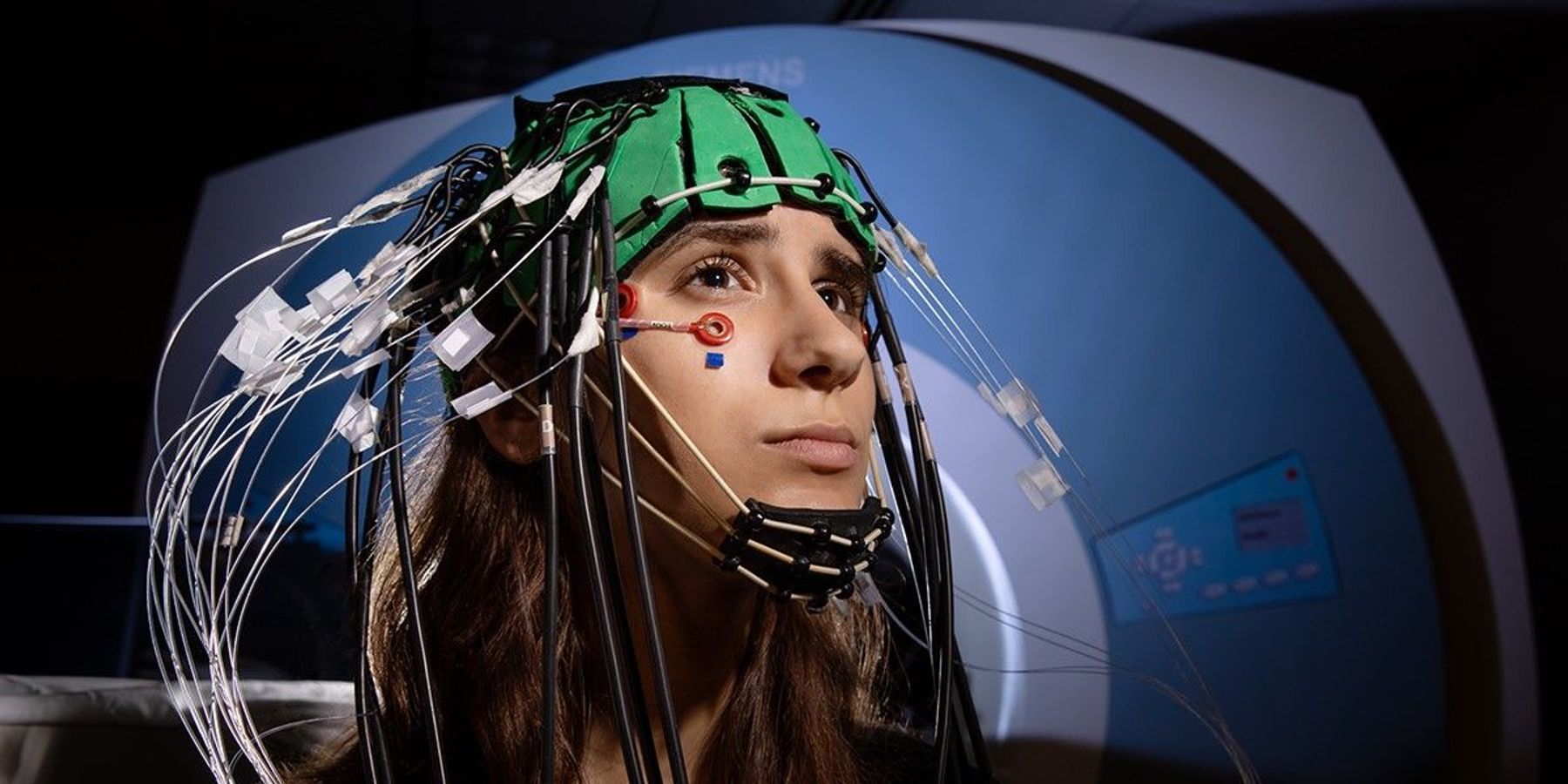 A new approach to brain imaging combines functional MRI, electroencephalography, and a technique known as EROS, which shines near-infrared light on the scalp to capture brain activity. (A young woman inside an MRI suite wears an imaging cap with many sensors attached.)
Photo by L. Brian Stauffer

CHAMPAIGN, IL — Researchers report that they have developed a method to combine three brain imaging techniques to more precisely capture the timing and location of brain responses to a stimulus. Their study is the first to combine the three widely used technologies for simultaneous imaging of brain activity. The work is reported in the journal Human Brain Mapping.

"We know that fMRI is very good at telling us where in the brain things are happening, but the signal is quite slow," said postdoctoral researcher Matthew Moore, the first author of the study, which was conducted at the University of Illinois (Illinois) Urbana-Champaign's Beckman Institute for Advanced Science and Technology. "And when we measure electrical activity through EEG, it is very good at telling us when things happen in the brain—but it's less precise about where."

The third method, EROS, provides a measure of spatial information that is similar to fMRI but, like EEG, can more accurately assess the timing of brain responses. This helps researchers fill in the blanks left by the other two technologies, Moore said. The result is a clearer picture of how different parts of the brain are activated and communicate with one another when an individual engages in a cognitive task and is distracted—in this case, by emotionally challenging information.

Functional MRI captures a signal from the flow of oxygenated blood in the brain when a person sees or responds to a stimulus. This signal is very useful for determining which brain structures are being activated, Moore said.

"Changes in blood oxygenation levels occur over a period of seconds, but the brain actually responds within hundreds of milliseconds," he said. This lag between brain activity and oxygenation signals means fMRI is unable to detect changes occurring faster than seconds.

"On the other hand, EEG is very good at telling us when things happen," Moore said. "But we're collecting from sensors placed on the scalp, and we're getting a summation of activity, so really, we're blurring across centimeters of the scalp."

The third technique, EROS, was developed by two coauthors of the new report, Illinois psychology professors Monica Fabiani and Gabriele Gratton. This method shines near-infrared light into the brain and measures changes in how the light scatters, a reflection of neural activity. EROS provides precise information about where and when the brain responds, but it can only penetrate a few centimeters below the scalp, so it cannot detect events occurring deeper in the brain, as fMRI can, the researchers said.

Combining the three techniques was no easy task. There is limited space available on the scalp for various electrodes and sensors, and the EEG and EROS equipment had to fit within an fMRI coil and could not contain any magnetic metals, the researchers said. Over a period of years, the researchers found a way to include EROS patches that could share space with EEG electrodes on the scalp. They tested different combinations of the three techniques to determine how to intertwine them and how to interpret the information coming through the different channels.

To study how the brain behaves when an individual tries to focus on a task but is distracted by emotional information, the researchers gave study participants a goal of quickly picking out circles from a series of squares and other images that had either emotionally neutral or negative content.

The imaging results revealed that various brain regions responded rapidly to the stimuli. The signals cycled back and forth between locations over parts of the prefrontal and parietal cortices, brain areas that work together to maintain attention and process distractions. This switching occurred on a time scale of hundreds of milliseconds, the researchers found.

The ability to switch attention from a distraction and get back on task is highly relevant to normal cognitive function, said study leader Florin Dolcos, a professor of psychology at Illinois who studies emotional regulation and cognition.

"Sometimes people with depression or anxiety are not able to switch away from emotional distractions and focus," he said. "Better imaging studies will make it easier to test individuals who have been trained in specific emotion regulation strategies to see if those strategies are working to improve their cognition. And now we can image this with precision in real time, at the mind's speed," he said.

The trimodal approach will provide better answers to other questions about how the brain operates, the researchers said.

"In previous work, these three technologies were applied on the same individuals at different times," Gratton said. "But we gain a lot from measuring these things together."

"This new approach could have a profound effect on neuroscience theory in general, on human neuroscience," Fabiani said. "Because now we don't have to guess about how these different signals align."