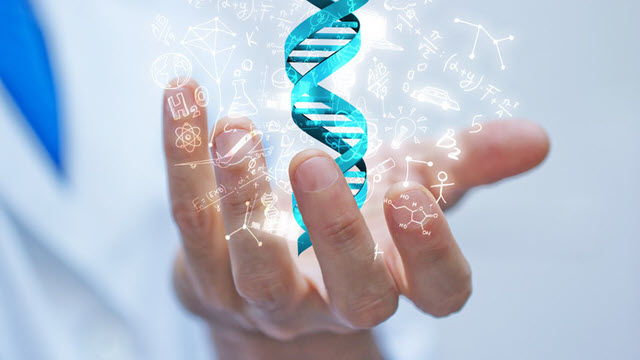 A Cornell researcher, who is a leader in developing a new type of gene editing CRISPR system, and colleagues have used the new method for the first time in human cells—a major advance in the field.

The new system, called CRISPR-Cas3, can efficiently erase long stretches of DNA from a targeted site in the human genome, a capability not easily attainable in more traditional CRISPR-Cas9 systems. Though robust applications may be well in the future, the new system has the potential to seek out and erase such ectopic viruses as herpes simplex, Epstein-Barr, and hepatitis B, each of which is a major threat to public health.

“My lab spent the past 10 years figuring out how CRISPR-Cas3 works. I am thrilled that my colleagues and I finally demonstrated its genome editing activity in human cells,” said Ailong Ke, professor of molecular biology and genetics and a corresponding author of a paper published April 8 in the journal Molecular Cell. “Our tools can be made to target these viruses very specifically and then erase them very efficiently. In theory, it could provide a cure for these viral diseases.”

The CRISPR-Cas3 technology also allows researchers to scan through the genome and detect non-coding genetic elements, which make up 98 percent of our genome but have not been well characterized. These elements act as regulators that control the expression of proteins in coding genes, and they’ve been found to be pivotal for cell differentiation and sex determination.

CRISPR-Cas3 could be used to efficiently screen for non-coding genetic elements and erase long sequences of DNA. Once erased, researchers may look to see what functions are missing in an organism, to determine the role of that genetic element.

Yan Zhang, assistant professor of biological chemistry at the University of Michigan, is also a corresponding author of the paper. First authors are Adam Dolan, a graduate student in Ke’s lab, and Zhonggang Hou, a research lab specialist in Zhang’s lab.

CRISPR-Cas9 systems use a bacterial RNA as a guide pairs with and recognizes a sequence of DNA. When a match is found, the guide RNA directs CRISPR-associated (Cas) proteins to that precise string of DNA. Once located, the Cas9 protein snips the target DNA at just the right place. CRISPR-Cas3 uses the same mechanism to locate a specific sequence of DNA, however, instead of snipping the DNA in half, its nuclease erases DNA continuously, for up to 100 kilobases.

For the first time, Ke, Zhang and colleagues successfully deleted sequences of up to 100 kilobases of targeted DNA in human embryonic stem cells and in another cell type called HAP1.

While CRISPR-Cas3 holds the potential for a more impactful genome-editing tool than CRISPR-Cas9, the researchers are working to control how long a section they delete. “We can’t quite define the deletion boundaries precisely, and that is a shortcoming when it comes to therapeutics,” Ke said.

A patent application has been filed for this genome editing tool through the Center for Technology Licensing.