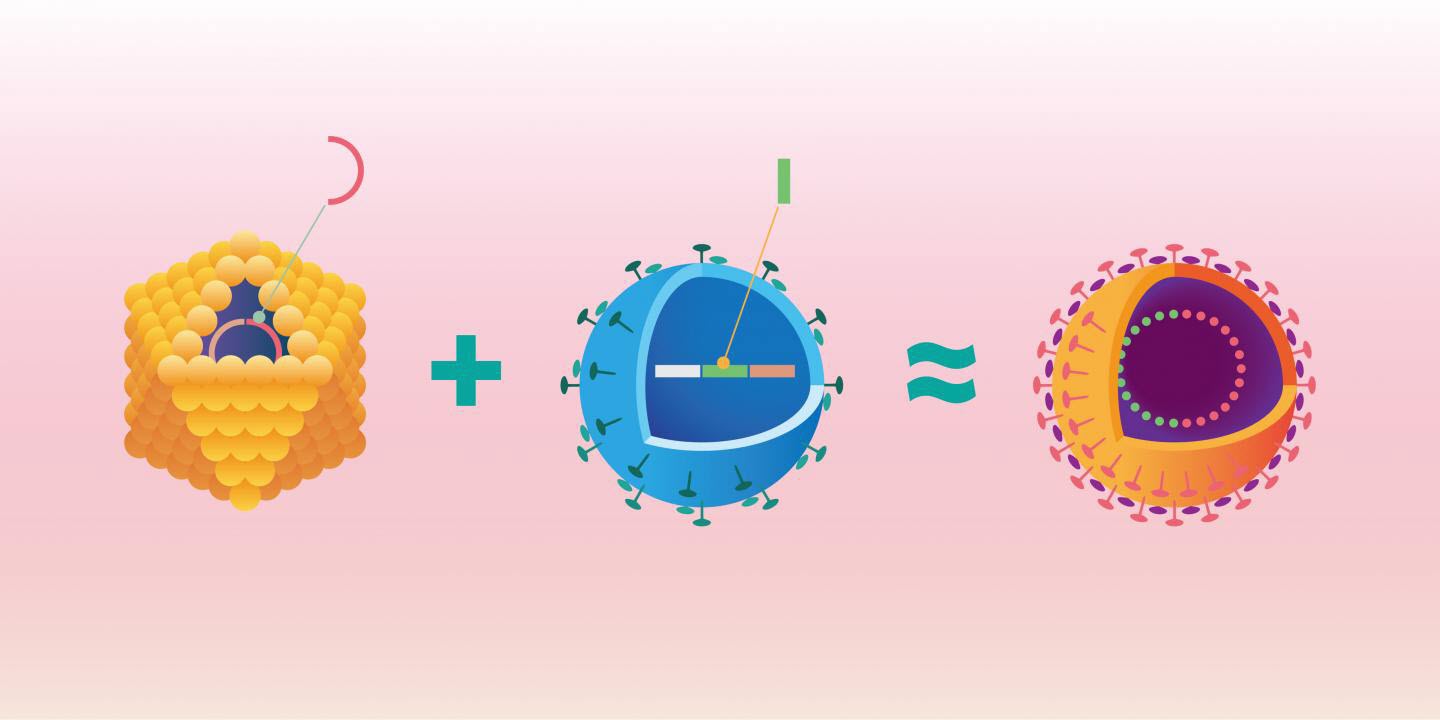 Cruciviruses are a hybrid form containing both RNA and DNA genomic material. Here, a single-stranded DNA virus (yellow) containing a Rep protein sequence, which directs the virus' replication, borrows genetic information from an RNA virus (blue), specifically, a coding sequence for the RNA virus's capsid protein. The result is a chimerical virus with both DNA and RNA components—a crucivirus (seen in the right panel).
Graphic by Shireen Dooling for the Bioodesign Institute

For millions of years, viruses have participated in a far-flung, import-export business, exchanging fragments of themselves with both viral and non-viral agents and acquiring new features. What these tiny entities lack in outward complexity, they make up for with their astonishing abilities to swap out modular genomic components and ceaselessly reinvent themselves.

In new research appearing in the journal mBio, Arvind Varsani and his colleagues investigate a recently discovered class of viruses that have taken the characteristic versatility of the viral world to new heights.

Referred to as cruciviruses, these minute forms reveal a fusion of components from both RNA and DNA viruses, proving that these previously distinct genomic domains can, under proper conditions, intermingle, producing a hybrid or chimeric viral variant.

Varsani, a virologist at the Arizona State Univeristy (ASU) Biodesign Center for Fundamental and Applied Microbiomics, is deeply intrigued with these new viruses, which are starting to crop up in greater abundance and diversity in a wide range of environments.

"It is great to see the research groups that first identified cruciviruses around the same time teaming up for the sharing and mining of metagenomic data with an aim to identify a larger diversity of cruciviruses," says Varsani, an associate professor with ASU School of Life Sciences.

Crucivirus sequences were identified by Varsani's colleague and co-author Kenneth M. Stedman and his group at Portland State University. The team detected the viruses flourishing in an extreme environment—Boiling Springs Lake (BSL) in Lassen Volcanic National Park, Northern California. Around the same time, Varsani and Mya Breitbart's research group identified a crucivirus in a dragonfly sample from Florida.

Arvind Varsani is a virologist with the Biodesign Center for Fundamental and Applied Microbiomics and ASU's School of Life Sciences.
The Biodesign Institute at Arizona State University

Since their discovery in 2012, cruciviruses have been found in diverse environments around the world, from lakes in upstate New York and Florida, to the Antarctic and deep-sea sediments. Some 80 distinct cruciviruses had been identified, prior to the current study, which expands the number to 461.

The first cruciviruses were identified using a technique known as viral metagenomics, in which viral genetic material obtained directly from the environment is sequenced rather than being cultivated or cultured from a host species or natural reservoir.

The results of these early investigations revealed peculiar genetic sequences, radically distinct from anything that had been seen before. This sequences clearly displayed the signature of a DNA virus, yet also contained a gene that appeared to be derived from an RNA virus.

Using a shotgun approach to trawl through a potentially vast sequence space, viral metagenomics enables researchers to identify all of the genomic patterns present in an environmental sample, then separate out distinct viral sequences, like a fisherman retrieving a variety of sea creatures from his net.

The technique has revolutionized the discipline of virology. In addition to identifying a galaxy of previously unknown viruses, metagenomics has offered up exciting clues about genetic diversity and is helping to unlock some of the secrets of viral evolution, all without the need to initially isolate viral species or cultivate viruses in the lab.

Cruciviruses belong to a broader class of viruses known as CRESS, (for circular Rep-encoding single-stranded) DNA viruses which have recently been classified into the phylum Cressdnaviricota. The defining characteristic of such viruses is their mode of replication, which relies on a specific component, known as the Rep protein. The Rep protein is important for guiding the replication method of these viruses, known as rolling circle DNA replication. Presence of the Rep protein and rolling circle replication pinpoints a virus as belonging to cressdnaviruses and helps researchers untangle the devilishly complex relationships and lineages found in the viral world.

In addition to the Rep found in cressdnaviruses, cruciviruses contain another centrally important feature—a capsid protein that is similar to that previously found only in RNA viruses. Capsids are vitally important, forming the outer shell or envelope that encloses the virus's identity—its genetic sequence. The capsid shelters the vital nucleic acids sequestered within from digestion by host cell enzymes, enables virus particles to attach themselves to host cells and allows viruses to evade host cell defenses. Finally, capsids contain specialized features that give the virus its ability to puncture the host cell membrane and inject viral nucleic acid into the cell's cytoplasm.

But how did a run-of-the-mill cressdnavirus come to acquire its RNA virus capsid protein coding sequence? This remains an issue of considerable debate, though presumably some form of lateral gene transfer occurred.

Viruses can acquire genes from their immediate progenitors, the way genetic traits are passed from human parents to their offspring. Viruses, however, are far more genetically promiscuous, collecting new genes from the cells they infect, from other unrelated viruses and even from bacterial symbionts. (The phenomenon is also common among bacteria, which can use horizontal gene transfer to acquire antibiotic resistance.)

Through some such mechanism, a cressdnavirus acquired an RNA virus capsid-like gene, creating the first crucivirus. It also appears that various cruciviruses have actively exchanged functional elements among themselves, further scrambling their evolutionary history.

While the how of crucivirus DNA-RNA recombination remains mysterious, the why may be more straightforward. Clearly, the ability to borrow genetic traits from such distantly related viral sources could provide single-stranded DNA viruses with a considerable adaptive edge.

In the current study, researchers explored a vast dataset including 461 cruciviruses and 10 capsid-encoding circular genetic elements identified from varied environments and organisms, making this the most expansive investigation of crucivirus sequences yet undertaken.

The samples were found in environments ranging from temperate lakes to permafrost and lurking within organisms including red algae and invertebrates. The study points to the stramenopiles/alveolates/Rhizaria or SAR supergroup, (a diverse assemblage of eukaryotes, including many photosynthetic organisms) as the plausible candidate hosts for these unusual viruses, though this has yet to be verified.

After examining the windfall of sequences, the researchers assembled similarity networks of cruciviral proteins with related viruses to try to better understand the twisting evolutionary paths that may have given rise to them, finding a rich cross-pollination of viral traits between many large families of viruses including Geminiviridae, Circoviridae, Nanoviridae, Alphasatellitidae, Genomoviridae, Bacilladnaviridae, Smacoviridae, and Redondoviridae.

The findings may provide new insights into the early transition from RNA as the primary hereditary molecule of life to the adoption of more complex DNA genomes that has come to dominate life in the cellular world. The existence and behavior of cruciviruses suggest that viruses may have played a crucial role in this all-important transition, acting as a kind of genomic bridge between the RNA and DNA worlds, during the earliest emergence of life, though much more work is needed to explore these possibilities.

Recombining in endless forms, viruses have become the planet's most ubiquitous biological entities, affecting every living organism and occupying every ecological niche. Increasingly, viruses are revealing themselves not only as agents of disease but as drivers of species evolution and vital actors in the molding of ecosystems.

The expanded abilities of cruciviruses to borrow genomic elements from the most far-flung regions of viral sequence space suggest that entirely new virus groups may arise though prolific recombination events between distantly related forms.