Extended space flights have shown that, on average, astronauts lose more than 1 percent of their bone mass while experiencing microgravity—a condition known as osteopenia. With NASA currently planning a three year-mission to send astronauts to Mars sometime in the 2030s, scientists are now looking at ways to prevent bone loss during extended space missions.

Presently, astronauts working on the International Space Station have a specific daily exercise regimen to stave off bone loss and are typically only on the station for less than six months. A trip to Mars however would take 10 months one way with astronauts staying in orbit for a year to collect data before making the return trip home to Earth. 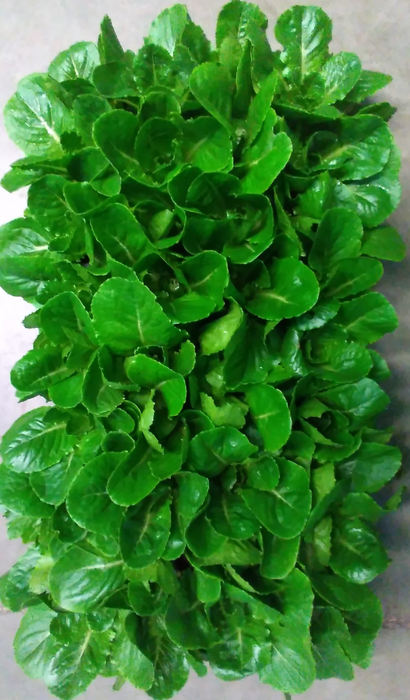 This lettuce produces a bone-stimulating hormone that could help stave off bone loss in space and on Earth.
Kevin Yates

Three years exposed to microgravity would leave astronauts quite vulnerable to osteopenia, and later, osteoporosis. While a medication is available that contains a fragment of human parathyroid hormone (PTH) and effectively stimulates bone growth, it requires daily injections. Further, transporting large quantities of the medication as well as syringes is simply not practical. So, a team of researchers at University of California, Davis, including graduate student Kevin Yates; Somen Nandi, PhD; and Karen McDonald, PhD developed a way for astronauts to produce it themselves by growing transgenic lettuce in space. This would also provide a source of fresh tasty greens—a change from their mostly canned and freeze-dried diets. If effective, the lettuce might also prevent osteoporosis in resource-poor areas of Earth, according to the researchers.

The researchers will be presenting their results at the annual spring meeting of the American Chemical Society (ACS).  ACS Spring 2022 is a hybrid meeting being held virtually and in-person March 20–24, with on-demand access available March 21–April 8.

“Astronauts can carry transgenic seeds, which are very tiny—you can have a few thousand seeds in a vial about the size of your thumb—and grow them just like regular lettuce,” Nandi says. “They could use the plants to synthesize pharmaceuticals, such as PTH, on an as-required basis and then eat the plants.”

Astronauts on the ISS have already shown that they can grow lettuce in the resource-limited environment. The transgenic lettuce developed by the team would express the PTH peptide in a form that could be taken orally, rather than via daily injection. To increase PTH’s stability and bioavailability in the body, they attached a piece of another protein, the fragment crystallizable (Fc) domain of a human antibody, to PTH’s sequence. Previous studies have shown that the Fc fragment increases the time that the attached peptide circulates in the blood, making it more effective.

Using Agrobacterium tumefaciens to introduce the PTH-Fc encoding gene to the lettuce, the team was able to produce plants able to express about 1–12 milligrams of the modified peptide hormone per kilogram of fresh lettuce. Presently, that would require astronauts to eat roughly 8 cups of lettuce daily to get a sufficient dose.

While that is admittedly a large salad, the researchers are looking to increase expression and bioavailability. “One thing we’re doing now is screening all of these transgenic lettuce lines to find the one with the highest PTH-Fc expression,” McDonald says. “We’ve just looked at a few of them so far, and we observed that the average was 10–12 mg/kg, but we think we might be able to increase that further. The higher we can boost the expression, the smaller the amount of lettuce that needs to be consumed.”

Before astronauts have too many space salads, the team still must optimize the PTH-Fc expression and test the lettuce for its ability to effective and safely prevent bone loss in both animal studies and clinical trials. Nevertheless, Yates predicts, “I would be very surprised that if, by the time we send astronauts to Mars, plants aren’t being used to produce pharmaceuticals and other beneficial compounds.”