It was a 3D puzzle with over 1000 pieces, with only a rather fuzzy outline as a guide. But scientists at EMBL have now put enough pieces in place to see the big picture. In a study published today in Science, they present their latest findings, bringing the nuclear pore complex into focus.

The nuclear pore is a passage into the cell's nucleus. A typical cell has hundreds of these pores, playing a crucial role in controlling the hundred of thousands of molecules that enter and exit this compartment every minute. Nuclear pores are used by many viruses to inject their genetic material into a host and they are known to change when cells become cancerous, so knowing how they work is important. Scientists understood many of the components of the nuclear pore, but exactly how those building blocks fitted together was unclear. 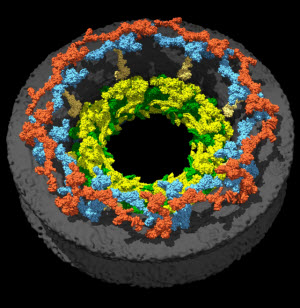 The outer ring is colored in orange and blue, whereas the newly characterized inner ring is seen in green and lemon.Image Courtesy of: Jan Kosinski/EMBL"The nuclear pore is the biggest, most complicated protein complex in a human cell. We now understand how it is structured," says Martin Beck, who led the work at EMBL. "This is a very important first step towards understanding what actually happens to nuclear pores in cancer, during ageing, and in other conditions."

The nuclear pore is composed of three layered rings: a nuclear ring facing the nucleus; a cytoplasmic ring facing the rest of the cell; and an inner ring in between those two. Having already pieced together how the building blocks of the nuclear and cytoplasmic rings are arranged, Martin Beck's group at EMBL have now worked out the arrangement of the pieces that form the inner ring.

"Surprisingly, we found that although it is made of different building blocks, the inner ring has the same basic architecture as the other two rings," says Shyamal Mosalaganti from EMBL, who studied the ring using cryo-electron microscopy. "This very complicated structure is built using simple principles . We were able to uncover that because we interweaved a lot of different techniques here."

Beck and colleagues would now like to understand how the cell completes this 3D puzzle: how the nuclear pore is assembled. Thanks to an ERC grant, the scientists are also exploring how the pore varies between different kinds of cells.

"Knowing this structure, we can now look at how nuclear pores evolved, right at the beginning of the development of complex cells," says Jan Kosinski from EMBL, who put the pieces together using computer modelling. "The moment you have a nucleus—a compartment which encloses DNA—you need a nuclear pore, but how it developed is still the subject of intense debate."

The work was carried out in collaboration with Ed Hurt's lab at the University of Heidelberg, Germany, and Joseph Glavy's lab at the Stevens Institute of Technology, USA.