What can the International Space Station teach us about mudslides here on Earth?

Here is the connection: University of California (UC), San Diego engineers are trying to better understand the role gravity plays in mudslides. That is why in 18 months, they will launch an experiment to the ISS via SpaceX and NASA to study mudslides in microgravity.

Back here on Earth, structural engineer Ingrid Tomac and her team at the Jacobs School of Engineering at UC San Diego will conduct under Earth's gravity the same experiments that are happening in space in microgravity.

"Gravity plays a big role in mudslides, but we do not understand it," said Tomac, who is a professor in UC San Diego's Department of Structural Engineering. "The idea is to test in space in microgravity so we can get a baseline."

Tomac's ultimate goal is to develop technologies to prevent mudslides. This is particularly important in places where wildfires burn away vegetation and roots, producing wax that coats soil to become water repellent. When the rainy season comes, water is unable to penetrate the soil. On steep slopes, rain splashes and blankets steep hills and detaches soil particles, which trap air bubbles. Dangerous mudslides follow.

"What happens in mudslides is a three-phase mixture of air, sand, and water," Tomac said. "We want to better understand how these three elements interact, both under gravity and in microgravity."

The UC San Diego team is partnering with Kentucky-based firm Space Tango. The company is getting $250,000 from NASA to turn the experiments here on earth into something that can be launched up to the ISS. It's all part of the CubeLabs project, a partnership between NASA and Space Tango to bring to the ISS compact experiments that can either run automatically or be remote-controlled.

In gravity, solids sink and bubbles rise. Tomac hopes that the experiments on the ISS will allow her to learn how water repellent particles and bubbles aggregate in water in microgravity. The proposed experiments will improve prevention methods and our understanding of mudslides. 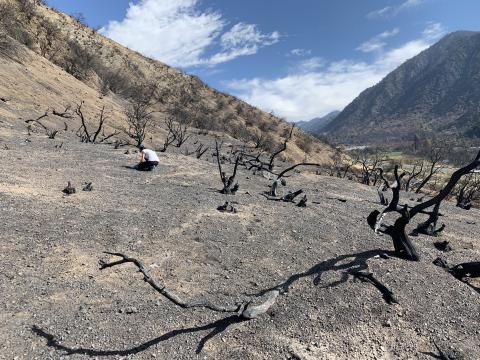 In addition to this work with the ISS, Tomac and her team have discovered that spraying Xanthan gum, a common food additive used as a thickener or stabilizer, on eroded slopes creates a protective layer. Xanthan acts like glue that keeps particles of sand on the surface of the slope. As a result, the soil particles remain in place, and clean rainwater just flows downhill. This is a much more manageable scenario than a mudslide.

Xanthan gum is essentially made of sugar and completely biodegradable. It is also inert and will not pollute water tables. After a year or two, it is eventually absorbed in the soil and doesn't interfere with vegetation growth, all of which will make the soil more stable.

"Spraying this on eroded sites would be a good temporary measure to protect the slopes," Tomac said. "It wouldn't have an impact on plants, as opposed to some of the chemicals currently used."

Tomac's team is also studying individual drops of water to see how they behave differently when they fall on regular and hydrophobic soil. They're also working toward a solution to allow sand to absorb water in deeper layers, preventing mudslides.

"We are looking at the smallest scale to better understand the mechanisms that lead to mudflows," Tomac said.

The work is funded by a $400,000 grant from the National Science Foundation, $78,000 from the UC Institute of Transportation Studies and part of Tomac's $50,000 Hellman Fellowship.

- This press release was originally published on the UC San Diego News Center. It has been edited for style