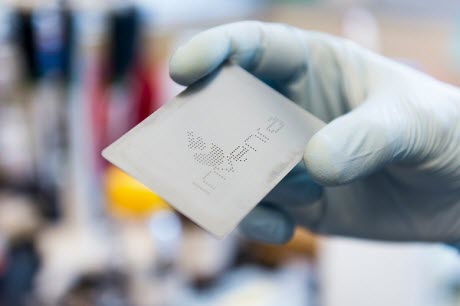 Antibodies are essential to many immune reactions, so antibody drugs often target autoimmune disease. One, called Humira from drugmaker AbbVie, sells more than $1 billion a month for treating conditions such as rheumatoid arthritis and Crohn's disease, says Invenra president Roland Green. "Antibodies are the fastest-growing segment of pharmaceuticals, based on what is in the pipeline. They have a higher success rate, and they don't have the side effects that conventional cancer drugs have."

Another antibody drug, Genentech's Herceptin, is one of the most effective treatments for some types of breast cancer.

Antibodies are made in the human body by a mix-and-match genetic toss-up, says Green. "There is essentially an infinite number of possible human antibodies, but we don't have a billion genes for antibodies — we have blocks of genetic code that can be scrambled. If you think of each antibody gene as a word, we have a bunch of words that we can rearrange into an almost infinite number of sentences."

The ability to mimic the natural mix-and-match process underlies antibody production. Invenra's advantage resides in what it skips: many of the time-consuming steps in conventional antibody production. Instead of growing the antibodies in cells, Invenra grows them directly from artificial genes, in a test tube that contains cellular machinery, but no cells.

Once made, the antibodies must be "screened" to see whether they lock onto a biological structure that plays a role in disease. 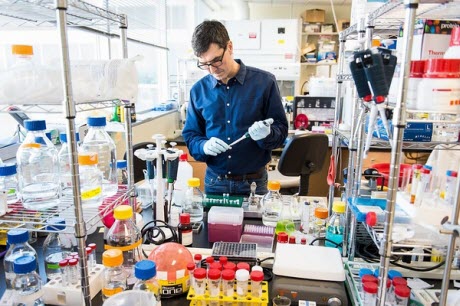 Roland Green, president of Invenra, works in the company’s research lab at the University of Wisconsin-Madison’s University Research Park.Photo credit: Jeff MillerMuch of Invenra's savings in time and cost originates in its microscopic operations. "We don't need much antibody for the screening," Green says, "and that allows us to make the antibody from a single molecule of DNA." That eliminates the laborious process of multiplying and purifying DNA before the antibodies can be synthesized from it.

By working with samples that are 1,000 times smaller than competing techniques, "the reagent cost is about one thousand times lower," Green says.

Green and Emile Nuwaysir, both graduates of UW-Madison's environmental toxicology program, are Invenra's co-founders. The pair were also the first two employees at NimbleGen, a Madison startup that was sold in 2007 to Roche for $272.5 million. NimbleGen's "gene chip" technology was built around Green's Ph.D. dissertation in Michael Sussman's lab at UW-Madison.

After a couple of years at Roche, Green decided he preferred working in a startup, so he and Nuwaysir started Invenra in Madison in 2011. Nuwaysir works elsewhere but is a director of Invenra, which employs 11 people.

Invenra is designed to be a fee-for-service antibody supply firm, responding to requests from pharmaceutical companies for antibodies that lock onto a specific target, such as one of the molecules that tumor cells use to evade immune attack.

Once it makes a "library" of antibodies, Invenra then tests whether they stick to the target. "We have a marker in the assay that will glow green if the antibody sticks," Green says. "If we find an antibody that might prevent the cancer from shutting down the immune system, we'll see a green light in the microscope."

From that point, the drug company will try to develop the antibody as a cancer treatment, Green says. "We are talking to a bunch of potential customers and hope to have contracts signed within a month or two."