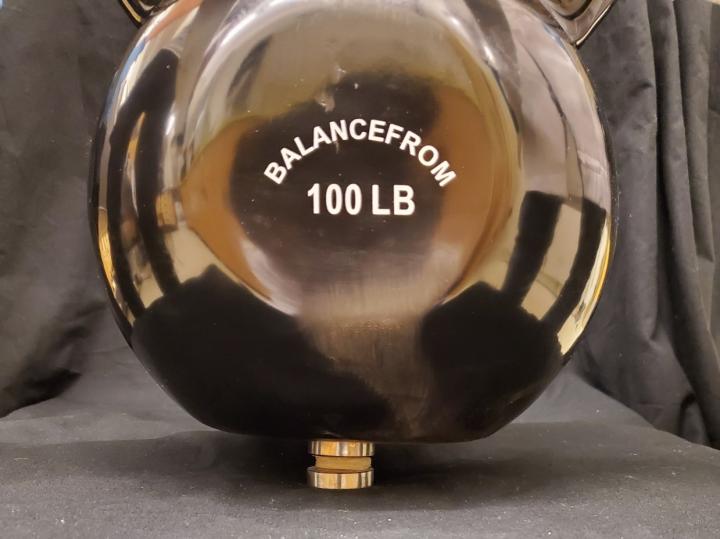 Duke researchers have developed the first gel-based synthetic cartilage with the strength of the real thing. A quarter-sized disc of the material can withstand the weight of a 100-pound kettlebell without tearing or losing its shape.
Feichen Yang, Duke University

DURHAM, NC — The thin, slippery layer of cartilage between the bones in the knee is magical stuff: strong enough to withstand a person's weight, but soft and supple enough to cushion the joint against impact, over decades of repeat use. That combination of soft-yet-strong has been hard to reproduce in the lab. But now, Duke University researchers say they've created an experimental gel that's the first to match the strength and durability of the real thing.

The material may look like a distant cousin of Jell-O—which it is—but it's incredibly strong. It's 60 percent water, but a single quarter-sized disc can bear the weight of a 100-pound kettlebell without tearing or losing its shape.

Its developers say it's the first hydrogel—materials made of water-absorbing polymers—capable of withstanding tugging and heavy loads as well as human cartilage, without wearing out over time.

Led by Duke chemistry and materials scientists Ben Wiley and Ken Gall, the research could one day offer people with knee troubles a replacement for damaged cartilage, and an alternative to the 600,000 knee replacement surgeries performed in the US each year.

A smooth rubbery tissue that covers the ends of bones and enables them to glide smoothly against each other, cartilage helps absorb a huge amount of force with every step—typically between two and three times your body weight.

However, cartilage also has limited ability to heal and repair itself. Once worn by age, overuse or trauma it's difficult to treat, said Gall, a professor of mechanical engineering and materials science at Duke.

For patients who want to avoid or postpone a knee replacement that may only last 20 years, artificial cartilage can help. Hydrogels have been explored for use as a cartilage substitute since the 1970s and are used in soft contact lenses and disposable diapers. Researchers are attracted to these materials because of their slippery, shock-absorbing properties and because they don't harm nearby cells. But until now they've proven too weak to be used in load-bearing joints like the knee.

The Duke team set out to change that. "We set out to make the first hydrogel that has the mechanical properties of cartilage," said Wiley, a chemistry professor at Duke.

The new hydrogel consists of two intertwined polymer networks: one made of stretchy spaghetti-like strands and the other more rigid and basketlike, with negative charges along their length. These are reinforced with a third ingredient, a meshwork of cellulose fibers.

When the gel is stretched, the cellulose fibers resist pulling and help hold the material together. And when it is squeezed, the negative charges along the rigid polymer chains repel each other and stick to water, helping it spring back to its original shape.

"Only this combination of all three components is both flexible and stiff and therefore strong," said co-author Feichen Yang, who earned a chemistry PhD in Wiley's lab.

When the researchers compared the resulting material to other hydrogels, theirs was the only one that was as strong as cartilage under both squishing and stretching.

In one experiment, the team subjected it to 100,000 cycles of repeat pulling, and the material held up just as well as porous titanium used for bone implants, "which exceeded our initial expectations," said co-author William Koshut, a PhD student in the Gall lab.

They also rubbed the new material against natural cartilage a million times. They found that its smooth, slippery self-lubricating surface is as wear-resistant as the real thing and four times more wear-resistant than synthetic cartilage implants currently FDA-approved for use in the big toe.

Moving the material from the lab to the clinic would take another three years at least, Wiley said. Initial safety tests suggest the material is nontoxic to lab-grown cells. The next step is to design an implant that they can test in sheep.

But the team says eventually the research could offer new options for people with knee pain, and get them back to doing the things they love without the long recovery times and limited lifetime associated with cartilage repair or knee replacement surgery.

- This press release was originally published on Duke Today