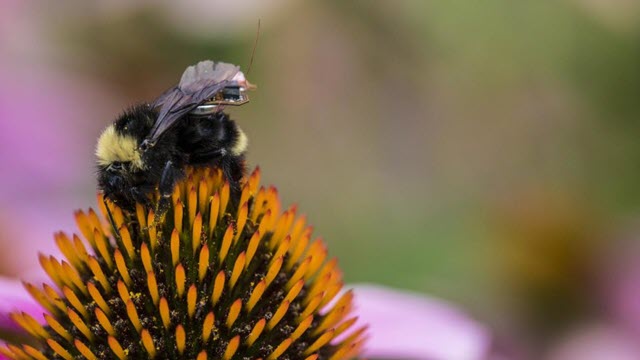 Farmers can already use drones to soar over huge fields and monitor temperature, humidity, or crop health. But these machines need so much power to fly that they can't get very far without needing a charge.

Now, engineers at the University of Washington have created a sensing system that is small enough to ride aboard a bumblebee. Because insects can fly on their own, the package requires only a tiny rechargeable battery that could last for seven hours of flight and then charge while the bees are in their hive at night. The research team presented its findings online Dec. 11 and in person at the ACM MobiCom 2019 conference.

"Drones can fly for maybe 10 or 20 minutes before they need to charge again, whereas our bees can collect data for hours," said senior author Shyam Gollakota, an associate professor in the UW's Paul G. Allen School of Computer Science & Engineering. "We showed for the first time that it's possible to actually do all this computation and sensing using insects in lieu of drones."

While using insects instead of drones solves the power problem, this technique has its own set of complications: First, insects can't carry much weight. And second, GPS receivers, which work well for helping drones report their positions, consume too much power for this application. To develop a sensor package that could fit on an insect and sense its location, the team had to address both issues.

"We decided to use bumblebees because they're large enough to carry a tiny battery that can power our system, and they return to a hive every night where we could wirelessly recharge the batteries," said co-author Vikram Iyer, a doctoral student in the UW Department of Electrical & Computer Engineering. "For this research we followed the best methods for care and handling of these creatures."

Previously other research groups have fitted bumblebees with simple "backpacks" by supergluing small trackers, like radio-frequency identification, or RFID, tags, to them to follow their movement. For these types of experiments, researchers put a bee in the freezer for a few minutes to slow it down before they glue on the backpack. When they're finished with the experiment, the team removes the backpack through a similar process.

These prior studies, however, only involved backpacks that simply tracked bees' locations over short distances—around 10 inches—and did not carry anything to survey the environment around the insects. Here, Gollakota, Iyer and their group designed a sensor backpack that rides on the bees' backs and weighs 102 milligrams, or about the weight of seven grains of uncooked rice.

"The rechargeable battery powering the backpack weighs about 70 milligrams, so we had a little over 30 milligrams left for everything else, like the sensors and the localization system to track the insect's position," said co-author Rajalakshmi Nandakumar, a doctoral student in the Allen School.

Because bees don't advertise where they are flying and because GPS receivers are too power-hungry to ride on a tiny insect, the team came up with a method that uses no power to localize the bees. The researchers set up multiple antennas that broadcasted signals from a base station across a specific area. A receiver in a bee's backpack uses the strength of the signal and the angle difference between the bee and the base station to triangulate the insect's position.

"To test the localization system, we did an experiment on a soccer field," said co-author Anran Wang, a doctoral student in the Allen School. "We set up our base station with four antennas on one side of the field, and then we had a bee with a backpack flying around in a jar that we moved away from the antennas. We were able to detect the bee's position as long as it was within 80 meters, about three-quarters the length of a football field, of the antennas."

Next the team added a series of small sensors—monitoring temperature, humidity and light intensity—to the backpack. That way, the bees could collect data and log that information along with their location, and eventually compile information about a whole farm.

"It would be interesting to see if the bees prefer one region of the farm and visit other areas less often," said co-author Sawyer Fuller, an assistant professor in the UW Department of Mechanical Engineering. "Alternatively, if you want to know what's happening in a particular area, you could also program the backpack to say: 'Hey bees, if you visit this location, take a temperature reading.'"

Then after the bees have finished their day of foraging, they return to their hive where the backpack can upload any data it collected via a method called backscatter, through which a device can share information by reflecting radio waves transmitted from a nearby antenna.

Right now the backpacks can only store about 30 kilobytes of data, so they are limited to carrying sensors that create small amounts of data. Also, the backpacks can upload data only when the bees return to the hive. The team would eventually like to develop backpacks with cameras that can livestream information about plant health back to farmers.

"Having insects carry these sensor systems could be beneficial for farms because bees can sense things that electronic objects, like drones, cannot," Gollakota said. "With a drone, you're just flying around randomly, while a bee is going to be drawn to specific things, like the plants it prefers to pollinate. And on top of learning about the environment, you can also learn a lot about how the bees behave." 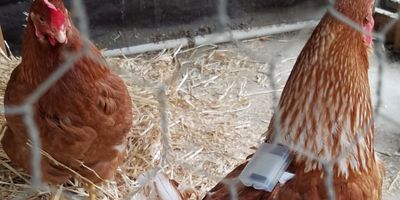 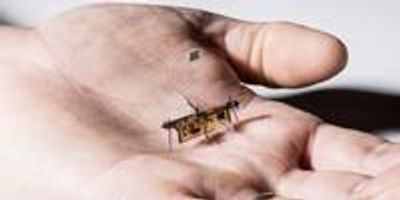