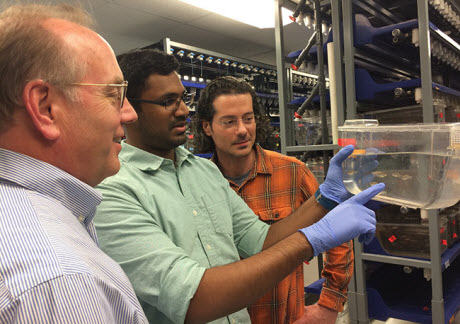 Vanderbilt biologists James Patton, left, Mahesh Rao, and Dominic Didiano in the zebrafish facility. Photo credit: The Patton Lab/VanderbiltIf you were a fish and your retina was damaged, it could repair itself and your vision would be restored in a few weeks.

Sadly, human eyes don’t have this beneficial ability. However, new research into retinal regeneration in zebrafish has identified a signal that appears to trigger the self-repair process. And, if confirmed by follow-up studies, the discovery raises the possibility that human retinas can also be induced to regenerate, naturally repairing damage caused by degenerative retinal diseases and injury, including age-related macular degeneration and retinitis pigmentosa.

The research was performed by a team of biologists at Vanderbilt University and is described in a paper titled “Neurotransmitter-Regulated Regeneration in the Zebrafish Retina” published online Mar. 9 by the journal Stem Cell Reports.

“The prevailing belief has been that the regeneration process in fish retinas is triggered by secreted growth factors, but our results indicate that the neurotransmitter GABA might initiate the process instead,” said James Patton, Stevenson Professor of Biological Sciences at Vanderbilt, who directed the study. “All the regeneration models assume that a retina must be seriously damaged before regeneration takes place, but our studies indicate that GABA can induce this process even in undamaged retinas.”

“This work opens new ideas for therapies for blinding diseases and has implications for the broader field of regenerative medicine,” said Tom Greenwell, program officer for retinal neuroscience at the National Eye Institute, which funded the study. 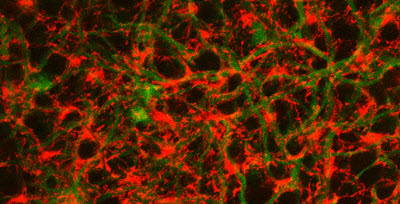 Image showing how two different types of nerve cells in the zebrafish retina overlap. Horizontal cells are shown in red, Muller glia are shown in green.Image credit: The Patton Lab/Vanderbilt UniversityIt turns out that the structure of the retinas of fish and mammals are basically the same. Although the retina is very thin—less than 0.5 millimeters thick—it contains three layers of nerve cells: photoreceptors that detect the light, horizontal cells that integrate the signals from the photoreceptors and ganglion cells that receive the visual information and route it to the brain.

In addition, the retina contains a special type of adult stem cell, called Müller glia, that span all three layers and provide mechanical support and electrical insulation. In fish retinas, they also play a key role in regeneration. When regeneration is triggered, the Müller glia dedifferentiate (regress from a specialized state to a simpler state), begin proliferating, and then differentiate into replacements for the damaged nerve cells. Müller glia are also present in mammalian retinas, but don’t regenerate.

Graduate student Mahesh Rao got the idea that GABA—normally a fast-acting neurotransmitter best known for its role of calming nervous activity by inhibiting nerve transmission in the brain—might be the trigger for retinal regeneration. He was inspired by the results of a study in the mouse hippocampus which found that GABA was controlling stem cell activity. 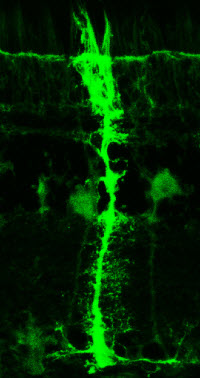 An image of a Muller Glia cell in the zebrafish retina. Muller Glia cells span the entire retina, providing mechanical support and electrical insulation. In fish retinas, they also play a key role in regeneration.Image credit: The Patton Lab/VanderbiltSo, working with Patton and research assistant professor Dominic Didiano, Rao designed a series of experiments with zebrafish—an important animal model for studying regeneration—which determined that high concentrations of GABA in the retina keep the Müller glia quiescent and that they begin dedifferentiating and proliferating when GABA concentrations drop.

“Last month a paper was published in the journal Cell that reports GABA levels play a central role in the regeneration of pancreas cells,” said Patton. “We now have three instances where GABA is involved in regeneration—the hippocampus, the pancreas and the retina—so this could be an important, previously unknown role for the neurotransmitter.”

They tested their hypothesis in two ways: By blinding zebrafish and injecting them with drugs that stimulate GABA production and by injecting normal zebrafish with an enzyme that lowers the GABA levels in their eyes.

Zebrafish are easily blinded. If they are in total darkness for several days and then exposed to very bright light, all the photoreceptors in their retinas are destroyed. Due to their robust regenerative ability, however, their eyes recover in just 28 days. When the biologists injected drugs that kept GABA concentrations in the retinas of newly blinded fish at a high level, they found that it suppressed the regeneration process.

On the other hand, when they injected an enzyme that lowers GABA levels in the eyes of normal fish, they found that the Müller glia began dedifferentiating and proliferating, the first stage in the regeneration process.

“Our theory is that a drop in GABA concentration is the trigger for regeneration. It initiates a cascade of events that includes the activation of the Müller glia and the production of various growth factors that stimulate cell growth and proliferation,” said Patton. “If we are correct, then it might be possible to stimulate human retinas to repair themselves by treating them with a GABA inhibitor.”

The researchers’ next step is to determine if GABA not only stimulates Müller glia dedifferentiation and proliferation, but also causes the differentiation that produces new photoreceptors and the other specialized neurons in the retina. They are pursuing this in both zebrafish and mice with a grant from the National Eye Institute’s Audacious Goals Initiative.