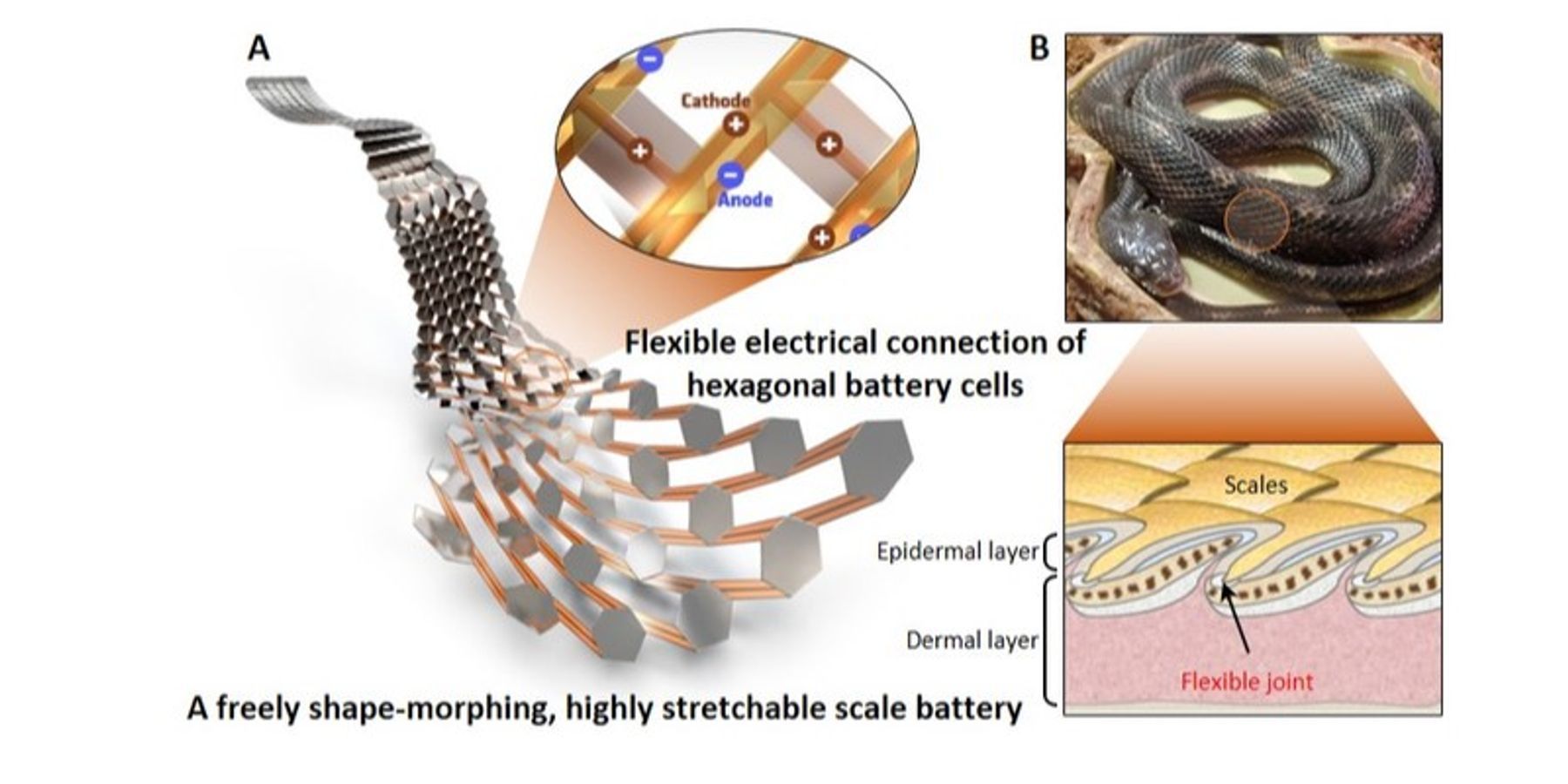 The KIMM research team led by Dr. Bongkyun Jang and Dr. Seungmin Hyun at the Department of Nano-Mechanics has developed a battery with high safety and stretchability by mimicking the design of the scales and flexible joints found in the structure of snake scales. Upon zooming in on the battery, one can see that it consists of a hexagonal battery and flexible electrical interconnections. The stretchable structure is realized by the flexible interconnections that can freely fold and unfold.
Korea Institute of Machinery and Materials (KIMM)

The Korea Institute of Machinery and Materials (KIMM), an institute under the jurisdiction of the Ministry of Science and ICT, has developed a flexible, stretchable battery that bends and stretches like a snake. This new battery is expected to have a wide range of uses, such as in energy storage technology and disaster situations, by applying it to various types of devices, from soft robots to wearable devices.

The KIMM research team, led by senior researcher Dr. Bongkyun Jang and principal researcher Dr. Seungmin Hyun at the Department of Nano-Mechanics, developed a stretchable battery structure whose safety and stretchability are based on the structure of snake scales. The team’s findings were published online in Soft Robotics, a prestigious journal in the field of soft robotics.

As was described with the boa constrictor that swallowed the elephant in the novella The Little Prince, a snake’s individual scales, while rigid, can fold together to protect against external impact. They also possess structural characteristics that allow them to be highly stretchable and move flexibly.

The KIMM research team developed the highly stretchable battery with an excellent stability and performance by fabricating the mechanical meta structure mimicking a snake’s scale. Unlike conventional wearable devices, in which the device’s frame and the battery are combined in a tight formation, this new technology enables flexible movement by connecting several small, hard batteries in a scale-like structure.

To ensure the battery’s safety, the research team also minimized deformation of the materials composing the battery by optimal design of the scale-like structure. Also, the shape of each battery cell was optimized to achieve high capacity per unit size.

Designing the shape of the battery cell and the connective components were the key aspects of this technological achievement. Small, hexagonal battery cells, resembling a snake scale were connected with polymer and copper material that use a hinge mechanism to fold and unfold. This design also facilitates economical mass-production because the battery can be made by cutting and folding flexible electrodes with a manufacturing process inspired by the art of origami.

This new technology can be implemented in energy storage devices found in wearable soft robots for humans, which require soft and flexible energy storage devices, or for those found in rehabilitation medical devices for the elderly and the sick who need physical assistance. In addition, these batteries are expected to be useful as power supply devices for soft robots that are used on site during disasters to help conduct rescue missions. Thanks to their ability to move flexibly and freely change shape, robots equipped with these batteries can be used to access narrow spaces blocked off by obstacles during such disaster situations.

Jang stated that, by applying the structure and design of snake scales, the KIMM research team developed a battery that is not only safe to use, but also retains its flexibility and stretchability. He also added that, down the road, he and his team aim to continue conducting follow-up research and development, so that this technology can be used for rehabilitation medical care and disaster relief and help ensure the health and safety of the general public.