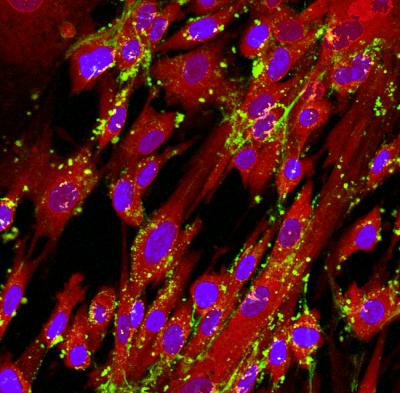 Immunohistochemical imaging of female human amniotic stem cells incubated with nanoparticles demonstrated a significant increase in uptake compared to male cells. (Green: quantum dots representing nanoparticles; red: cell staining; blue: nuclei)Image Source: Morteza Mahmoudi, Brigham and Women's HospitalImportant biological differences between men and women exist—right down to the cellular level. Investigators from Brigham and Women's Hospital and colleagues at Stanford University, McGill University, and University of California, Berkeley wanted to determine if differences between male versus female cells may influence how well cells uptake nanoparticles—a key vehicle for imaging and targeted drug delivery applications. The team demonstrated that cell sex considerably influenced cellular uptake of nanoparticles and found that cells from men and women responded differently to reprogramming techniques used to enhance the ability of the cells to differentiate into a greater variety of cell types. Their results, published in ACS Nano, may help researchers more safely and effectively produce nanomedicines that take sex into account.

"Despite huge efforts in the field of nanomedicine, fewer nanoparticle technologies than expected have made it to clinical trials. The reason behind this wide gap between the efforts and successful clinical translation is, at least in part, because of the existence of several overlooked factors at the nanobio interface." said co-corresponding author Morteza Mahmoudi, PhD, an instructor in the Center for Nanomedicine and Department of Anesthesiology at BWH. "Over the past ten years, the central goal of my research has been focused on finding and introducing overlooked factors at the nanobio interfaces to minimize this bench-to-clinic gap, which might pave a way to accelerate successful clinical translation of nanoparticles. Different responses of male and female cells to the exact same type and concentration of nanoparticles is the latest overlooked factor we have found."

Mahmoudi and his colleagues previously identified several others overlooked biological factors that appear to contribute to discrepancies seen between results in the lab and in the clinic, including importance of personalized medicine at the nanobio interfaces, cell type, cell shape, and incubating temperature. To understand if cell sex might be an additional important factor influencing outcomes, the team incubated nanoparticles with human amniotic stem cells (hAMSCs) which were extracted from the amniotic layer of placenta attached to male and female fetuses. They found that female cells had significantly higher uptake of nanoparticles than male cells.

"These differences could have a critical impact on the administration of nanoparticles," said Mahmoudi. "If nanoparticles are carrying a drug to deliver, different uptake could mean different therapeutic efficacy and other important differences, such as safety, in clinical data."

hAMSCs can be coaxed into an even more robust stem-cell state using a Sendai virus to deliver key factors to the nucleus. This reprogramming technique is quite common in stem cell biology—but the research team found that even this approach is affected by differences between male and female cells, with female cells responding at a nine-fold higher rate than male cells.

The team also tested nanoparticle absorption for other kinds of human cells, including fibroblasts from donors of older ages and found significant differences. Interestingly, the team found that male fibroblast cells had higher levels of uptake than female fibroblast cells. They also saw differences in the shape of the cells' mitochondria and endoplasmic reticulum structure among other differences.

"What we're seeing is that cell type is also going to be critical. If we're trying to deliver a chemotherapeutic drug, the cell type we are targeting as well as the sex of the patient may influence how well the drug is delivered and absorbed," said Mahmoudi. "Further research are required on a greater variety of cell types and their intracellular differences to achieve more in-depth information on the physicochemical and mechanical differences between male versus female cells. We hope that our work helps the nanobio field understand and overcome some of the key challenges in drug delivery, ultimately providing better therapies for patients in a safer and highly effective sex-specific manner."

BWH has a long-standing history and commitment to understanding how health and disease differ by sex. In particular, researchers in the Connors Center for Women's Health and Gender Biology are developing sex-specific treatment and prevention strategies in clinical medicine for the advancement of health care at BWH.

"It is essential for us to acknowledge and better understand how the molecular and cellular differences in males and females underlie so many aspects of human health," said Hadine Joffe, MD, MSc, Executive Director of the Mary Horrigan Connors Center for Women's Health & Gender Biology. "Through this study, Morteza Mahmoudi and his colleagues are helping to shed light on this underappreciated phenomenon, and their work extends the Brigham's commitment to applying discoveries about sex-based differences to improve health care."