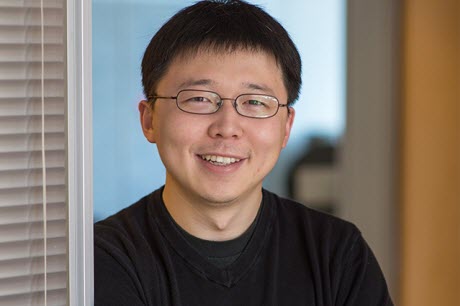 2017 $500,000 Lemelson-MIT Prize winner Feng Zhang.Photo credit: Justin Knight/McGovern InstituteCAMBRIDGE, Mass. (September 19, 2017) – Dr. Feng Zhang, a pioneer of the revolutionary CRISPR gene editing technology, TAL effectors, and optogenics, has just been announced as the recipient of the 2017 $500,000 Lemelson-MIT Prize, the largest cash prize for invention in the United States. Zhang is a core member of the Broad Institute of MIT and Harvard, an investigator at the McGovern Institute for Brain Research, James and Patricia Poitras Professor in Neuroscience at MIT, and associate professor in the departments of Brain and Cognitive Sciences and Biological Engineering at MIT.

Zhang and his team were first to develop and demonstrate successful methods for using an engineered CRISPR-Cas9 system to edit genomes in living mouse and human cells and have turned CRISPR technology into a practical and shareable collection of tools for robust gene editing and epigenomic manipulation. CRISPR, or Clustered Regularly Interspaced Short Palindromic Repeats, has been harnessed by Zhang and his team as a groundbreaking gene-editing tool that is simple and versatile to use. A key tenet of Zhang’s is to encourage further development and research through open sharing of tools and scientific collaboration. Zhang believes that wide use of CRISPR-based tools will further our understanding of biology, allowing scientists to identify genetic differences that contribute to diseases and, eventually, provide the basis for new therapeutic techniques.

Zhang’s lab has trained thousands of researchers to use CRISPR technology and since 2013 he has shared over 40,000 plasmid samples with labs around the world both directly and through the nonprofit Addgene, enabling wide use of his CRISPR tools in their research.

Zhang began working in a gene therapy laboratory at the age of 16 and has played key roles in the development of multiple technologies. Prior to harnessing CRISPR-Cas9, Zhang engineered microbial TAL effectors (TALEs) for use in mammalian cells, working with colleagues at Harvard, authoring multiple publications on the subject and becoming a co-inventor on several patents on TALE-based technologies. Zhang was also a key member of the team at Stanford that harnessed microbial opsins for developing optogenetics, which uses light signals and light-sensitive proteins to monitor and control activity in brain cells. This technology can help scientists understand how cells in the brain affect mental and neurological illnesses. Zhang has co-authored multiple publications on optogenetics and is a co-inventor on several patents related to this technology.

“Feng’s creativity and dedication to problem-solving impressed us,” said Stephanie Couch, executive director of the Lemelson-MIT Program. “Beyond the breadth of his own accomplishments, Feng and his lab have also helped thousands of scientists across the world access the new technology to advance their own scientific discoveries.”

“It is a tremendous honor to receive the Lemelson-MIT Prize and to join the company of so many incredibly impactful inventors who have won this prize in years past.” said Feng Zhang. “Invention has always been a part of my life—I think about new problems every day and work to solve them creatively. This prize is a testament to the passionate work of my team and the support of my family, teachers, colleagues, and counterparts around the world.”

The $500,000 prize, which bears no restrictions in how it can be used, is made possible through the support of The Lemelson Foundation, the world’s leading funder of invention in service of social and economic change.

“We are thrilled to honor Dr. Zhang, who we commend for his advancements in genetics, and more importantly, his willingness to share his discoveries to advance the work of others around the world,” said Dorothy Lemelson, chair of The Lemelson Foundation. “Zhang’s work is inspiring a new generation of inventors to tackle the biggest problems of our time.”

Zhang will speak at EmTech MIT, the annual conference on emerging technologies hosted by MIT Technology Review at the MIT Media Lab on Tuesday, November 7, 2017.

ABOUT THE LEMELSON-MIT PROGRAM

Jerome H. Lemelson, one of U.S. history’s most prolific inventors, and his wife Dorothy founded the Lemelson-MIT Program at the Massachusetts Institute of Technology in 1994. It is funded by The Lemelson Foundation and administered by the School of Engineering at MIT, an institution with a strong ongoing commitment to creating meaningful opportunities for K-12 STEM education. For more information, visit Lemelson.MIT.edu.

ABOUT THE LEMELSON FOUNDATION

Based in Portland, Oregon, The Lemelson Foundation uses the power of invention to improve lives. Inspired by the belief that invention can solve many of the biggest economic and social challenges of our time, the Foundation helps the next generation of inventors and invention-based businesses to flourish. The Lemelson Foundation was established in the early 1990s by prolific inventor Jerome Lemelson and his wife Dorothy. To date the Foundation has made grants totaling more than $200 million in support of its mission. For more information, visit http://www.lemelson.org.

How Barnacles Could Help Find Missing Persons Lost at Sea

How Barnacles Could Help Find Missing Persons Lost at Sea