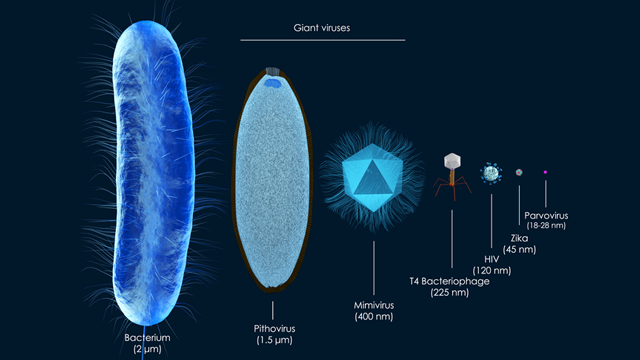 We all know viruses cause colds and flu this time of year, but you might be surprised to learn that a virus may have played a key role in the evolution of nearly all life forms on Earth.

In a new study, a University of Iowa biologist identified a virus family whose set of genes is similar to that of eukaryotes, an organism classification that includes all plants and animals.

The finding is important because it helps clarify how eukaryotes evolved after branching from prokaryotes some 2 billion years ago.

“It’s exciting and significant to find a living family of giant viruses with eukaryote-specific genes in a form that predates the latest common ancestor of all eukaryotes,” says Albert Erives, associate professor in the Department of Biology. “These viruses are like time machines that tell us more about how life on our planet came to be.”

In the study, Erives analyzed the genome of a virus family called Marseilleviridae and found it shares a similar set of genes, called core histones, with eukaryotes.

That places Marseilleviridae, and perhaps its viral relatives, somewhere along eukaryotes’ evolutionary journey.

“We now know that eukaryotes are more closely related to viruses,” says Erives, “and the reason is because they share core histones, which are fundamental to eukaryotes.”

Core histones are packagers, like professional gift-wrappers. They’re proteins that, in humans, coil DNA in the chromosomes so vital genetic information is compact and protected. Prokaryotes don’t have core histones, so somehow, somewhere, eukaryotes picked them up.

Viruses like Marseilleviridae may have been the source. (An alternative and equally fascinating explanation is that an ancestor of the Marseilleviridae picked up this gene from a proto-eukaryotic organism, an intermediate between prokaryotes and eukaryotes.)

Erives discovered this possible origin somewhat fortuitously. For a class assignment, he asked students to investigate giant viruses. These super-sized viruses, first discovered in 2003 although believed to be in existence for billions of years, are the giants of the virus world: They’re hundreds of times bigger and stocked with hundreds more genes than standard viruses. The one family of giant viruses not chosen by a student was Marseilleviridae, so Erives decided to take a look at it himself.

“So, when I saw this, it was wild,” Erives says. “No one has ever seen a virus with histones.”

Moreover, he realized Marseilleviridae “did not get these genes from any one eukaryotic lineage living, but rather from some ancestor who was proto-eukaryotic—that is, on its way to becoming a eukaryote. Until now, no ‘organism’ was known to have core histone genes besides eukaryotic cells,” he says.

The discovery begs a larger question about the role giant viruses have played in the evolution of all life on Earth. Erives likens giant viruses to vines spreading out into the cellular tree of life—sampling here, borrowing there, and sharing genetic material among the branches of archaea, bacteria, and eukaryotes.

“Giant viruses have genes that no one has seen before,” he says. “They’re conserved. They’ve been using them for something, and for a very long time. Why not use them now to peer into the past?”

Erives is the sole author of the paper, published in the journal Epigenetics & Chromatin. The paper is titled, “Phylogenetic analysis of the core histone doublet and DNA topo II genes of Marseilleviridae: Evidence of proto-eukaryotic provenance.”