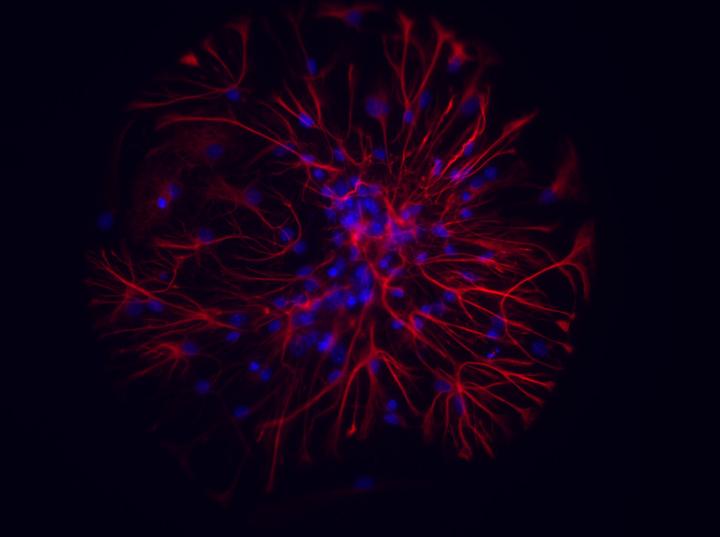 LECCE, ITALY — Gold nanoparticles have been developed in the laboratory in order to reduce the cell death of neurons exposed to overexcitement. The study is the result of an international collaboration coordinated by Roberto Fiammengo, researcher at the Center of Biomolecular Nanotechnologies of the IIT-Istituto Italiano di Tecnologia (Italian Institute of Technology) in Lecce (Italy). The international team also involves colleagues at the University of Genoa, Imperial College London, King's College London, the Center for Synaptic Neuroscience and Technology of the Istituto Italiano di Tecnologia in Genoa, and the Max Planck Institute for Medical Research in Heidelberg.

Excessive stimulation of neurons by the neurotransmitter glutamate, which is usually involved in the excitatory communication among neurons, can damage nerve cells and cause their degeneration. This phenomenon, known with the term excitotoxicity, is common in many neuroinflammatory and neurodegenerative diseases, such as Alzheimer's and Huntington's disease, but also in case of epilepsy, brain trauma, and stroke.

In particular, these nanoparticles were designed and prepared by the IIT team in Lecce, and are functionalized with peptides that allow selective inhibition of extrasynaptic glutamate receptors involved in the excitotoxicity. In fact, the size of the nanoparticles is 20-50 times larger than that of classic drugs resulting in the blockade of only the receptors located outside the synapses. In this way, correct neurotransmission is preserved while the excessive activation that leads to cell death is avoided.

The molecular mechanism underlying the neuroprotective effect of the nanoparticles has been clarified by the experimental work carried out by Pierluigi Valente at the University of Genoa, in collaboration with Fabio Benfenati's group of the Center for Synaptic Neuroscience and Technology of the IIT in Genoa (Italy).

The results of this research sets the basis for treatment of neurological diseases in which the excessive release of glutamate is at the basis of the pathology. The possibility of specifically blocking extrasynaptic receptors, mainly responsible for cell death, without interfering with synaptic transmission, opens up promising perspectives for targeted therapy without major side effects.

"We have developed nanoparticles with unique and necessary properties to answer to the indications of neurobiologists and physiologists," Fiammengo declares. "Coordinating such a multidisciplinary group of researchers was an extremely stimulating task and the results obtained show that this is the winning approach."

"Even if, at the moment, the nanoparticles developed cannot be used in therapy, this study shows how nanotechnology can provide important indications for treatment of many neuroinflammatory and neurodegenerative diseases," concludes the paper's first author Pierluigi Valente of the University of Genoa.