There may soon be a new way to make molecules to form the basis of pharmaceuticals, fuels, materials, agrochemicals, and an array of other products in our modern life. Chemists at the Department of Energy’s Lawrence Berkeley National Laboratory (Berkeley Lab) have successfully married chemistry and biology to create reactions never before possible. 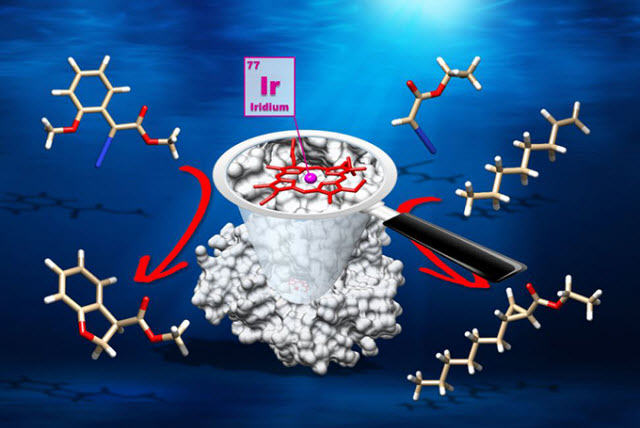 Graphic of artificial metalloenzyme. Within the protein (grey) is a porphyrin (red), a component of natural heme proteins, with iridium as the active site (purple). The enzyme converts the molecules at the top to those at the bottom by reaction at a carbon-hydrogen bond (left) and carbon-carbon double bond (right), respectively.Image Credit: John Hartwig Group/Berkeley Lab and UC Berkeley

They did this by replacing the iron normally found in the muscle protein myoglobin with iridium, a noble metal not known to be used by living systems. They then tested the iridium-enhanced myoglobin and found that it led to a new type of chemical reaction for this protein, the conversion of a carbon-hydrogen bond to a carbon-carbon single bond. The bionic enzyme, an artificial metalloenzyme, was thus capable of catalyzing a reaction for which there is no known natural or engineered enzyme.

This work, led by John Hartwig, a senior faculty scientist in Berkeley Lab’s Chemical Sciences Division, is described in a study published online this week in the journal Nature.

“We have blended two different types of catalysts in a way that has not been done before,” said Hartwig, who is also a UC Berkeley professor of chemistry. “By doing so, we are opening the door to the conversion of complex structures in biomass to single products; of natural gas to higher value materials; and molecules for drugs to treat human disease. Because the scope of catalysis in the chemical industry is so broad, this discovery could have an impact on almost every aspect of our lives.”

Getting the best of both worlds

Enzymes, or biological catalysts, are proteins that speed up chemical reactions in living organisms. Biological catalysts are prepared from renewable materials, operate near room temperature and atmospheric pressure, in water at neutral pH, and can be evolved in the laboratory using the modern methods of molecular biology to be more active, more selective, or longer-lived.

Related Article: Too Much Sugar? There's an Enzyme for That

Because enzymes are highly specific, more direct synthetic routes to desired molecules can be conceived, and as a result, less waste is produced in the course of producing those molecules. In the biosynthetic pathway to the creation of cholesterol, for instance, there are more than 50 different chemical bonds present—many of them almost identical to each other—and an enzyme would cause a reaction to occur at just one of those bonds.

“Many enzymes contain metals, but that metal is usually iron or copper, and the set of reactions catalyzed by iron or copper is much smaller than the set of reactions catalyzed by the precious metals,” said Hartwig. “Enzymes catalyze reactions necessary for life, not the reactions needed to create the everyday objects around us. We found a way to replace the iron in the protein myoglobin with a precious metal which resulted in an artificial enzyme that has the diverse reactivity of the precious metal combined with the high selectivity and capability to function under mild conditions found in an enzyme.”

Hartwig worked with Doug Clark, faculty scientist at Berkeley Lab; Hanna Key, a UC Berkeley graduate student in chemistry; and Pawel Dydio, a postdoctoral fellow at Berkeley Lab and UC Berkeley. Key and Dydio are co-lead authors of the study.

The researchers started by manipulating E. coli bacteria to create myoglobin that lacked iron. They then incorporated iridium into the muscle protein at the site where iron would normally be. Experiments showed that iridium could be bound at the site typically occupied by iron so that myoglobin could function as a new enzyme.

“Perhaps most important, this new artificial enzyme can be evolved in the laboratory to selectively form one product over another,” said Hartwig. “We want to take the catalysts that chemists have created and combine them with naturally occurring enzymes. We can use that structure to control the selectivity of the products created.”

“This is the first proof of principle of a new strategy to catalysis,” said Hartwig. “We’ve synthetically changed a protein to give it the functionality of a chemical catalyst while keeping in enough of the biology to allow us to use methods of molecular biology to evolve new functions. The long-term potential of this approach seems limitless.”