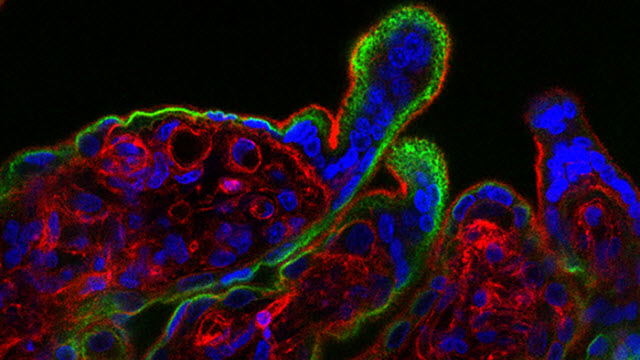 A powerful antiviral protein may act as a checkpoint for keeping or ending a pregnancy.

When exposed to Zika virus before birth, mouse fetuses with the protein commit cell suicide, while fetuses without it continued to develop. The findings, published January 5, 2018 in Science Immunology, suggests that the protein, a receptor involved in immune cell signaling, plays a role in spontaneous abortions and other human pregnancy complications.

The work could have implications for pregnant women infected with Zika or women with autoimmune disorders who are trying to have a baby, says study author Akiko Iwasaki, a Howard Hughes Medical Institute (HHMI) investigator and immunologist at Yale University.

“Pregnancy is a huge investment for a mother,” she says. “Our work shows how this signaling pathway works to terminate pregnancies that are not going to be viable early on.”

Zika virus is carried and transmitted by the Aedes aegypti mosquito and can also be spread during sex. Scientists have linked infections during pregnancy to stillbirths and birth defects such as microcephaly, where a baby’s head is abnormally small. Iwasaki and other researchers have been studying how signaling proteins called interferons defend the body against the virus.

“Interferons are one of the most potent antiviral factors the body generates,” Iwasaki says. When the body detects a virus, cells release interferons, which mount a rapid immune defense. Past studies have shown that adult mice lacking the receptor that binds two types of interferons, interferon-α and interferon-β, are highly susceptible to Zika. But the receptor’s effect on infected fetuses was unknown.

In the new work, Iwasaki and colleagues mated female mice lacking the receptor with males that had one copy of the gene that codes for the receptor protein. Pregnant mice were then infected with Zika. Each female carried a mixture of fetuses that either lacked or had the receptor. Fetuses without the receptor had higher virus levels than those with the receptor. That makes sense, Iwasaki says, because if the receptor is missing, there’s no antiviral effect. “The virus can replicate without any control,” she says.

But having the receptor didn’t guarantee good health. Fetuses with the receptor were aborted early in pregnancy, the team found. A slew of structural and molecular changes may have led to these fetuses’ demise. Placentas had underdeveloped blood vessels, the barrier between mother and fetal cells was abnormal, and researchers spotted evidence of cellular stress.

Iwasaki explains that the interferon receptor acts as a checkpoint during pregnancy. If the receptor detects interferons, it can signal molecules that kill the fetus in response. The results suggest that the host’s response to the virus is actually what terminates the pregnancy—not the virus itself. 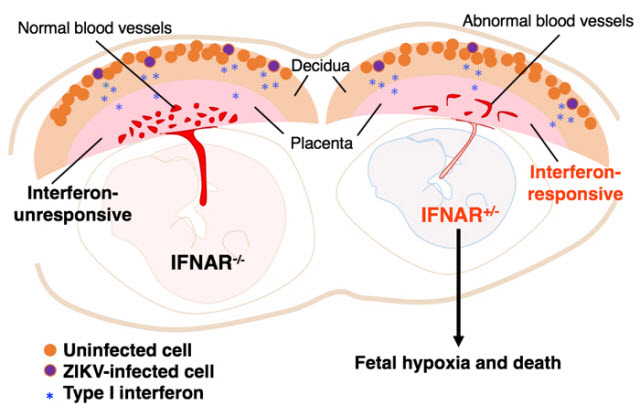 In a thick membrane that lines the uterus during pregnancy, cells infected with Zika (purple circles) secrete type I interferons (blue stars). Mouse fetuses that lack protein receptors that bind interferons continue to develop (IFNAR-/- fetus, left). In contrast, mouse fetuses with the receptors are disturbed by type I interferons, which disrupt the development of the placenta and lead to abnormal blood vessel growth, hypoxia, and fetal death (IFNAR +/-, right).Image Credit: Akiko Iwasaki & Laura Yockey/Yale/HHMI

The team cannot yet say if similar signaling happens in human fetuses infected with Zika. But the researchers wanted to see how interferons might affect human pregnancies. In collaboration with Carolyn Coyne’s group at the University of Pittsburgh, Iwasaki’s team tested the impact of interferons on human placenta. When exposed to interferon-β, which isn’t typically present during a healthy pregnancy, samples of human placental tissue developed abnormal knot structures. Previous studies have linked these structures with high-risk pregnancies. Interferon signaling, and a fetus’s ability to detect and respond to infection, could be tied to adverse pregnancy outcomes in humans, the researchers speculated.

Now, Iwasaki wants to study interferon levels at different time points during pregnancy, which could give clues to how microcephaly and other major health issues associated with Zika develop. But the results are not specific to Zika, Iwasaki says. Interferons also link infections like Toxoplasma, rubella, and herpes to pregnancy complications. “We’re really excited to see whether the same kind of pathways are also involved in these infections,” she says.

This discovery has clinical implications that go beyond viruses, Iwasaki notes. Women with autoimmune diseases, such as lupus, have higher levels of type I interferons. They also have a difficult time with pregnancies. “If we could prevent or treat the interferon response in women with these diseases,” she says, “pregnancy may go better for them.”