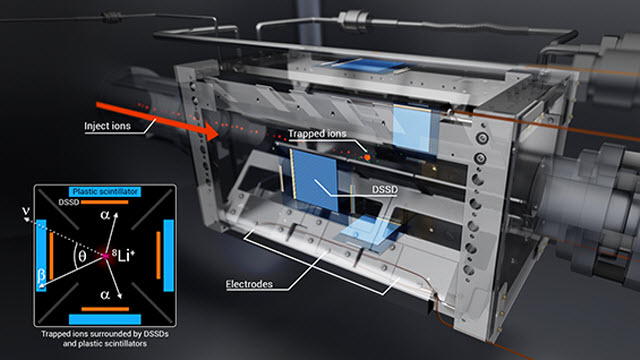 Radioactive ions from the ATLAS accelerator at Argonne National Laboratory were suspended in vacuum using an ion trap device installed at the facility. Double-sided silicon detectors (DSSD) surrounding the trap record positions and energies of the emitted electron and alpha particles, from which the neutrino momentum can be reconstructed (see inset).Image courtesy of Lawrence Livermore National Laboratory

Studies of beta decay, which involves an electron and antineutrino being emitted from a nucleus, can reveal new properties of the weak nuclear force—one of the four fundamental forces in the universe. Scientists performed an exquisitely precise measurement of the angular distribution of neutrinos emerging from beta decay using a completely novel approach to the experimental challenge of revealing the extremely subtle imprint of tensor interactions, subtle processes that have long defied measurement due to their modest imprint on nuclear processes.

These new measurements will help hone our theoretical understanding of the weak force; such understanding could one day lead to a deeper understanding of the inner workings of our sun and other stars as well as provide valuable insights for fusion energy. The results are consistent with current particle physics theories and set general limits on possible additional contributions to the weak nuclear force.

For the first time in over half a century, the search for a particular type of interaction, known as a tensor interaction, in nuclear beta decay has been advanced. Tensor interactions are subtle processes that have long defied measurement due to their modest imprint on nuclear processes. Determining whether a tensor interaction is actually at work, however, can have deep implications for theoretical descriptions of nuclear physics and matter itself. The properties of the weak nuclear force are being studied in a variety of atomic, nuclear, and high-energy physics experiments. The most general search for tensor interactions in nuclear beta decay had been dominated until this point by a single experiment performed in the early 1960s. Now scientists have taken a great leap forward with a measurement of the angular distribution of the neutrinos from the decay of 8Li. The prevailing theory predicts that the electron and antineutrino are predominantly emitted in opposite directions. However, the scientists showed that new effects not encompassed by the current theory could lead to a slight modification to this emission pattern.

By suspending radioactive 8Li nuclei (produced by the ATLAS accelerator at Argonne National Laboratory) in vacuum using only electromagnetic fields from an ion trap surrounded with detectors, the electron and two alpha particles emitted in the decay and subsequent breakup of the recoiling nucleus were precisely measured by a collaboration between the Lawrence Livermore National Laboratory, Argonne National Laboratory, and a number of universities. From this information, the energy and direction of each emitted antineutrino, despite them being virtually undetectable, could be accurately determined from energy and momentum considerations. The result of this study takes advantage of modern ion trapping techniques and radiation detectors to improve this type of search for new contributions to the weak nuclear force.