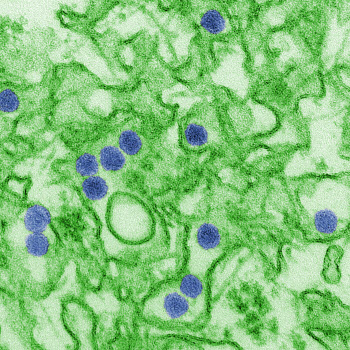 A digitally-colorized transmission electron micrograph (TEM) of the Zika virus.Image credit: CDC/ Cynthia Goldsmith, Wikimedia CommonsWASHINGTON - Despite dire predictions that the Zika virus could affect much of the United States including large cities this summer, two public health law experts warn that the country is unprepared, and the financial and moral consequences could be significant.

Writing in a JAMA Viewpoint published online Apr. 13, Lawrence O. Gostin of Georgetown University and James G. Hodge Jr., of Arizona State University, say much of the blame for the “failure to act decisively” lies with the U.S. Congress.

The Zika virus is known to spread primarily by mosquitoes. Currently, the active transmission of the virus is occurring in more than 40 countries in the Americas, Pacific Islands/Oceania and the Caribbean including the U.S. territory of Puerto Rico. Scientific consensus is emerging linking the Zika virus to severe birth abnormalities, including microcephaly, and neurologic disorders in adults including Guillain-Barre syndrome.

The mosquito that carries Zika is expected to embed in much of the United States this summer. U.S. Health and Human Services Secretary Sylvia Burwell has warned that Zika has a “significant potential to affect national security or the health of Americans.”

“With Zika spinning out of control in the Americas and Caribbean, it is only a matter of time before we see outbreaks in the continental United States,” says Gostin.

Earlier this year, President Obama requested $1.86 billion for surveillance, mosquito control, research, and health services, but Congress has not approved the funding.

“We know that Zika is coming, and yet Congress stubbornly refuses to appropriate funding to ensure we are ready,” Gostin says. “That is shameful and there will be a political price to pay.”

In the absence of Congressional action, the President reallocated $589 million of designated Ebola funds to Zika preparedness, research, and the creation of response teams.

“This is like robbing Peter to pay Paul,” Gostin says. “The United States made a pledge to West African countries to help rebuild their health systems and to detect and respond to emerging threats. Yet just when new cases are arising in West Africa, the United States is welching on its commitment to fight Ebola. It is morally wrong and short sighted for Congress to force the President’s hand. In order to protect the homeland from Zika, he has had to shortchange some of the world’s poorest countries.”

In their JAMA article, Gostin and Hodge explain that a huge gap in funding that remains leaves the country’s health agencies without the resources for surveillance, mosquito control and health care services, and they point out that development of a preventive vaccine could be delayed. They also warn of the cost of care for Zika-related health impacts, especially among newborns.

“Beyond cost, Zika has deep moral dimensions, with impoverished women and their newborns at greatest risk,” Gostin and Hodge write.

Gostin adds, “Imagine if nine months after clusters of Zika cases emerge in the Univted States, babies are born with abnormalities. It will cause a moral outrage.”

Gostin and Hodge say with proper funding, research could be conducted that would help answer serious questions including how long the body harbors the virus, the duration that patients remain immune, or when it becomes safe for women to become pregnant. And they say full funding is critical to mosquito abatement.

Gostin and Hodge warn that the “failure to fund Zika preparedness would be a serious public health and political mistake” and they remind us that “Ebola demonstrated that even advanced health systems can fail to eliminate the risks of novel infections,” referring to the cases of Ebola transmitted to health care workers in Dallas in the fall of 2014.

They conclude, “The nation’s state of preparedness is compromised by Congress’s inaction on supplemental funding and the weak capacities and powers of states and localities. If preventable cases of Zika-related infant abnormalities emerge, there will be a high political price for the failure to act decisively.”

Gostin is faculty director of the O’Neill Institute for National and Global Health Law. He served on the National Academy of Medicine’s Commission on a Global Health Risk Framework for the Future whose report earlier this month warned of health system deficiencies specifically in managing a pandemic disease crisis.

Hodge is professor of public health law and ethics, and director of the Public Health Law and Policy Program at the Sandra Day O’Connor College of Law at Arizona State University.