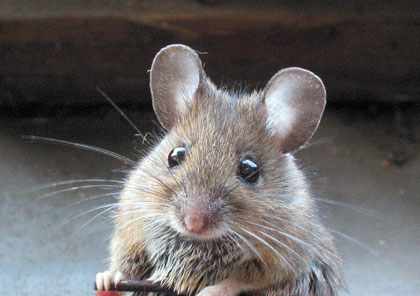 Some wood mice off the coast of Wales have evolved to nearly twice the size of their counterparts on the European mainland.Photo credit: Rasbak via Wikimedia CommonsDURHAM, NC - Researchers have analyzed size data for rodents worldwide to distinguish the truly massive mice and giant gerbils from the regular-sized rodents. They found that the furry animals with chisel-like teeth are 17 times more likely to evolve to nightmarish proportions on islands than elsewhere.

The results are in keeping with an idea called the “island rule,” which previous studies claimed didn’t apply to rodents. The study appears online in the journal Proceedings of the Royal Society B.

There may be nothing remarkable about a 100-pound capybara -- a South American rodent the size of a St. Bernard -- if that’s the norm for that species, the researchers say. The question gnawing at Durst and Roth was identifying the rodents that, over time, have become exceptionally large or small for their kind.

In other words, which parts of the world are home to the hugest hamsters, or the smallest squirrels?

The answer was islands. More than half of the rodent populations on the 182 islands they looked at weighed in among the top or bottom 2.5 percent for size for their species.

Take Coues' rice rat, for example, which researchers believe got to the island of Cozumel from nearby Mexico and Guatemala. Some island populations have grown to more than twice the size of their mainland counterparts.

“Deer mice, too, are nearly twice as big on the Gulf Islands off the coast of Vancouver than on the North American mainland,” said Durst, who is now a postdoctoral fellow at the University of North Carolina at Chapel Hill.

Scientists don’t know how long ago most rodents arrived on the islands from the mainland territories where they originated, or how long each took to reach peculiar proportions.

But for the most part, the researchers discovered that the extreme cases were unusually large, rather than unusually tiny.

The few dwarfs in their dataset are found on hot, dry islands that are particularly brown or barren rather than lush and green. An Asian tree squirrel called Finlayson's squirrel, for example, has shrunk by half since arriving on the Thai island of Ko Lan.

“They don’t have the resources they need to get big,” Durst said.

Data collected for animals like elephants and deer in the decades that followed proved largely consistent with the island rule, but until recently the question of whether rodents followed the same size trends was far from clear cut.