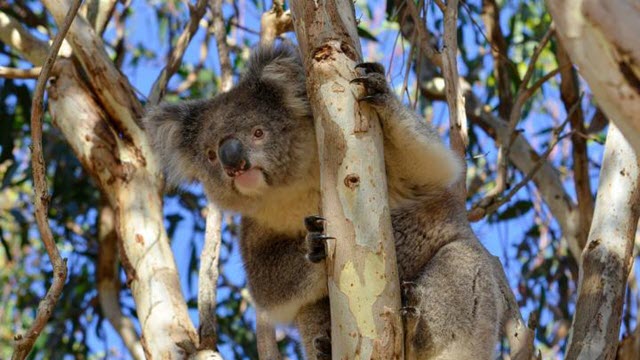 The cuddly koala bear could help us explain our very own genomeCREDIT: Chris Fithall

A koala virus could help researchers explain millions of years of accumulated 'junk' DNA in the human genome.

An international team of researchers—including scientists from The University of Queensland—is studying a virus infecting koalas in the hope it could demonstrate how viruses have altered the DNA of humans and other species throughout history.

Virologist professor Paul Young, the head of UQ's School of Chemistry and Molecular Biosciences, said the team has analyzed the effects of the retrovirus infection.

"Retroviruses insert their genome into their host's chromosome, from where they make more copies of themselves," he said.

"Some can also infect what are known as germline cells, which alters the host genetic code and that of all their descendants."

Retrovirus insertions in humans date back more than five million years, which means it's difficult to know what happened when the first interactions took place.

"About a decade ago, we discovered that the wild koala population was being invaded by a retrovirus," professor Young said.

"This isn't great news for the koala, but it has provided us with an opportunity to study what's happening to these retroviral genomes early in their association with a new host."

He said new retroviruses within a species could continue to replicate with disastrous consequences but, over time, their disease-causing effects usually stopped and either took on new functions or became inert 'junk' DNA.

"Until now, scientists could only guess at why and how this happened," professor Young said.

UQ's professor Joanne Meers said it would be exciting to see a retrovirus in action.

"Because the koala retrovirus is still relatively young—less than 50,000-years-old—and not yet 'fixed' in a certain location within the koala genome, scientists can monitor this early engagement between a retrovirus and its host."

Professor Alex Greenwood, from the Leibniz Institute for Zoo and Wildlife Research in Berlin, said this was an important opportunity.

"This means that the koala, a species not usually associated with biomedical breakthroughs, is providing key insights into a process that has shaped eight percent of the human genome, and will likely show us what happened millions of years ago when retroviruses first invaded the human genome."