The nation’s blood supply is safer than ever, due to the ever-vigilant efforts of federal agencies, blood-donation centers and hospitals.

When people donate blood, the FDA mandates screening for the presence of at least ten different infectious diseases before being approved for use by the estimated 5 million people whose lives are saved each year by transfusions. 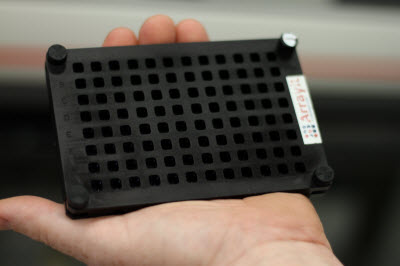 ASU Biodesign Institute researcher Phillip Stafford proposed utilizing a test called immunosignaturing, a tool that transforms a single drop of blood into a snapshot of the immune system.Photo courtesy of Arizona State UniversityBut while visiting a local lab that performs some of these quality-control tests, Arizona State University (ASU) Biodesign Institute researcher Phillip Stafford couldn’t help but notice that each sample was tested with ten different test kits for each of the ten infectious germs, which seemed to be a very time-consuming and expensive process.

At Creative Testing Solutions, a blood-testing facility in Tempe, it can take 12 hours to test each blood sample once it arrives at their facility, and it can take between one to six months to train lab techs on all the various test kits that they use.

“That’s the way they have been doing it for years, and they haven’t really requested that anything be done about it; that’s just the way things are,” said Stafford, a biostatistician at the Biodesign Institute at Arizona State University. “So I thought it might be cheaper, easier, and faster to train people if they only use one type of device for testing all the different types of infections.”

He proposed utilizing a test called immunosignaturing, a tool that transforms a single drop of blood into a snapshot of the immune system. Rather than look for individual diseases, this test can show if the immune system is currently fighting any infection.

The tool has 125,000 peptides arranged randomly on a wafer. When blood containing antibodies to West Nile virus are added to it, the antibodies will bind to some peptides and not others, creating a distinctive pattern. A computer converts the pattern into what looks like a series of bright and dark dots on the computer screen. One dotted pattern is unique to West Nile virus, and a different one will appear for another disease. 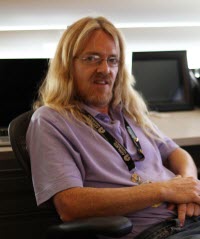 ASU Biodesign Institute researcher Phillip Stafford.Photo courtesy of Arizona State UniversityStafford has received a $1.2 million grant from the National Institute of Biomedical Imaging and Bioengineering (NIBIB) at the National Institutes of Health (NIH) for screening the blood supply with his new simple test. Creative Testing Solutions, which tests 5 million blood donations annually, will be assisting this effort by providing blood samples that Stafford can use to test his technology.

“We test all over the U.S., so they have to fly the blood samples to us so that we can test them,” said Phillip Williamson, vice president of operations and scientific affairs at Creative Testing Solutions. “Unless there’s some unusual circumstance, or they’re really far away, most of the Central Life Services can get their products to us in four to six hours.”

If they were to utilize immunosignaturing to test the blood supply, it would require much less blood to test for a multitude of diseases.

“Any technology that reduces the amount of blood that we need to test would be beneficial, because if we can ship one tube, instead of three tubes, that’s 66 percent less stuff to ship,” said Williamson. “And we literally spend millions of dollars a year just moving the samples around.”

If this new technology receives FDA approval, Williamson said that they might be open to using it. “Again, we have cost constraints. We’re not only trying to do it quickly and make sure we assure appropriate safety, but if it’s a thousand dollars a test, that’s not really feasible from our standpoint. It’s going to have to be as cheap or cheaper than the current tests that are available,” he said. “But as far as the technology, I’m excited about it.”

With this technology there could potentially be a reference library of immunosignature dot patterns, each a unique pattern for many different viruses, protozoans, parasites, and bacterial infections, said Williamson. “So as long as you have this library of known things that you could be exposed to, then we really can be more safe. Because right now we’re doing ten tests—if you have 100 things in that library, by default that one sample gives you information about 100 things.”

If successful, Stafford could develop a technology that makes our blood supply even safer and more affordable for those in the business of saving lives. Stafford hopes to have validated the technology by the end of the two-year grant.