LOS ALAMOS, NM — April 8, 2021 — While attention has been focused on the Perseverance rover that landed on Mars last month, its predecessor Curiosity continues to explore the base of Mount Sharp on the red planet and is still making discoveries. Research published today (Apr. 8) in the journal Geology shows that Mars had drier and wetter eras before drying up completely about 3 billion years ago.

"A primary goal of the Curiosity mission was to study the transition between the habitable environment of the past, to the dry and cold climate that Mars has now. These rock layers recorded that change in great detail," said Roger Wiens, a coauthor on the paper and scientist at Los Alamos National Laboratory, where he is on the ChemCam team. ChemCam is the rock-vaporizing laser that sits on the mast of the Curiosity rover and analyzes the chemical composition of Martian rocks.

William Rapin, a researcher with the French National Centre for Scientific Research (CNRS), led the study.

Using the long-range camera on ChemCam to make detailed observations of the steep terrain of Mount Sharp, a team including Wiens and other researchers at Los Alamos discovered that the Martian climate alternated between dry and wetter periods before it went completely dry. Spacecraft in orbit around Mars had previously provided clues about the mineral composition of the slopes of Mount Sharp. Now, ChemCam has successfully made detailed observations of the sedimentary beds from the planet's surface, revealing the conditions under which they formed. 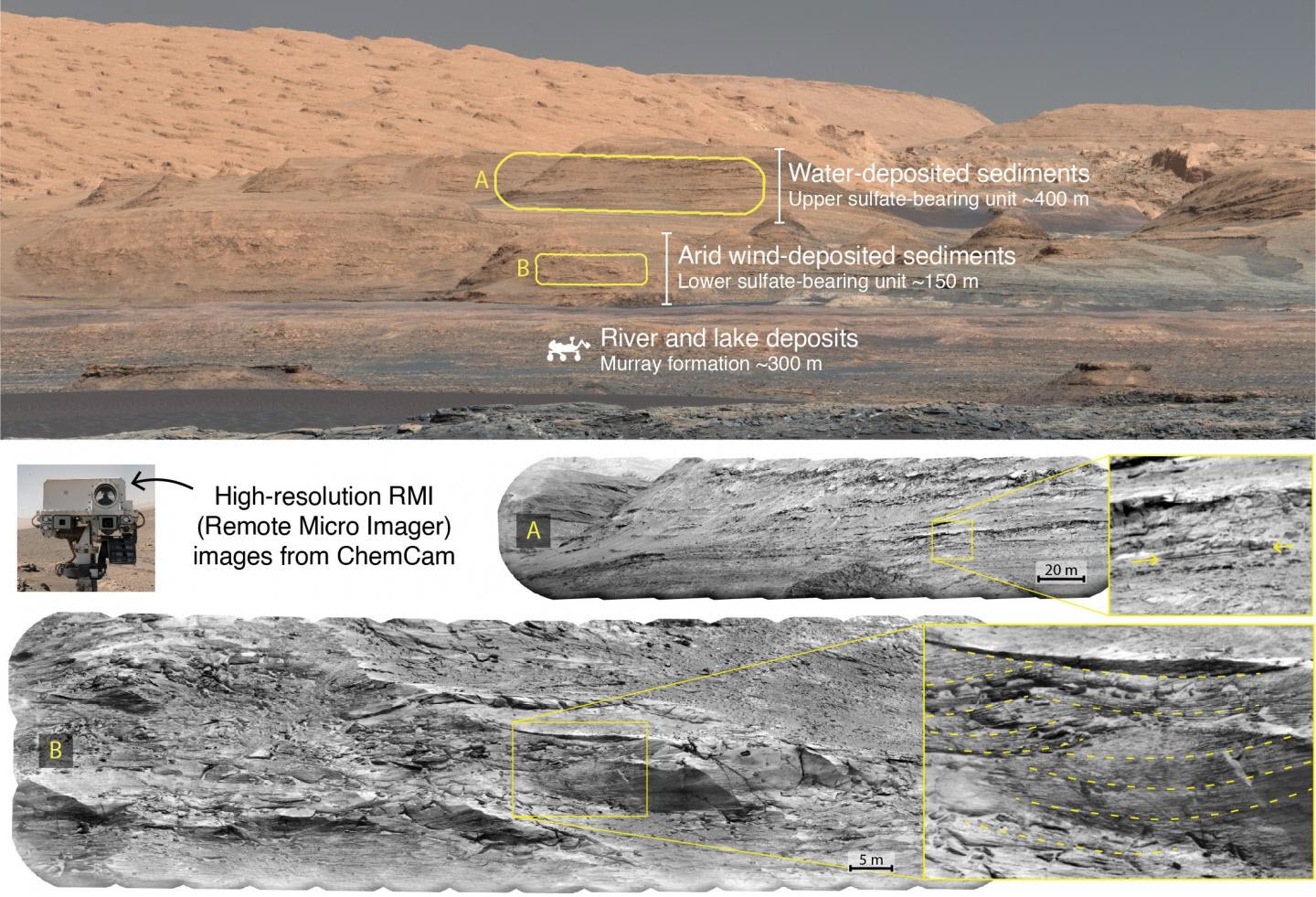 View of the slopes of Mount Sharp, showing the various types of terrain that have been and will be explored by the Curiosity rover. The sedimentary structures observed by ChemCam's telescopic images (mosaics A and B) reveal clues about the ancient environments in which they formed.
NASA/JPL-Caltech/MSSS/CNES/CNRS/LANL/IRAP/IAS/LPGN

Moving up through the terrain, Curiosity observed that the types of bed change drastically. Lying above the lake-deposited clays that form the base of Mount Sharp, sandstone layers show structures indicating their formation from wind-formed dunes, suggesting long, dry climate episodes. Higher up still, thin alternating brittle and resistant beds are typical of river floodplain deposits, marking the return of wetter conditions.

These changes in terrain show that the climate of Mars underwent several large-scale fluctuations between wetter and dryer periods, until the generally arid conditions observed today took hold. During its extended mission, Curiosity is scheduled to climb the foothills of Mount Sharp and drill into its various beds for a closer look at these fascinating materials.

The ChemCam laser instrument uses an infrared-colored laser beam, which heats rock fragments to around 18,000 degrees Fahrenheit (10,000 degrees Celsius), vaporizing them. The plasma produced by this process allows scientists to analyze the chemical and mineral composition of the rocks, which convey important information about the geological history of Mars. The instrument also has a high-resolution camera. ChemCam is commanded alternately from Los Alamos in New Mexico and the French Space Agency in Toulouse, as a partnership between Los Alamos National Laboratory and the IRAP research center. Every week, the operations change hands between the two locations. Together, the ChemCam team has published over 100 scientific papers on its discoveries from more than 850,000 laser zaps.

- This press release was originally published on the Los Alamos National Laboratory website. It has been edited for style