There is a huge number of human problems that scientists and engineers have solved by drawing ideas directly from mechanisms found in other lifeforms, from Velcro to Japan's famous bullet trains, the Shinkansen. Thus, it should not come as a surprise to know that many remarkable advances in anti-reflective coating were inspired by the peculiar biostructures found in moth eyes.

As mainly nocturnal animals that wish to stay hidden from surrounding predators, moths have evolved to develop eyes that are non-reflective. Their eyes have a periodic nanometric structure that makes the eye surface graded, as opposed to polished. This causes most incident light to bend at the surface and therefore, be transmitted through the eye instead of being reflected off it. This nanoscale arrayed structure is so effective that researchers have tried to mimic it using other materials to create anti-reflective coatings with varying degrees of success.

However, in spite of the recent progress in nanoscience that allows the adoption of this idea for various practical applications, there are still barriers to overcome in terms of scalability and cost of manufacturing. To tackle these problems, scientists from Tokyo University of Science and Geomatec Co., Ltd., Japan, have been working on a novel strategy to produce moth-eye nanostructures and transparent films. In their latest study, published in Micro and Nano Engineering, they present a promising method to fabricate moth-eye molds and films at large scales.

Though this research team had previously succeeded in creating moth-eye molds made of glassy carbon etched with an oxygen ion beam, this approach was not scalable. "Producing glassy carbon substrates requires the use of powder metallurgy technology, which is difficult to use to produce molds with a large area," explains professor Jun Taniguchi from Tokyo University of Science, "To overcome this limitation, we tried using only a thin layer of glassy carbon deposited on top a large regular glass substrate."

Moreover, to make this new strategy feasible, the team opted this time to use an inductively coupled plasma (ICP) system as opposed to the previously used electron-cyclotron resonance ion source. While both devices can etch glassy carbon using a concentrated beam of oxygen ions, ICP technology produces a wider ion beam irradiation range, which is more suitable for working on large-area structures. 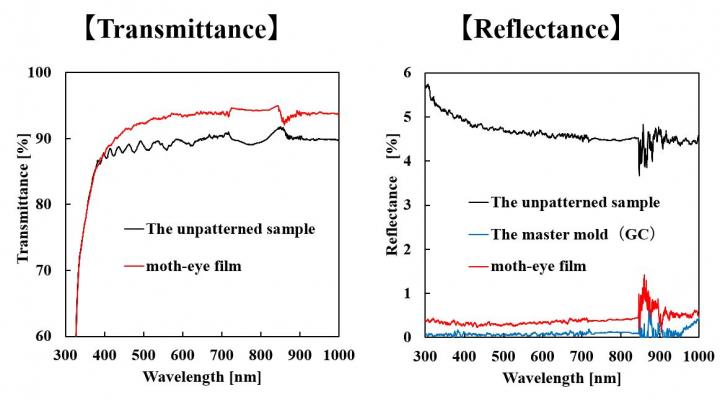 Optical properties of the moth-eye film compared with those of a sample without the nanostructured pattern. Both transmittance and reflectance are improved by the moth-eye structure, demonstrating its anti-reflective properties.
Jun Taniguchi, Tokyo University of Science

After testing with different ICP parameters, the researchers determined that a two-step ICP etching process was best to obtain a high-quality nanostructured mold. Then, they used this mold to produce a transparent film with a moth-eye nanostructure using a UV-curable resin.

The optical properties of this film were remarkable; its reflectance toward light in the visible range was only 0.4 percent, 10 times lower than that of a similar film without the moth-eye nanostructure. What's more, the transmittance of light through the material was also increased, meaning that no trade-off in optical properties occurred as a result of using the film to reduce reflected light.

Hiroyuki Sugawara, chief technical officer at Geomatec, highlights the many possible applications of such anti-reflective films if it were possible to produce them at the meter scale: "We could use these films to improve visibility in flat panel displays, digital signs, and the transparent acrylic plates used everywhere since the start of the COVID-19 pandemic. Moreover, anti-reflective coating could also be an efficient way to improve the performance of solar panels."

This study showcases how to expand the uses of biologically inspired structures by making their fabrication more easily scalable. Let us hope these technological advances help us preserve nature so that we can keep obtaining useful ideas from other species.