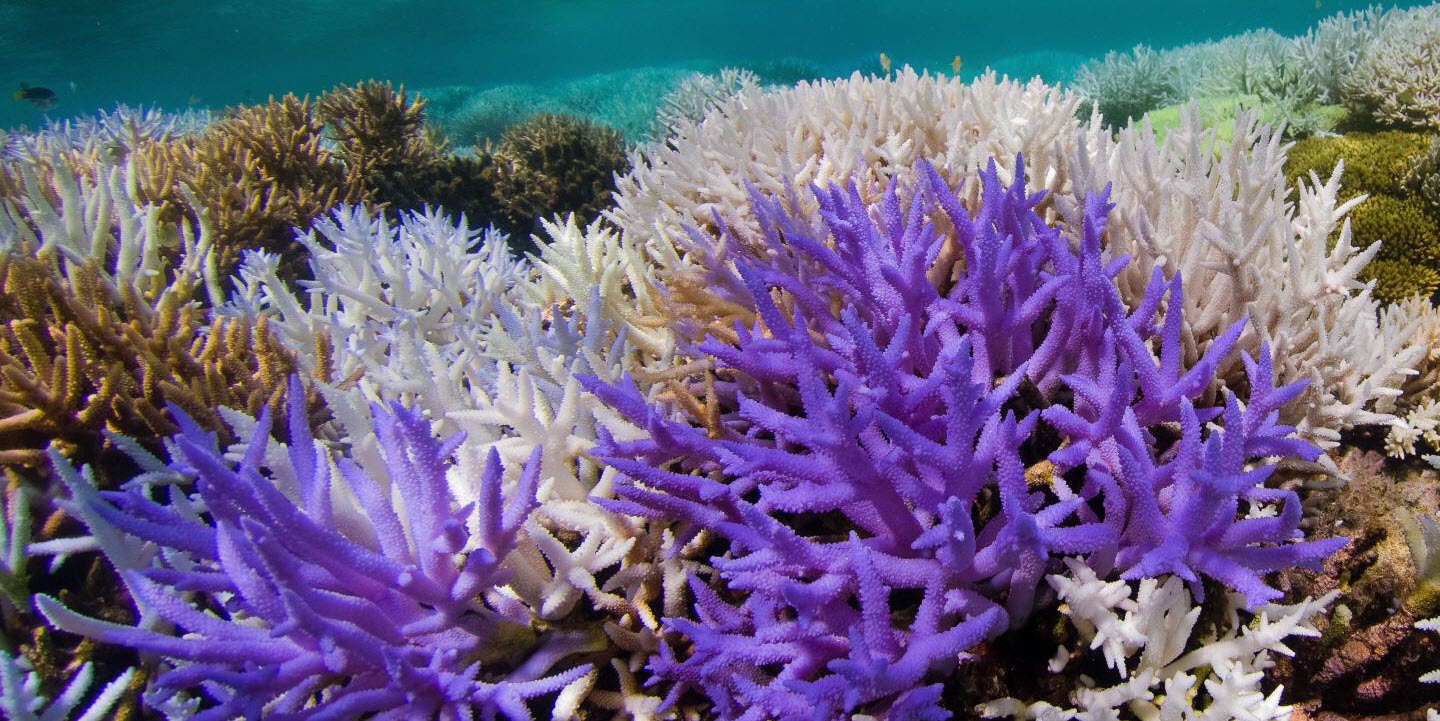 A new study by the University of Southampton has revealed why some corals exhibit a dazzling colorful display, instead of turning white, when they suffer 'coral bleaching'—a condition which can devastate reefs and is caused by ocean warming. The scientists behind the research think this phenomenon is a sign that corals are fighting to survive.

Many coral animals live in a fragile, mutually beneficial relationship, a 'symbiosis' with tiny algae embedded in their cells. The algae gain shelter, carbon dioxide and nutrients, while the corals receive photosynthetic products to fulfill their energy needs. If temperatures rise just 1°C above the usual summer maximum, this symbiosis breaks down; the algae are lost, the coral's white limestone skeleton shines through its transparent tissue and a damaging process known as 'coral bleaching' occurs.

This condition can be fatal to the coral. Once its live tissue is gone, the skeleton is exposed to the eroding forces of the environment. Within a few years, an entire coral reef can break down and much of the biodiversity that depends on its complex structure is lost—a scenario which currently threatens the future of reefs around the world.

However, some bleaching corals undergo an, until now, mysterious transformation—emitting a range of different bright neon colors. Why this happens has now been explained by a team of scientists from the University of Southampton's Coral Reef Laboratory, who have published their detailed insights in the journal Current Biology.

The researchers conducted a series of controlled laboratory experiments at the coral aquarium facility of the University of Southampton. They found that during colorful bleaching events, corals produce what is effectively a sunscreen layer of their own, showing itself as a colorful display. Furthermore, it's thought this process encourages the coral symbionts to return.

Professor Jörg Wiedenmann, head of the University of Southampton's Coral Reef Laboratory explains: "Our research shows colorful bleaching involves a self-regulating mechanism, a so-called optical feedback loop, which involves both partners of the symbiosis. In healthy corals, much of the sunlight is taken up by the photosynthetic pigments of the algal symbionts. When corals lose their symbionts, the excess light travels back and forth inside the animal tissue—reflected by the white coral skeleton. This increased internal light level is very stressful for the symbionts and may delay or even prevent their return after conditions return to normal.

However, if the coral cells can still carry out at least some of their normal functions, despite the environmental stress that caused bleaching, the increased internal light levels will boost the production of colorful, photoprotective pigments. The resulting sunscreen layer will subsequently promote the return of the symbionts. As the recovering algal population starts taking up the light for their photosynthesis again, the light levels inside the coral will drop and the coral cells will lower the production of the colorful pigments to their normal level."

The researchers believe corals which undergo this process are likely to have experienced episodes of mild or brief ocean-warming or disturbances in their nutrient environment—rather than extreme events. 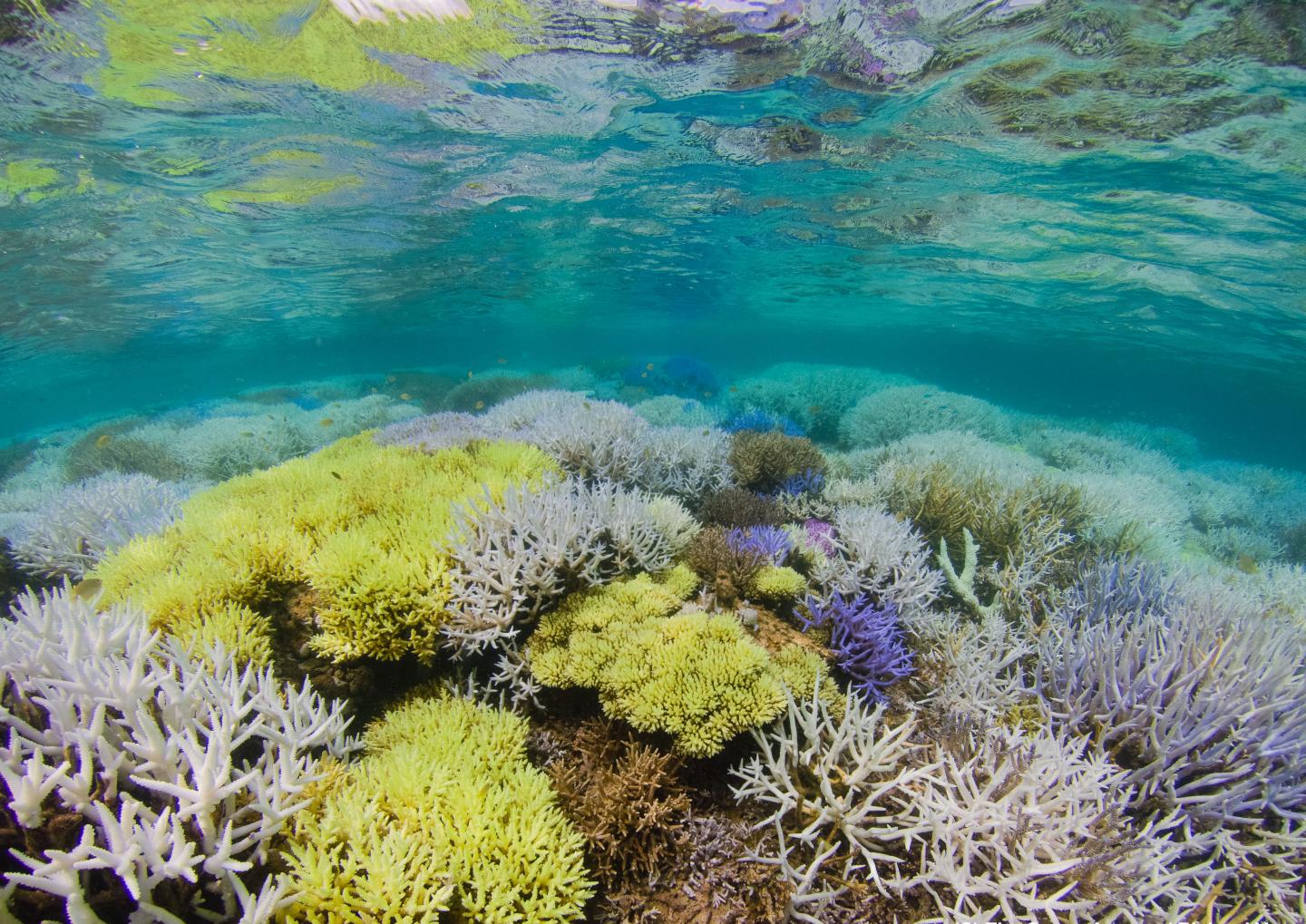 "Bleaching is not always a death sentence for corals, the coral animal can still be alive," comments Dr. Cecilia D'Angelo, lecturer of molecular coral biology at Southampton. "If the stress event is mild enough, corals can re-establish the symbiosis with their algal partner. Unfortunately, recent episodes of global bleaching caused by unusually warm water have resulted in high coral mortality, leaving the world's coral reefs struggling for survival."

Dr. Elena Bollati, researcher at the National University Singapore, who studied this subject during her PhD training at the University of Southampton, adds: "We reconstructed the temperature history of known colorful bleaching events around the globe using satellite imagery. These data are in excellent agreement with the conclusions of our controlled laboratory experiments, suggesting that colorful bleaching occurs in association with brief or mild episodes of heat stress."

The scientists are encouraged by recent reports suggesting colorful bleaching has occurred in some areas of the Great Barrier Reef during the most recent mass bleaching there in March-April 2020. They think this raises the hope that at least some patches of the world's largest reef system may have better recovery prospects than others, but emphasize that only a significant reduction of greenhouse gases at a global scale and sustained improvement in water quality at a regional level can save coral reefs beyond the 21st century.