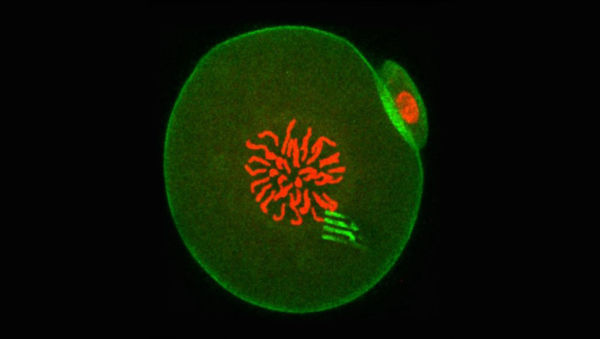 Fluorescence of an embryo containing a nanodevice
Credit: University of Bath

For the first time, scientists have introduced minuscule tracking devices directly into the interior of mammalian cells, giving an unprecedented peek into the processes that govern the beginning of development.

This work on one-cell embryos is set to shift our understanding of the mechanisms that underpin cellular behavior in general, and may ultimately provide insights into what goes wrong in aging and disease.

The research, led by professor Tony Perry from the Department of Biology and Biochemistry at the University of Bath, involved injecting a silicon-based nanodevice together with sperm into the egg cell of a mouse. The result was a healthy, fertilized egg containing a tracking device.

The tiny devices are a little like spiders, complete with eight highly flexible "legs." The legs measure the "pulling and pushing" forces exerted in the cell interior to a very high level of precision, thereby revealing the cellular forces at play and showing how intracellular matter rearranged itself over time.

The nanodevices are incredibly thin—similar to some of the cell's structural components, and measuring 22 nanometers, making them approximately 100,000 times thinner than a pound coin. This means they have the flexibility to register the movement of the cell's cytoplasm as the one-cell embryo embarks on its voyage toward becoming a two-cell embryo.

"This is the first glimpse of the physics of any cell on this scale from within," said professor Perry. "It's the first time anyone has seen from the inside how cell material moves around and organizes itself."

Why probe a cell's mechanical behavior?

The activity within a cell determines how that cell functions, explains Perry. "The behavior of intracellular matter is probably as influential to cell behavior as gene expression," he said. Until now, however, this complex dance of cellular material has remained largely unstudied. As a result, scientists have been able to identify the elements that make up a cell, but not how the cell interior behaves as a whole.

"From studies in biology and embryology, we know about certain molecules and cellular phenomena, and we have woven this information into a reductionist narrative of how things work, but now this narrative is changing," said Perry. The narrative was written largely by biologists, who brought with them the questions and tools of biology. What was missing was physics. Physics asks about the forces driving a cell's behavior, and provides a top-down approach to finding the answer.

"We can now look at the cell as a whole, not just the nuts and bolts that make it."

The researchers made their measurements by examining video recordings taken through a microscope as the embryo developed. "Sometimes the devices were pitched and twisted by forces that were even greater than those inside muscle cells," said Perry. "At other times, the devices moved very little, showing the cell interior had become calm. There was nothing random about these processes—from the moment you have a one-cell embryo, everything is done in a predictable way. The physics is programmed."

The results add to an emerging picture of biology that suggests material inside a living cell is not static, but instead changes its properties in a pre-ordained way as the cell performs its function or responds to the environment. The work may one day have implications for our understanding of how cells age or stop working as they should, which is what happens in disease.

The study is published this week in Nature Materials and involved a trans-disciplinary partnership between biologists, materials scientists and physicists based in the UK, Spain, and the USA.

This press release was originally published on the University of Bath website.