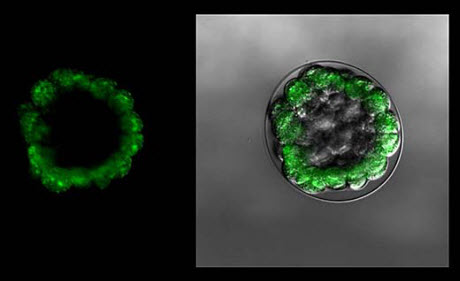 This white sea urchin embryo was exposed to nontoxic levels of nano-zinc oxide, commonly found in sunscreens. The green dye shows that other toxins are retained when exposed to nanomaterials, and not pumped out of the embryo by its natural defense mechanisms.Photo credit: UC Davis Bodega Marine LaboratoryThe study, published in the journal Environmental Science and Technology, is the first to show that the nanomaterials work as chemosensitizers. In cancer treatments, a chemosensitizer makes tumor cells more sensitive to the effects of chemotherapy.

Similarly, nanozinc and nanocopper made developing sea urchin embryos more sensitive to other chemicals, blocking transporters that would otherwise defend them by pumping toxins out of cells.

Nanozinc oxide is used as an additive in cosmetics such as sunscreens, toothpastes and beauty products. Nanocopper oxide is often used for electronics and technology, but also for antifouling paints, which prevent things like barnacles and mussels from attaching to boats.

“At low levels, both of these nanomaterials are nontoxic,” said co-author Gary Cherr, professor and interim director of the UC Davis Bodega Marine Laboratory, and an affiliate of the UC Davis Coastal Marine Sciences Institute. “However, for sea urchins in sensitive life stages, they disrupt the main defense mechanism that would otherwise protect them from environmental toxins.”

Nanomaterials are tiny chemical substances measured in nanometers, which are about 100,000 times smaller than the diameter of a human hair. Nano-sized particles can enter the body through the skin, ingestion, or inhalation. They are being rapidly introduced across the fields of electronics, medicine and technology, where they are being used to make energy efficient batteries, clean up oil spills, and fight cancer, among many other uses. However, relatively little is known about nanomaterials with respect to the environment and health.

“The hope is the science will try to stay abreast of the use of nanomaterials so there actually can be safe design,” Cherr said. “The nanotechnology industry wants to come up with designs that are practical but still safe for the environment and human health. The UC center is trying to help fine-tune this.”

The study’s other authors include Bing Wu, Cristina Torres-Duarte and Bryan Cole, all from the UC Davis Bodega Marine Laboratory. Wu is also affiliated with Nanjing University in China.