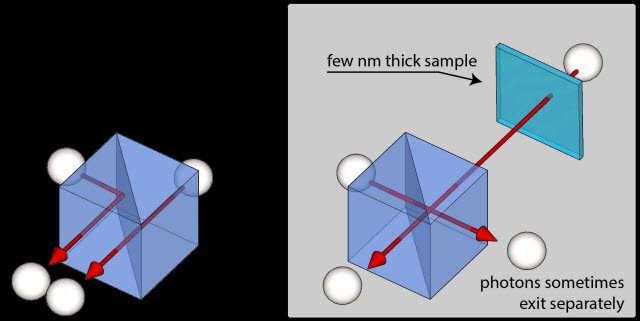 Image courtesy of the University of WarwickArtist's impression of photons entering the beamsplitter.

Using pairs of photons, fundamental components of energy that make up light, the researchers have devised a way to measure the thickness of objects that are less than a 100,000th of the width of a human hair.

The new technique involves firing two near identical photons onto a component known as a beamsplitter, and monitoring their subsequent behavior—with some 30,000 photons detected per second, and 500bn in use throughout a full experiment.

Because of the tendency of identical photons to ‘buddy up’ and continue traveling on together—the result of a delicate quantum interference effect—the researchers’ newly developed setup offers the same precision and stability as existing one-photon techniques that, due to the equipment required, are more costly.

Offering a range of potential uses, including research to better understand cell membranes and DNA, as well as quality control for nanoscopic 2D materials of a single atom’s thickness, such as graphene, the new research is also a marked improvement on current two-photon techniques with up to 100x better resolution.

Image courtesy of the University of WarwickDiagram of the technique for measuring nanoscopic structures.

To measure the thickness of a transparent object (any object through which a photon is able to pass), each of a pair of identical photons are fired along separate paths:

As the thickness of the sample is increased, the photons are more likely to exit the beamsplitter separately.

Dr. George Knee of the University of Warwick’s Department of Physics, who developed the theory behind the new method, said: 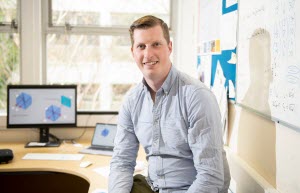 Dr. George Knee of the University of Warwick’s Department of Physics.Photo credit: University of Warwick“What’s really exciting about these results is that we can now investigate objects down at the nanoscale with an optical sensor operating on a fundamentally different physical effect. Until now, so-called two-photon interference has not been able to achieve such great resolution, meaning that we are stuck with some of the downsides of the established methods based on single-photon interference—which requires more expensive technology than our new two-photon technique. We have managed to get a big improvement by tuning the interferometer into a more sensitive operation mode and removing slow drift by repeatedly switching the sample in and out.

The advantages of being impervious to phase fluctuations and having large dynamic range mean that sensors such as ours could have a big impact on biological imaging and the associated research that it feeds into.”

QuantIC co-investigator and lead researcher on the project, professor Daniele Faccio, whose two photon sensing technology was used to generate the data said:

“The results of our collaboration with the University of Warwick offer a range of potential uses, including research to better understand cell membranes and DNA as well as a quality control for nanoscopic 2D materials of a single atom’s thickness, such as graphene. We are excited to be advancing quantum imaging and helping to maintain the UK’s position in the development of new quantum technologies.”

The research, "Attosecond-Resolution Hong-Ou-Mandel Interferometry," is published by Science Advances.