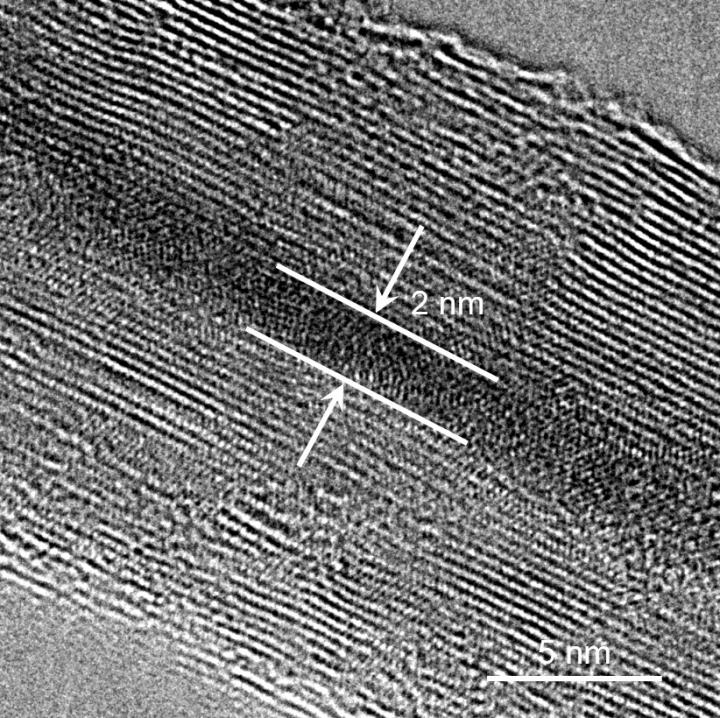 The tellurium encased in boron nitride nanotubes can be as thin as 2 nanometers and its current-carrying capacity beats out other existing semiconductors.
University of Texas at Dallas/Qingxiao Wang and Moon Kim

Wearable tech and electronic cloth may be the way of the future, but to get there the wiring needs to be strong, flexible and efficient.

Boron nitride nanotubes (BNNT), studied by physicists at Michigan Technological University, encase tellurium atomic chains like a straw, which could be controllable by light and pressure. In collaboration with researchers from Purdue University, Washington University, and University of Texas at Dallas, the team published their findings in Nature Electronics this week.

As demand for smaller and faster devices grows, scientists and engineers turn to materials with properties that can deliver when existing ones lose their punch or can't shrink enough.

For wearable tech, electronic cloth or extremely thin devices that can be laid over the surface of cups, tables, space suits and other materials, researchers have begun to tune the atomic structures of nanomaterials. The materials they test need to bend as a person moves, but not go all noodly or snap, as well as hold up under different temperatures and still give enough juice to run the software functions users expect out of their desktops and phones. We're not quite there with existing or preliminary technology—yet.

As implied by the "tube" of their nanostructure, BNNTs are hollow in the middle. They're highly insulating and as strong and bendy as an Olympic gymnast. That made them a good candidate to pair with another material with great electrical promise: tellurium. Strung into atom-thick chains, which are very thin nanowires, and threaded through the hollow center of BNNTs, tellurium atomic chains become a tiny wire with immense current-carrying capacity.

"Without this insulating jacket, we wouldn't be able to isolate the signals from the atomic chains. Now we have the chance to review their quantum behavior," Yap said. "The is the first time anyone has created a so-called encapsulated atomic chain where you can actually measure them. Our next challenge is to make the boron nitride nanotubes even smaller."

A bare nanowire is kind of a loose cannon. Controlling its electric behavior—or even just understanding it—is difficult at best when it's in rampant contact with flyaway electrons. Nanowires of tellurium, which is a metalloid similar to selenium and sulfur, is expected to reveal different physical and electronic properties than bulk tellurium. Researchers just needed a way to isolate it, which BNNTs now provide. 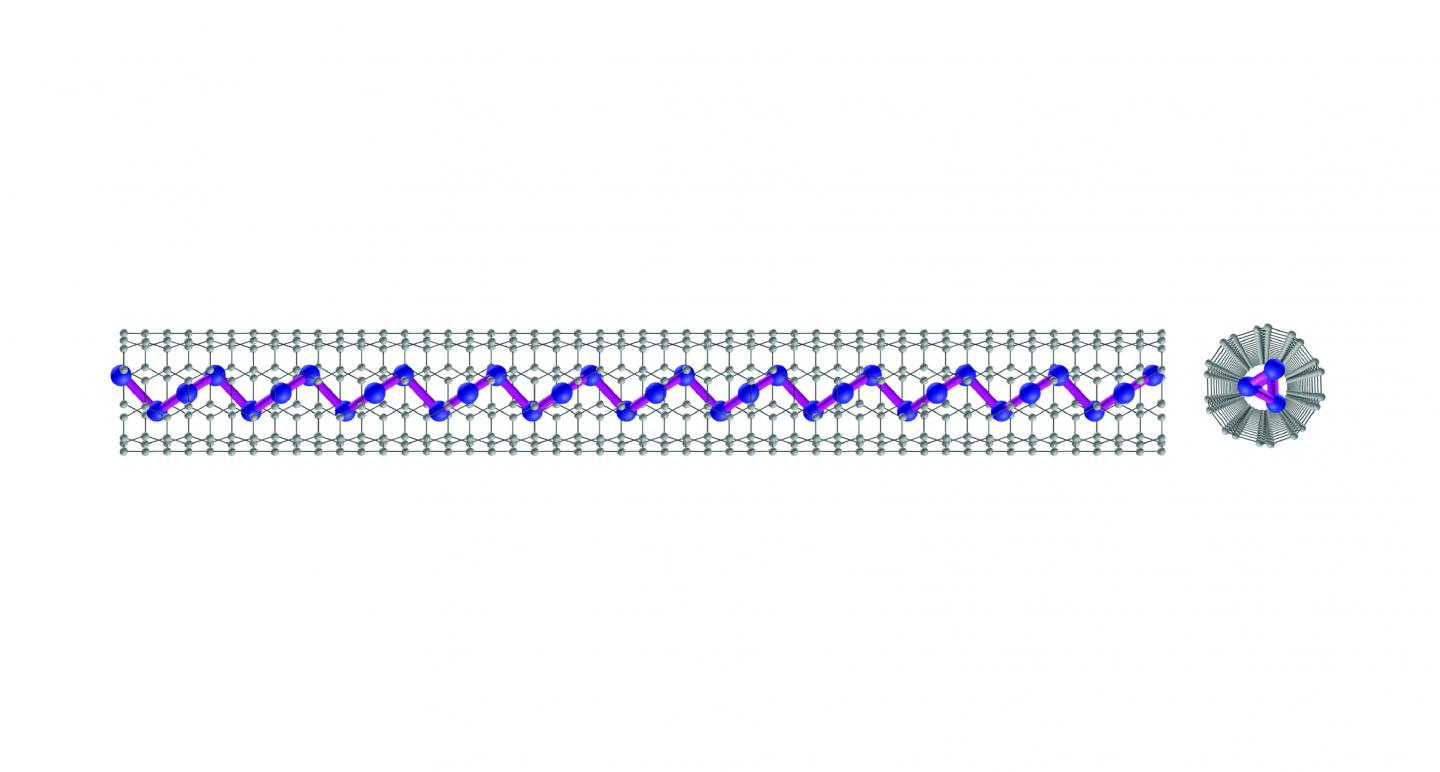 Researchers have discovered that a material forms a DNA-like helix when reduced to a string of atoms, as seen by the pink line in this graphic, encapsulated in a nanotube.
Purdue University/Pai-Ying Liao

"This tellurium material is really unique. It builds a functional transistor with the potential to be the smallest in the world," said Peide Ye, the lead researcher from Purdue University, explaining that the team was surprised to find through transmission electron microscopy at the University of Texas at Dallas that the atoms in these one-dimensional chains wiggle. "Silicon atoms look straight, but these tellurium atoms are like a snake. This is a very original kind of structure."

The tellurium-BNNT nanowires created field-effect transistors only 2 nanometers wide; current silicon transistors on the market are between 10 to 20 nanometers wide. The new nanowires current-carrying capacity reached 1.5x10^8 cm2, which also beats out most semiconducting nanowires. Once encapsulated, the team assessed the number of tellurium atomic chains held within the nanotube and looked at single and triple bundles arranged in a hexagonal pattern.

Additionally, the tellurium-filled nanowires are sensitive to light and pressure, another promising aspect for future electronics. The team also encased the tellurium nanowires in carbon nanotubes, but their properties are not measurable due to the conducting or semiconducting nature of carbon.

While tellurium nanowires have been captured within BNNTs, like a firefly in a jar, much of the mystery remains. Before people begin sporting tellurium T-shirts and BNNT-laced boots, the nature of these atomic chains needs characterizing before its full potential for wearable tech and electronic cloth can be realized.

- This press release was originally posted on MTU's website