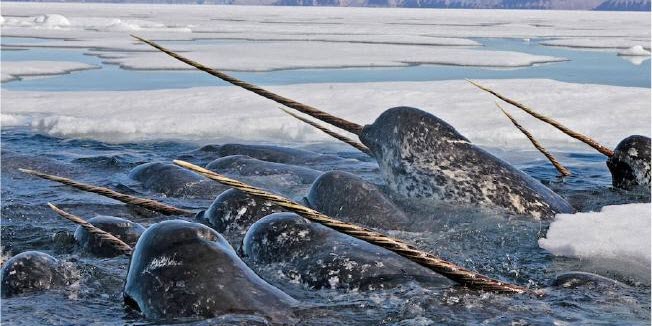 In the Arctic, climate change and pollution are the biggest threats to top predators like narwhals. Studying the animals' tusks reveals that diet and exposure to pollution have shifted over the past half century in response to sea-ice decline. Human emissions have also led to a sharp rise in the presence of mercury in recent years, according to an international team of researchers.

"Our research shows that climate change is having substantial impacts on Arctic ecosystems, with consequences for exposure to toxic pollutants like mercury," says co-author Jean-Pierre Desforges, a postdoctoral fellow at McGill University under the supervision of Nil Basu and Melissa McKinney.

Using natural growth layers in the tusk of male narwhals, the researchers were able to document yearly changes in mercury exposure dating back to the 1960s in a study published in Current Biology.

The narwhals' unicorn-like tusk projects from the left side of the upper jaw of the males and can reach up to three meters long. Just like rings in a tree trunk, every year a new growth layer is added to the narwhal's tusk.

Because the tusk is connected to the rest of body through blood, each new layer records aspects of the animal's physiology, the researchers explain. This includes information on what and where the animals have eaten each year and exposure to contaminants from human activity.

You are what you eat

"Heavy metals like mercury and other contaminants accumulate at each link in the food chain. The higher you are in the food chain, the more mercury you accumulate in your body throughout your life," says Desforges. Elevated amounts of heavy metals in the body are toxic and can affect cognitive functions, behavior, and the ability to reproduce.

The researchers found that from 1990 until 2000, narwhals accumulated relatively small quantities of mercury as the new prey sat lower in the food chain. Up until around 1990, the narwhals' food consisted particularly of prey linked to the sea ice, such as halibut and Arctic cod. During this period, the ice cover was extensive in areas like Baffin Bay.

After 1990, the ice cover declined consistently year after year and the diet of the narwhals changed to open ocean prey like capelin and polar cod. However, from around 2000, the amount of mercury increased significantly in the narwhal tusks without a simultaneous shift in diet. 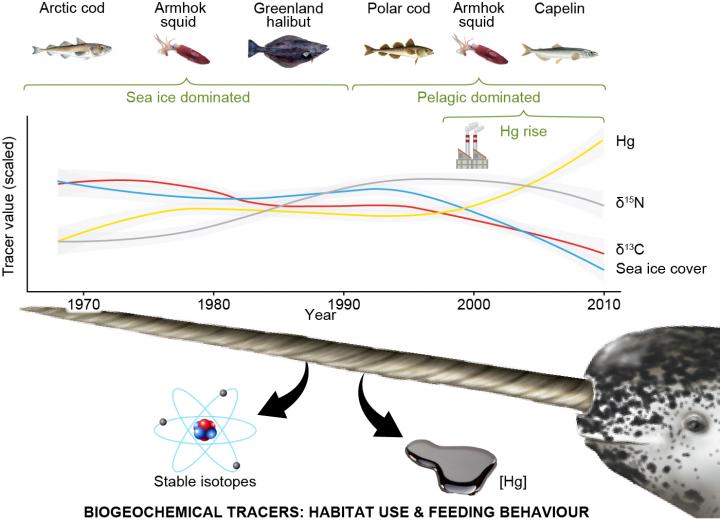 Data on δ13C, δ15N and mercury in narwhal tusks measured in layers corresponding to the period 1968-2010. The cover of summer sea ice for the same period is also shown.
Aarhus University, Denmark

The researchers attribute the rise in mercury emissions to on-going fossil fuel combustion in South-East Asia. The increase could also be due to changing sea ice conditions as the climate warms, causing changes in the environmental mercury cycle in the Arctic.

Over the past 30 to 40 years, climate change has reduced sea ice cover in the Arctic. Many species depend on the ice to evade predators and in their search for food or important breeding grounds. This affects the entire Arctic food chain and the living conditions of all species.

Changes in temperature and sea ice also lead to invasion by new species from warmer areas. For the narwhal, the ice acts as a protection against enemies like killer whales, they say.

"The narwhal is one of the Arctic mammals most affected by climate change. They lack the physiological properties that help eliminate environmental contaminants. They can't get rid of mercury by forming hair and feathers like polar bears, seals, or seabirds," explains co-author and professor Rune Dietz from the Department of Bioscience at Aarhus University in Denmark.

A window into Arctic conditions 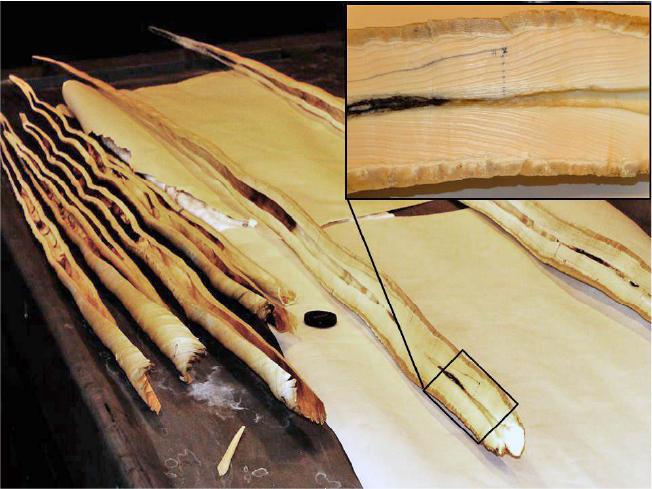 Analyses of the individual layers of narwhal tusks have provided information about their food choice and their exposure to mercury throughout their life.
Rune Dietz

The findings show that each layer of the narwhal tusk offers valuable information on the animals' living conditions and a window into developments in the Arctic.

"With our discovery, we now know that there's a bank of data in the narwhal tusks found in museums around the world. By analyzing them, we can hopefully get insight into the narwhals' food strategy from different periods. This will provide us with a solid basis for evaluating how the species copes with the changing conditions that it encounters today in the Arctic," says Dietz, who is also affiliated with Aarhus University's Arctic Research Centre.

- This press release was originally published on the McGill Newsroom website. It has been edited for style