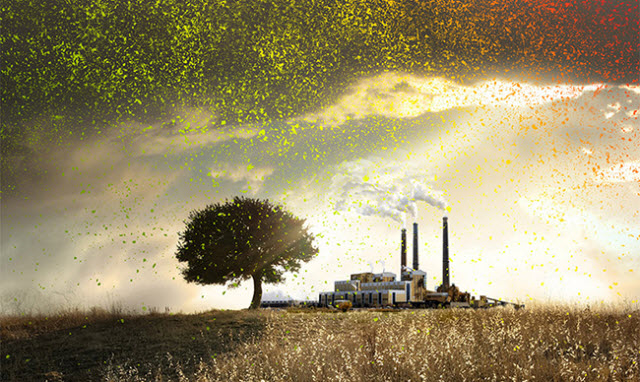 You've seen it when flying into major cities the world over: a haze over the city. It is caused by aerosol particles, but scientists don't know all the details of the complex chemistry involved. At Pacific Northwest National Laboratory, Dr. Alla Zelenyuk and her team took on a specific part of that haze: originated from isoprene. After being released by the trees and shrubs, isoprene reacts in the atmosphere and becomes assorted chemicals, including IEPOX (isoprene epoxydiols). The team found that IEPOX is a major player in producing aerosols from isoprene and that particle size, certain coatings, and acidity influence how IEPOX behaves.

"Before our study, the most basic aspects of the reaction between gas-phase IEPOX and anthropogenic sulfate particles and the effect of particle coatings were unknown," said Dr. Alla Zelenyuk, a physical chemist and co-corresponding author on the study. "Now, we know that the reaction with pure sulfate particles is volume controlled and that organic coatings impede IEPOX uptake."

The air we breathe contains gases and tiny aerosol particles that contribute to respiratory problems and climate change. To remediate or regulate them, scientists must know how the particles form and behave, yet previous studies didn't account for nature's messier side, including ubiquitous coatings and differing particle sizes. The study shows how real-world conditions affect the chemistry induced by sulfate-containing aerosols caused by anthropogenic activities. That information can be used by those modeling these aerosols.

The key to the investigation is the use of SPLAT, an instrument that lets scientists examine individual particles with unprecedented level of detail. This powerful instrument, funded by DOE's Office of Science, was created for laboratory studies and atmospheric studies in the field. It's available to scientists worldwide through EMSL's user proposal system.

Using SPLAT, the team showed, for the first time, that the IEPOX reaction with uncoated ammonium bisulfate and ammonium sulfate particles is volume controlled, which means that at the end of the reaction particles of all sizes contain the same amount of IEPOX products.

In another set of experiments, they coated the sulfate particles with atmospheric products of α-pinene, the gas responsible for that distinctive pine tree smell, and then added IEPOX. Here, size plays the major role in IEPOX uptake. Smaller particles have higher concentration of coating than larger ones. As a result, smaller particles take up less IEPOX than the larger ones.

The atmosphere contains a large number of compounds, with very different properties, that can coat sulfate particles, and their effect on the reaction with IEPOX remains unknown. The team plans to explore and quantify their effect on this reaction.

Sponsors: The authors wish to thank the Camille and Henry Dreyfus Postdoctoral Fellowship Program in Environmental Chemistry for their financial support. This work is also funded in part by the National Science Foundation, the Carlsberg Foundation and the Centre of Excellence Cryosphere-Atmosphere Interactions in a Changing Arctic Climate (CRAICC) funded by NordForsk. Work by A.Z. and the development of the advanced single particle analysis methods (A.Z.) were supported by the U.S. Department of Energy, Office of Science, Office of Basic Energy Sciences, Division of Chemical Sciences, Geosciences, and Biosciences.