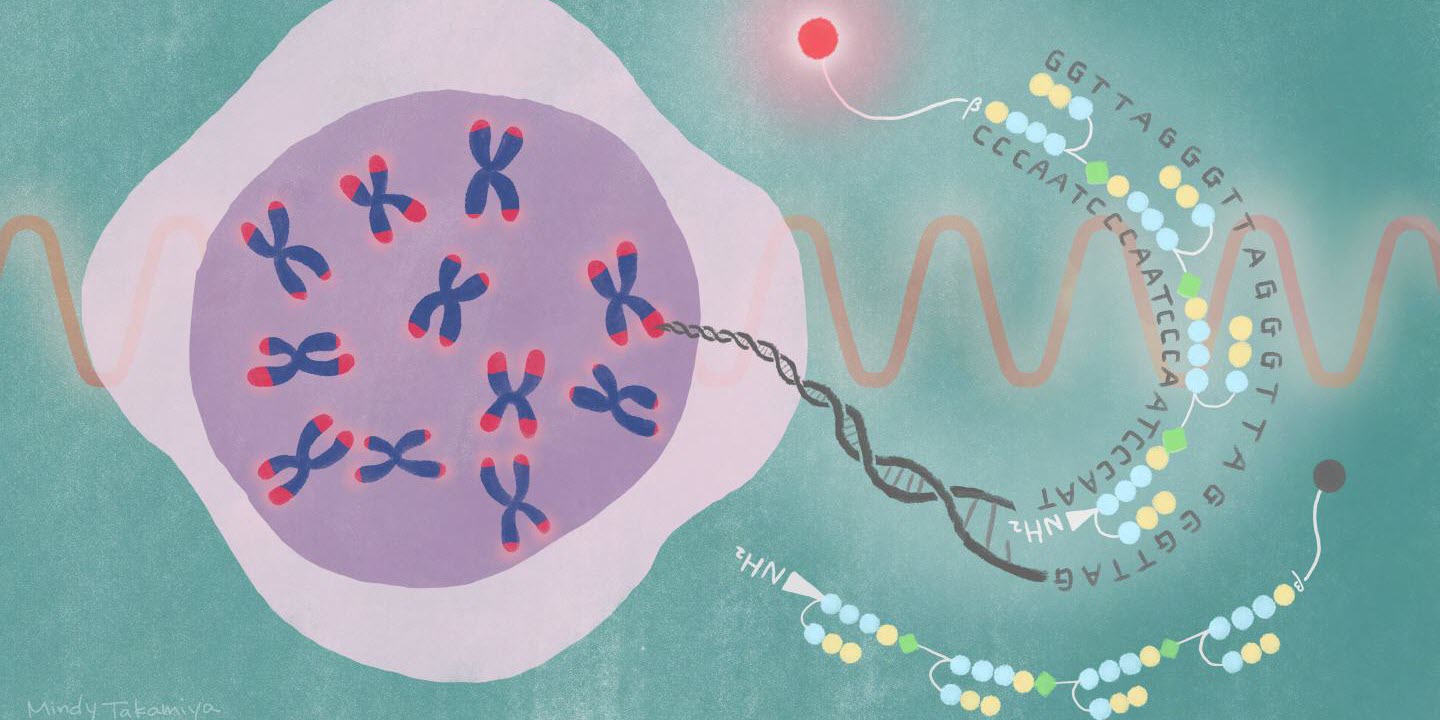 A fluorescent compound was attached to the PIP that targets the DNA repeating sequence found in telomeres. This probe, called SiR-TTet59B, enables observation of telomeres in action.
Mindy Takamiya/Kyoto University iCeMS

A new synthetic probe offers a safe and straightforward approach for visualizing chromosome tips in living cells. The probe was designed by scientists at the Institute for Integrated Cell-Material Science (iCeMS) and colleagues at Kyoto University, and could advance research into aging and a wide range of diseases, including cancers. The details were published in the Journal of the American Chemical Society.

"Chromosome ends are constantly at risk of degradation and fusion, so they are protected by structures called telomeres, which are made of long repeating DNA sequences and bound proteins," says iCeMS chemical biologist Hiroshi Sugiyama, who led the study. "If telomeres malfunction, they are unable to maintain chromosome stability, which can lead to diseases such as cancer. Also, telomeres normally shorten with each cell division until they reach their limit, causing cell death."

Visualizing telomeres, especially their physical arrangements in real time, is important for understanding their relevance to disease and aging. Several visualization approaches already exist, but they have disadvantages. For example, some can only observe telomeres in preserved, or "fixed," cells. Others are time consuming or involve harsh treatments that denature DNA.

Sugiyama and his colleagues overcame these issues by using a synthetic pyrrole-imidazole polyamide (PIP) probe that can precisely deliver a fluorescent compound to telomeres on the tips of chromosomes.

Related Article: A Timeline of the CRISPR/Cas System

"PIPs are a class of small molecules made from pyrrole and imidazole molecules that can be pre-programmed to bind to a selected DNA sequence," explains Yutaro Tsubono, the first author of this study.

The team designed a PIP that targets the DNA repeating sequence found in telomeres. A fluorescent compound, called silicon-rhodamine, was attached to the PIP. The probe, called SiR-TTet59B, binds to telomeres in living cells. When the low-intensity near-infrared light is shone on the cells, the silicon-rhodamine fluoresces, showing the telomeres in action.

"Our study on this programmable, near-infrared probe creates opportunities to use these molecules in biological and medical applications," says iCeMS bioengineer Ganesh Pandian Namasivayam.

The team used their probe to observe telomere dynamics during different phases of cell division and to gauge telomere length by measuring the fluorescence intensity. Being able to visualize telomere length was both surprising and exciting, says Namasivayam, as it can be developed to create an efficient and robust approach for detecting severe telomere shortening in diseases, such as age-related retinal degeneration, with low energy light.

Since PIPs can be designed to target any DNA sequence in the genome by changing their arrangement, the scientists anticipate the approach can be adapted to make near-infrared fluorescent probes for visualizing other important DNA sequences related to disease.