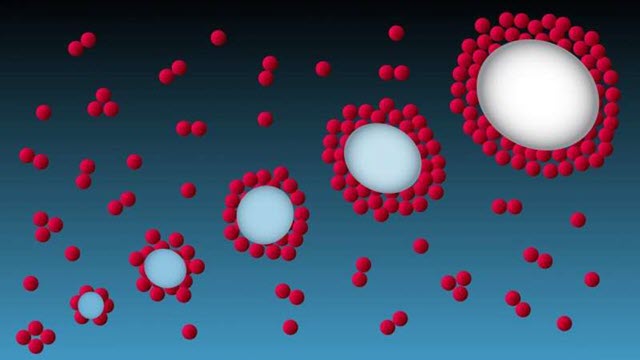 This shows the size-induced transition to metallicity that takes place in a universal manner for all metallic elements, as gauged by the polarizability-based characteristic called degree of metallicity. As the clusters grow in size, they gradually become metallic and expel an external electric field from their interior (the Faraday cage effect in metals)Credit: Argonne National Laboratory

Imagine if you could look at a small amount of an unidentified chemical element—less than 100 atoms in size—and know what type of material the element would become in large quantities before you actually saw the larger accumulation.

That thought has long animated the work of Julius Jellinek, senior scientist emeritus in the Chemical Sciences and Engineering division at the U.S. Department of Energy's (DOE) Argonne National Laboratory. His recent discovery with longtime collaborator Koblar Jackson, a professor in the Department of Physics at Central Michigan University, has the potential to dramatically impact the discipline of nanoscale science.

According to Jellinek, the classification of elements and materials in bulk quantities into different types—metals, semiconductors, and insulators—is well established and understood. But the identification of types of materials on the nanoscale is not so straightforward. In fact, even though the term "nanomaterials" is broadly used, nanoscale materials science has yet to be fully developed.

"Elements and compounds in very small quantities, or nanoquantities, behave very differently from their bulk counterparts," Jellinek explained. For example, small atomic clusters of elements that are metals in bulk quantities only take on metallic characteristics as they grow in size.

This phenomenon is known as size-induced transition to metallicity, and it prompted Jellinek and Jackson to ask: Is it possible to predict what type of material an unidentified element will be in bulk quantities solely based on the properties it exhibits over a limited range of the subnano to nano size régime?

The answer turned out to be an emphatic, and somewhat surprising, "yes."

In their paper, "Universality in size-driven evolution towards bulk polarizability of metals" published as a Communication in the October 7, 2018, issue of Nanoscale, Jellinek and Jackson showed that by using their previously developed atomic-level analysis of polarizability, they could predict whether an unidentified element would be a metal or non-metal in bulk quantities by looking at the polarizability properties of its small clusters. (Polarizability describes how systems and materials respond to an external electric field.)

Moreover, if an unidentified element will be a metal in bulk, using the same small-size polarizability data one can establish its exact chemical identity.

Another striking discovery reported in the paper is that clusters of all metallic elements evolve to the bulk metallic state in a universal manner, as gauged by a polarizability-based characteristic Jellinek and Jackson call the "degree of metallicity." Said Jellinek: "We introduced a new universal constant and new universal scaling equations into the physics of metals."

The new scaling equations make it easy and straightforward for scientists to determine the polarizability of any size cluster of any metallic element based on the element's corresponding bulk polarizability. In the past, this would have required lengthy—and costly—calculations for each individual case. "What would have taken days, weeks or even months to cover a range of sizes now takes a fraction of a second using these universal equations," Jellinek said.

Perhaps most significantly, the study represents a major step in building-up the foundations of nanoscale materials science; it makes a fundamental contribution to the understanding of size evolution toward the bulk metallic state. (Jellinek said the study includes a provision for possible exceptions—what he calls "exotic metals"—should they be found in the future.)

For Jellinek personally, after more than 31 years at Argonne and having recently assumed an emeritus position, the discovery was particularly satisfying—and surprising, because originally he and Jackson were expecting to find something else.

"At first we were hoping to establish commonality on a smaller scale within different groups of metallic elements, and we were disappointed the results were not fulfilling that expectation," he said. "But then we saw that the different groups were behaving in a universal way. In science, when something emerges differently than what you expect that often turns out to be new and interesting. However, it is very rare to discover something that is universal."

Jellinek called the result one of the finest things he has done in his long and distinguished career, adding: "This is why it's fun to be a scientist. When you get something fundamental and truly new, it's a reward that nothing else can replace. The next task is to try to uncover possible commonalities, maybe even universality, in size-evolution to the bulk state for elements that are not metals."