A research team including research scientist Atsuko Kobayashi from the Earth-Life Science Institute (ELSI) at Tokyo Institute of Technology, Japan, and research scientist Mizuho Koike from the Institute of Space and Astronautical Science at Japan Aerospace Exploration Agency, have found nitrogen-bearing organic material in carbonate minerals in a Martian meteorite. This organic material has most likely been preserved for 4 billion years since Mars' Noachian age. Because carbonate minerals typically precipitate from the groundwater, this finding suggests a wet and organic-rich early Mars, which could have been habitable and favorable for life to start.

For decades, scientists have tried to understand whether there are organic compounds on Mars and if so, what their source is. Although recent studies from rover-based Mars exploration have detected strong evidence for Martian organics, little is known about where they came from, how old they are, how widely distributed and preserved they may be, or what their possible relationship with biochemical activity could be.

Martian meteorites are pieces of Mars' surface that were themselves blasted into space by meteor impacts, and which ultimately landed on Earth. They provide important insights into Martian history. One meteorite in particular, named Allan Hills (ALH) 84001, named for the region in Antarctica where it was found in 1984, is especially important. It contains orange-colored carbonate minerals, which precipitated from salty liquid water on Mars' near-surface 4 billion years ago. As these minerals record Mars' early aqueous environment, many studies have tried to understand their unique chemistry and whether they might provide evidence for ancient life on Mars. 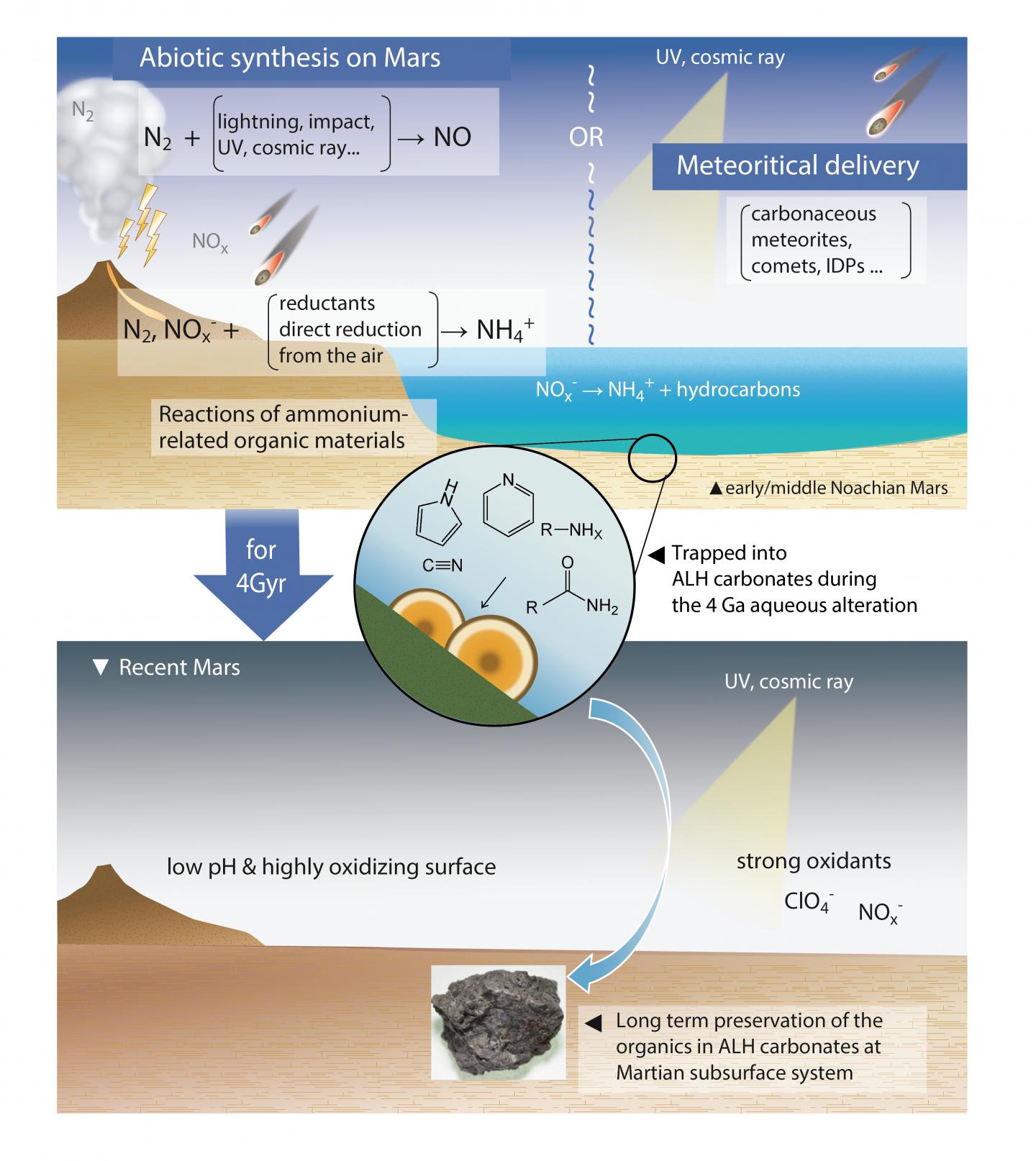 Schematic images of early (4 billion years ago) and present Mars. The ancient N-bearing organics were trapped and preserved in the carbonates over a long period of time.
Koike et al. (2020) Nature Communications

However, previous analyses suffered from contamination with terrestrial material from Antarctic snow and ice, making it difficult to say how much of the organic material in the meteorite were truly Martian. In addition to carbon, nitrogen (N) is an essential element for terrestrial life and a useful tracer for planetary system evolution. However, due to previous technical limitations, nitrogen had not yet been measured in ALH84001.

This new research conducted by the joint ELSI-JAXA team used state-of-the-art analytical techniques to study the nitrogen content of the ALH84001 carbonates, and the team is now confident they have found the first solid evidence for 4-billion-year-old Martian organics containing nitrogen.

Terrestrial contamination is a serious problem for studies of extraterrestrial materials. To avoid such contamination, the team developed new techniques to prepare the samples with. For example, they used silver tape in an ELSI clean lab to pluck off the tiny carbonate grains, which are about the width of a human hair, from the host meteorite. The team then prepared these grains further to remove possible surface contaminants with a scanning electron microscope-focused ion beam instrument at JAXA. They also used a technique called nitrogen K-edge micro X-ray absorption near edge structure (μ-XANES) spectroscopy, which allowed them to detect nitrogen present in very small amounts and to determine what chemical form that nitrogen was in. Control samples from nearby igneous minerals gave no detectable nitrogen, showing the organic molecules were only in the carbonate. 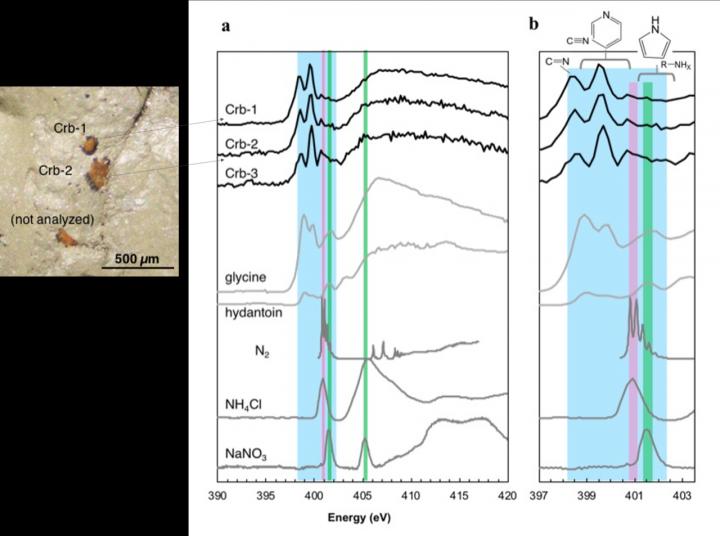 After the careful contamination checks, the team determined the detected organics were most likely truly Martian. They also determined the contribution of nitrogen in the form of nitrate, one of the strong oxidants on current Mars, was insignificant, suggesting the early Mars probably did not contain strong oxidants, and as scientists have suspected, it was less-oxidizing than it is today.

Mars' present surface is too harsh for most organics to survive. However, scientists predict that organic compounds could be preserved in near-surface settings for billions of years. This seems to be the case for the nitrogen-bearing organic compounds the team found in the ALH84001 carbonates, which appear to have been trapped in the minerals 4 billion years ago and preserved for long periods before finally being delivered to Earth.

The team agrees that there are many important open questions, such as where did these nitrogen-containing organics come from? "There are two main possibilities: either they came from outside Mars, or they formed on Mars," Kobayashi explains. "Early in the Solar System's history, Mars was likely showered with significant amounts of organic matter, for example from carbon-rich meteorites, comets, and dust particles. Some of them may have dissolved in the brine and been trapped inside the carbonates."

Koike, the research team lead, adds that, alternatively, chemical reactions on early Mars may have produced the N-bearing organics on-site. Either way, they say, these findings show there was organic nitrogen on Mars before it became the red planet we know today; early Mars may have been more "Earth-like," less oxidizing, wetter, and organic-rich. Perhaps it was "blue."