Apr 16, 2020University of Alabama at Birmingham 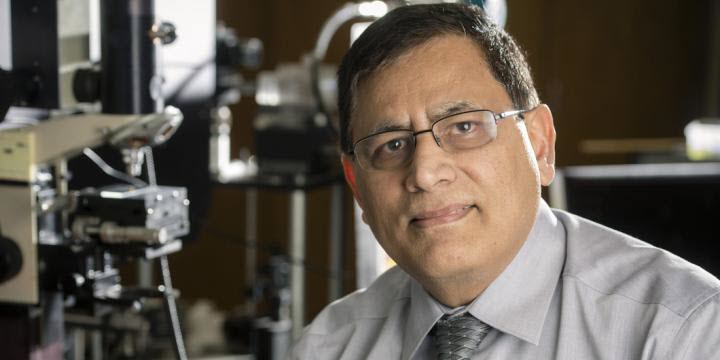 BIRMINGHAM, AL — Yogesh Vohra, PhD, uses microwave-plasma chemical vapor deposition to create thin crystal films of never-before-seen materials. This effort seeks materials that approach a diamond in hardness and are able to survive extreme pressure, temperature, and corrosive environments. The search for new materials is motivated by the desire to overcome limitations of diamond, which tends to oxidize at temperatures higher than 600 degrees Celsius and also chemically reacts with ferrous metals.

Vohra, a professor and university scholar in the University of Alabama at Birmingham Department of Physics, now reports, in the journal Scientific Reports, synthesis of a novel boron-rich boron-carbide material. This film, grown on a one-inch wafer of silicon, is chemically stable, has 37 percent the hardness of cubic diamond, and acts as an insulator.

Equally important, experimental testing of the new material—including X-ray diffraction and measurement of the material's hardness and Young's modulus—agrees closely with predicted values computed by the UAB team of researchers led by Cheng-Chien Chen, PhD, assistant professor of physics at UAB. The predicted values come from first-principles analysis, which uses supercomputer-driven density functional theory calculations of positively charged nuclei and negatively charged electrons. Thus, Vohra, Chen, and colleagues have both made a novel boron-carbon compound and have shown the predictive power of first principles analysis to foretell the properties of these materials.

Related Article: Diamonds in Your Devices: Powering the Next Generation of Energy Storage

The new material has the chemical formula B50C2, which means 50 atoms of boron and two atoms of carbon in each subunit of the crystal structure. The crucial issue is where the two carbon atoms are placed in each crystal subunit; insertion of the carbons at other sites leads to materials that are unstable and metallic. The precise placement of carbons is achieved by varying growth conditions.

The current B50C2 material was grown in a microwave plasma chemical vapor deposition system using hydrogen as the carrier gas and diborane—90 percent hydrogen gas, 10 percent B2H6 and parts per million carbon—as the reactive gas. Samples were grown at a low pressure equivalent to the atmospheric pressure 15 miles above Earth. The substrate temperature was about 750 degrees Celsius.

"Boron-rich boron-carbide materials synthesis by chemical vapor deposition methods continues to be relatively unexplored and a challenging endeavor," Vohra said. "The challenge is to find the correct set of conditions that are favorable for growth of the desired phase."

"Our present studies provide validation of the density functional theory in predicting stable crystal structure and providing a metastable synthesis pathway for boron-rich boron-carbide material for applications under extreme conditions of pressure, temperature, and corrosive environments."

- This press release was originally published on the UAB News website