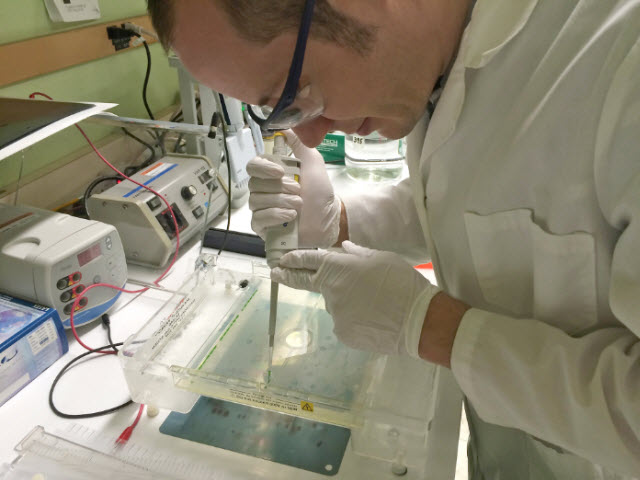 “We now have a quick and easy-to-use tool that we can employ in any environment to test for the presence of microorganisms capable of methylating mercury and determine how abundant they are,” said ORNL’s Geoff Christensen, a post-doc and lead author of a paper published in Applied and Environmental Microbiology.

In 2013, ORNL researchers reported in Science on the discovery of two genes known to transform inorganic mercury into its highly toxic organic form. Development of the newly validated probes further advances research to protect human health.

For this study, researchers tested the probes against 31 strains of microorganisms for which they know the ones that produce methylmercury and scored a 94 percent confirmation rate. This validation procedure is critical to the next step of moving the probes into the field to help determine the amount of methylmercury likely to be generated in any given environment.

One potential application will be to test outgoing water, filters, and sediment at wastewater treatment plants, which are known to produce methylmercury, said co-author Dwayne Elias of ORNL’s Biosciences Division. The test could be done inexpensively and quickly and provide crucial information to environmental managers, utilities, and governments.

“We have found these genes at a wastewater treatment plant, so it’s highly likely that they are present in others,” Elias said.

The development of these molecular probes and their validation represents another step toward better understanding the microbial mercury methylation process and devising ways to reduce the health risk. Last year, ORNL and the Smithsonian Environmental Research Center reported on genes able to methylate mercury in many of the 3,500 environments they studied. Researchers found that the mercury methylation genes are abundant in nearly every oxygen-free environment on Earth.

Elias also noted that this technology could help in ongoing remediation efforts at the adjacent Y-12 National Security Complex. DOE estimates that about 330,000 kilograms—nearly 728,000 pounds—were released into the environment between 1950 and 1963 as part of the lithium separation process during the Cold War.

Mercury is a toxin that spreads around the globe mainly through the burning of coal, industrial use and through natural processes such as volcanic eruptions. The chemical element bioaccumulates in aquatic food chains, especially in large fish. Various forms of mercury are widely found in sediments and water.

Related Article: How to Get a Handle on Potential Risks Posed by Fracking Fluids

Co-authors of the paper, titled “Development and Validation of Broad-Range Qualitative and Clade-Specific Quantitative Molecular Probes for Assessing Mercury Methylation in the Environment,” were Ann Wymore, Andrew King, Mircea Podar, Richard Hurt Jr., Ally Soren, Craig Brandt, Steven Brown and Anthony Palumbo of ORNL, Judy Wall of the University of Missouri, and Cynthia Gilmour and Eugenio Santillan of the Smithsonian Environmental Research Center. Funding for this research was provided by DOE’s Office of Science.

UT-Battelle manages ORNL for the DOE's Office of Science. The Office of Science is the single largest supporter of basic research in the physical sciences in the United States, and is working to address some of the most pressing challenges of our time. For more information, please visit http://science.energy.gov/.