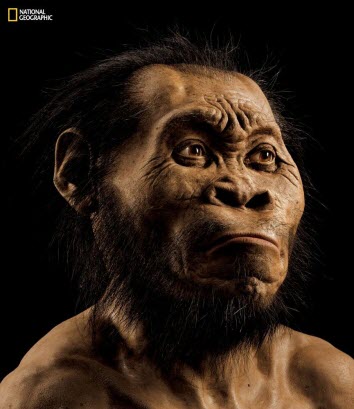 A reconstruction of Homo naledi’s head by paleoartist John Gurche, who spent some 700 hours recreating the head from bone scans. The find was announced by the University of the Witwatersrand, the National Geographic Society and the South African National Research Foundation and published in the journal eLife.Photo credit: Mark Thiessen/National GeographicAn international research team, which includes New York University anthropologists Scott Williams and Myra Laird, has discovered a new species of a human relative. Homo naledi, uncovered in a cave outside of Johannesburg, South Africa, sheds light on the diversity of our genus and possibly its origin.

“This discovery is unprecedented in the sheer number of hominins collected from such a small area in the virtual absence of other animal remains,” says Williams, an assistant professor in NYU’s Department of Anthropology. “That makes this site unique. Moreover, the announcement describes only the tip of the iceberg of analyses that will come, and we hope that is also true of the cave itself and the material that it still holds.”

The team’s findings, which are published in two papers in the journal eLife, were announced by South Africa’s University of the Witwatersrand, the National Geographic Society, and the South African National Research Foundation.

The discovery also indicates that H. naledi intentionally deposited bodies of its dead in a remote cave chamber—behaviors previously thought limited to humans.

Lee Berger, a research professor in the Evolutionary Studies Institute at the University of the Witwatersrand and a National Geographic Explorer-in-Residence, led the expeditions that recovered the fossils—more than 1,500 bones belonging to at least 15 individuals.

The endeavor, the Rising Star expedition, involved an international team of scientists, including the six “underground astronauts” who excavated and retrieved the fossils shortly after their discovery in late 2013.

Williams worked at the excavation identifying and processing the material as it came out of the cave. In addition, both Williams and Laird attended a 2014 workshop, in which scholars from around the world traveled to Johannesburg to carry out studies on the fossils. At the gathering, Williams led the study of the axial skeleton, which included the vertebrae and ribs, while Laird, a doctoral candidate, worked on the skulls.