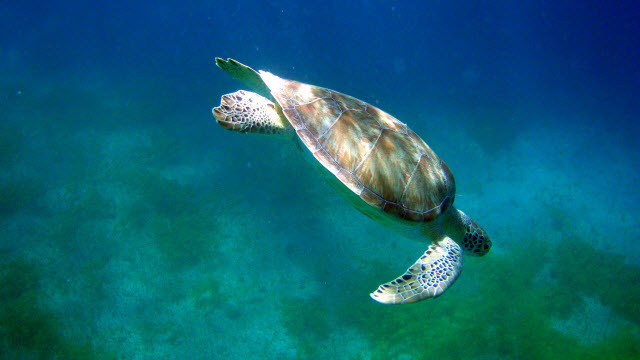 Populations of green sea turtles living in the eastern region of the Pacific Ocean have rebounded in recent years, but their numbers remain dangerously depleted. Research by led by biologists at the University of California San Diego and NOAA’s National Marine Fisheries Service is offering previously unknown information about where these turtles live and how they use their habitats, key data that will aid future conservation efforts. 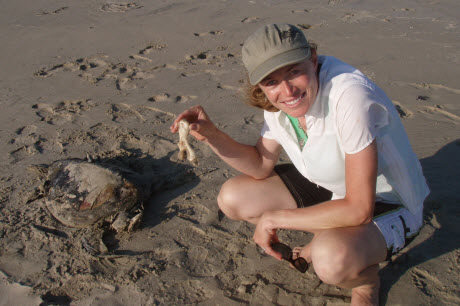 Cali Turner Tomaszewicz inspects a green sea turtle bone.Photo courtesy of the University of California San Diego East Pacific green sea turtles are born in Mexico and spend their lives in the waters along Mexico and the United States, including off the coast of San Diego and in San Diego Bay. Using a technique recently developed by Turner Tomaszewicz, the researchers analyzed the bones of dead green sea turtles washed ashore along the Baja California peninsula. The approach combines bone dating, or “skeletochronology,” and the sequential sampling of annual growth rings for chemical signatures (stable carbon and nitrogen isotope ratios). The signatures in the growth rings revealed the animal’s foraging habits through its life span, not unlike extracting the life history from tree rings. These and complimentary techniques allowed the researchers to reconstruct a multi-year analysis of past green sea turtle residency patterns, demographics and ecological information.

The results, published in the journal Marine Ecology Progress Series, answer vital, previously unknown aspects of the green sea turtles’ habitats, including their age when they move into nearshore habitats, when they start breeding and whether they use nearshore or deeper habitats for feeding. According to the researchers, the new insights about the life-history of green sea turtles in this region have strong applications to the conservation, management, and ongoing recovery of this endangered population.

The analysis shows that these green sea turtles spend approximately three to five years as juveniles in the open ocean before settling in nearshore habitats. Smaller turtles at the population’s mainland nesting sites mature and begin breeding at 17 years of age, while larger turtles nesting on the island rookeries begin breeding at 30 years.

Related Article: Scientists Discover Eggs of One of World's Most Endangered Turtles

“This is the first empirical evidence showing that turtles in this population mature at very different rates at the two distinct nesting sites,” Turner Tomaszewicz added. “This could really affect the ability of this population to recover because the nesting site with turtles that mature slower (30 years) will take much longer to begin contributing to the population increase and recovery.” 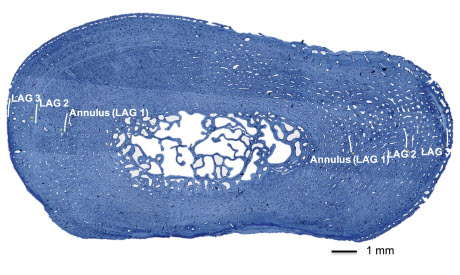 Signature growth layers in East Pacific green sea turtle bones allowed researchers to study the animal’s foraging habits.Image courtesy of the University of California San DiegoMost importantly, the data revealed that these turtles spend most of their time eating in the offshore waters of the Gulf of Ulloa, directly adjacent to the beach where they were found dead. The finding, a surprise to the researchers, carries critical conservation implications since the turtles’ cause of death is presumed to be from being caught in nets (bycatch) from fishing boats in the Gulf of Ulloa.

“The results of our work show that some green turtles, not just loggerhead turtles, are using this habitat for many years at a time and therefore are also at risk of bycatch and in need of protection,” said Turner Tomaszewicz. “Fortunately, much work has been done in this region to reduce these bycatch deaths.”

“This more carnivorous diet likely helps these turtles grow faster and mature sooner, yet also comes with the tradeoff for being more at risk of becoming fisheries bycatch,” said Turner Tomaszewicz.

The researchers previously applied their novel technique to North Pacific loggerhead turtles (Turner Tomaszewicz et al. 2015, 2017) and now intend to apply their methods to investigate other turtle populations throughout the Pacific.

“Our work really highlights the exciting use of marine vertebrates as passive data collectors for ocean scientists. As animals move through and utilize food from different areas within the oceans, the biochemical signals of those habitats are recorded in the body parts of the animals,” said Kurle, a researcher in the Section of Ecology, Behavior and Evolution in the Division of Biological Sciences. “Analyses of those chemical signatures, and matching them with specific time periods, allows us to reconstruct not only the animals’ movement patterns and diet, but also to better understand the biogeochemical processes characterizing various marine environments. These types of data can be really difficult to obtain using conventional methods that require labor and resource-intensive sampling over long time scales, but with our approach the animals are basically collecting data for us as they make their living in the sea.”