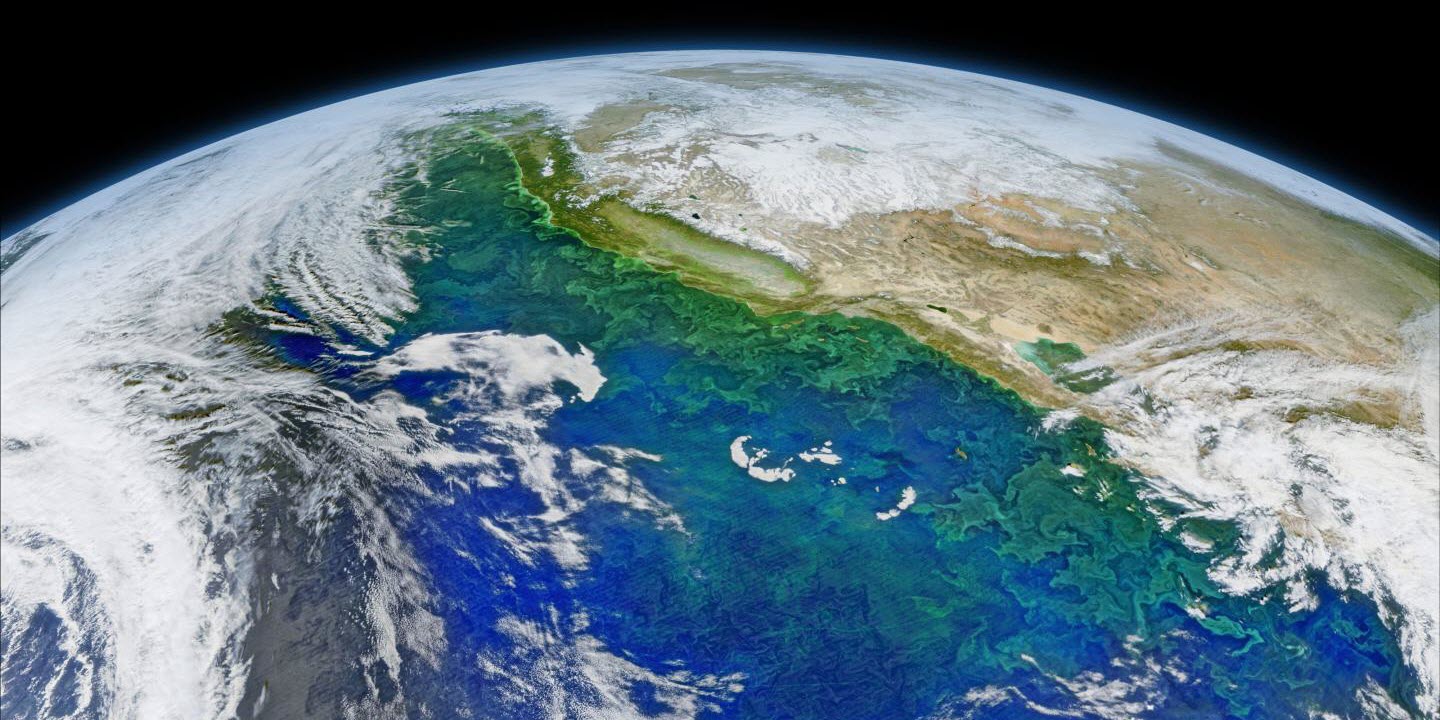 On February 8, 2016, the Visible Infrared Imaging Radiometer Suite (VIIRS) on the Suomi NPP satellite captured several images of blooming phytoplankton and swirling currents along the coast of California and western Mexico. The images were stitched together into a composite built with data from the red, green, and blue wavelength bands on VIIRS, along with chlorophyll data. A series of image-processing steps highlighted the color differences and subtle features in the water.
NASA image by Norman Kuring, NASA's Ocean Color Web

University of Colorado (CU) Boulder researchers have developed a method that could enable scientists to accurately forecast ocean acidity up to five years in advance. This would enable fisheries and communities that depend on seafood negatively affected by ocean acidification to adapt to changing conditions in real time, improving economic and food security in the next few decades.

Previous studies have shown the ability to predict ocean acidity a few months out, but this is the first study to prove it is possible to predict variability in ocean acidity multiple years in advance. The new method, described in Nature Communications, offers potential to forecast the acceleration or slowdown of ocean acidification.

"We've taken a climate model and run it like you would have a weather forecast, essentially—and the model included ocean chemistry, which is extremely novel," said Riley Brady, lead author of the study, and a doctoral candidate in the Department of Atmospheric and Oceanic Sciences.

For this study the researchers focused on the California Current System, one of four major coastal upwelling systems in the world, which runs from the tip of Baja California in Mexico all the way up into parts of Canada. The system supports a billion-dollar fisheries industry crucial to the US economy.

"Here, you've got physics, chemistry, and biology all connecting to create extremely profitable fisheries, from crabs all the way up to big fish," said Brady, who is also a graduate student at the Institute of Arctic and Alpine Research (INSTAAR). "Making predictions of future environmental conditions one, two, or even three years out is remarkable, because this is the kind of information that fisheries managers could utilize."

The California Current System is particularly vulnerable to ocean acidification due to the upwelling of naturally acidic waters to the surface.

"The ocean has been doing us a huge favor," said study co-author Nicole Lovenduski, associate professor in atmospheric and oceanic sciences and head of the Ocean Biogeochemistry Research Group at INSTAAR.

The ocean absorbs a large fraction of the excess carbon dioxide in the Earth's atmosphere derived from human activity. Unfortunately, as a result of absorbing this extra man-made carbon dioxide—24 million tons every single day—the oceans have become more acidic.

"Ocean acidification is proceeding at a rate 10 times faster today than any time in the last 55 million years," said Lovenduski.

Within decades, scientists are expecting parts of the ocean to become completely corrosive for certain organisms, which means they cannot form or maintain their shells.

"We expect people in communities who rely on the ocean ecosystem for fisheries, for tourism and for food security to be affected by ocean acidification," said Lovenduski.

This spells trouble for the California Current System, with its naturally corrosive waters. This extra acidification could push its fragile ecosystems over the edge.

The fortune and frustration of forecasting

People can easily confirm the accuracy of a weather forecast within a few days. The forecast says rain in your city? You can look out the window.

But it's a lot more difficult to get real-time measurements of ocean acidity and figure out if your predictions were correct.

But this time, CU Boulder researchers were able to capitalize on historical forecasts from a climate model developed at the National Center for Atmospheric Research. Instead of looking to the future, they generated forecasts of the past using the climate model to see how well their forecast system performed. They found that the climate model forecasts did an excellent job at making predictions of ocean acidity in the real world.

However, these types of climate model forecasts require an enormous amount of computational power, manpower, and time. The potential is there, but the forecasts are not yet ready to be fully operational like weather forecasts.

And while the study focuses on acidification in one region of the global ocean, it has much larger implications.

States and smaller regions often do their own forecasts of ocean chemistry on a finer scale, with higher resolution, focused on the coastline where fisheries operate. But while these more local forecasts cannot factor in global climate variables like El Niño, this new global prediction model can.

This means that this larger model can help inform the boundaries of the smaller models, which will significantly improve their accuracy and extend their forecasts. This would allow fisheries and communities to better plan for where and when to harvest seafood, and to predict potential losses in advance.

"In the last decade, people have already found evidence of ocean acidification in the California current," said Brady. "It's here right now, and it's going to be here and ever present in the next couple of decades."